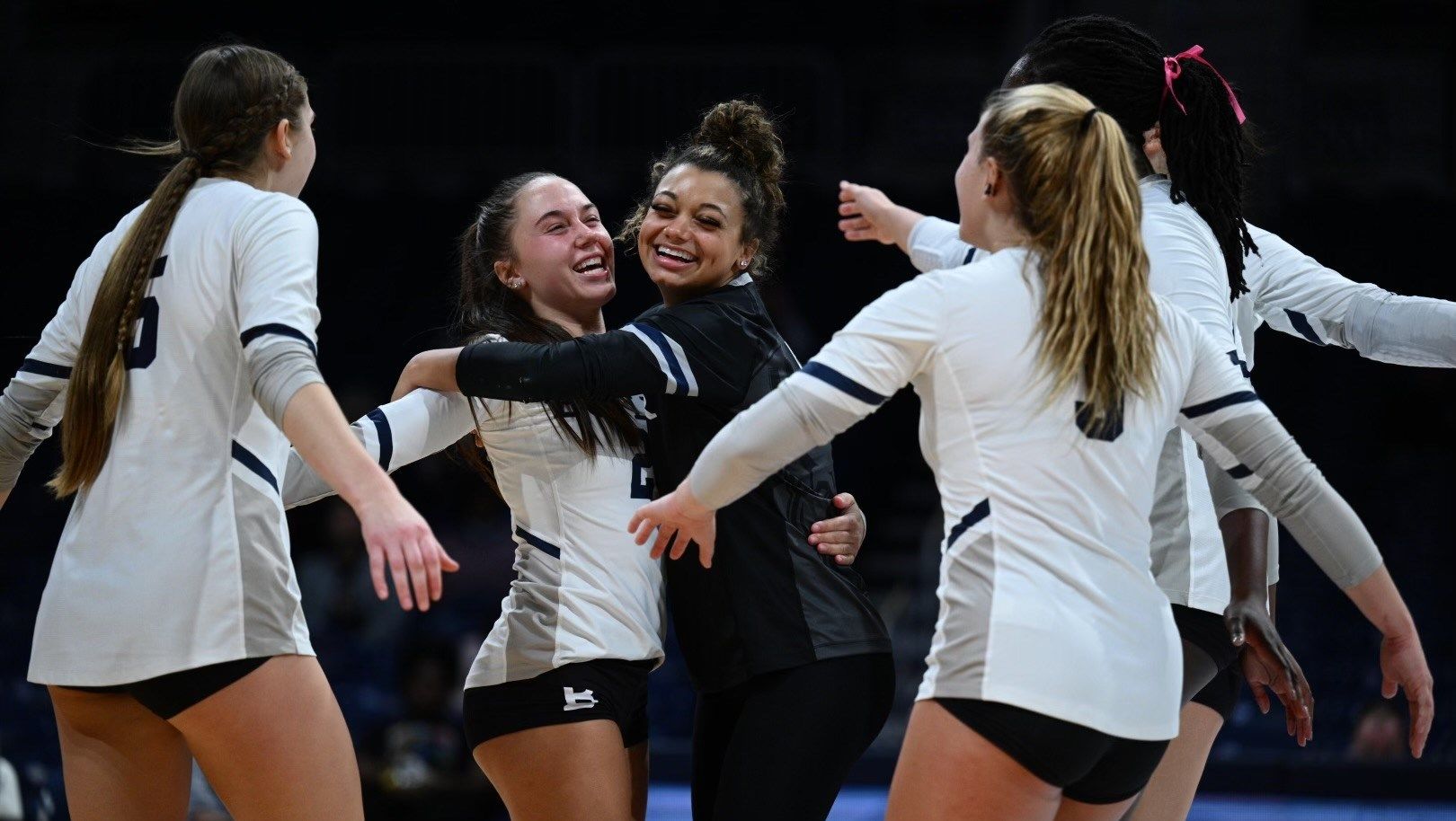 After a tough four-game road stretch, the Bulldogs returned home and started the four-game home stand taking two wins in conference. On Friday, Oct. 7 and Sunday, Oct. 9, Georgetown and Villanova took a trip to Hinkle to take on Butler, respectively.

On Friday night, the Bulldogs got off to a hot start against the visiting Hoyas. The Bulldogs jumped out to an early 9-3 lead before the Hoyas would go on an 8-4 run putting them within two at 11-13. That didn’t matter though as back-to-back aces by first-year Brooklyne Darby and back-to-back kills by junior Amina Shackelford would help an 8-0 Bulldog run giving them a 21-13 cushion. Kills from sophomore Destiny Cherry and first-year Cora Taylor put the first set away 25-16. Five bulldogs recorded multiple kills in the opening set.

The second set opened with an early 4-4 tie, but an 8-0 run sparked by two Cherry kills and three Butler blocks gave the Bulldogs an early 12-4 cushion. The Hoyas tried to claw their way back getting within three at 24-21, but it was too much, too late. Cherry closed out the set with a set from Taylor. Cherry’s four kills and five Butler blocks gave the Bulldogs a 2-0 set advantage with a 25-21 win.

In the third set, the Hoyas came out of the break hitting .324 in the set compared to .081 and .062 in the first two, respectively. After an early 3-3 tie, the Hoyas led the entire time taking the set 25-17. Butler’s 10 attack errors compared to Georgetown’s zero contributed to the loss. Sophomore Giselle Williams led the Hoya attack with five kills.

Despite the slow start to the second half of the match, the Bulldogs came out of the gate strong with kills from Shackelford and Cherry giving Butler an early 5-3 lead. However, the Hoyas would go on an early 10-4 run with a score of 13-9 halfways through the set. A 7-0 Butler run powered by kills from Shackelford and senior Marissa Guisti essentially put the game on ice at 16-13. From there, the Bulldogs never trailed and took the match 25-17 on a Hoya attack error.

On Sunday afternoon, the Bulldogs continued their Big East run against the Villanova Wildcats.

The opening set featured 11 ties and five lead changes in the mix of kills and aces. Butler trailed late in the set 20-22, but kills from Shackelford and Cherry tied the game at 22-22. After a kill from senior Megan Sheridan and sophomore Jenna Splitt’s ace, Butler was within one of an opening set win. However, Nobelsville, Ind. native sophomore Rose Crist would pull the Wildcats within one at 23-24. On the next point, Cherry recorded another set-point win on a kill giving the Bulldogs a 25-23 victory in the opening frame.

In the second set, Butler and Villanova had six lead changes with the last one coming at 17-17 late. The Wildcats would go on an 8-2 run to close out the set 25-19 on junior Madeline Barber’s kill evening the match one set apiece.The Bulldogs recorded a -0.026 hitting percentage compared to the Wildcats’ 0.176.

After the second set loss, the Bulldogs started the third set strong with four kills helping the team take an early 6-2 lead. However, Villanova went on a 7-1 run propelling them ahead of Butler 9-8. The second set continued with mini runs and trading points until eventually reaching a 24-24 tie. Despite the tense action late, Shackelford and Guisti layed down back-to-back kills to record the final two points in a 26-24 set win.

The Bulldogs took the momentum into the fourth set jumping out to an early 12-4 lead. Shackelford posted five kills in the spurt. First-year Rylie Tam recorded an ace that put the Bulldogs at 24-12 before redshirt sophomore Autumn Flowers put down the kill, finishing off the Wildcats in four sets 25-23, 19-25, 26-24 and 25-13. Shackelford hit .324 with 16 kills in the match .

On Monday Oct. 10, Taylor was named Big East Freshman of the Week for her 76 assists over the weekend putting her sixth in the Big East assist rankings – the most of any freshmen.

Butler will finish off the four-game home stand this weekend with games against Seton Hall and St. John’s. The Bulldogs will face Seton Hall on Friday at 6 p.m. before facing the Red Storm on Sunday at 1 p.m.