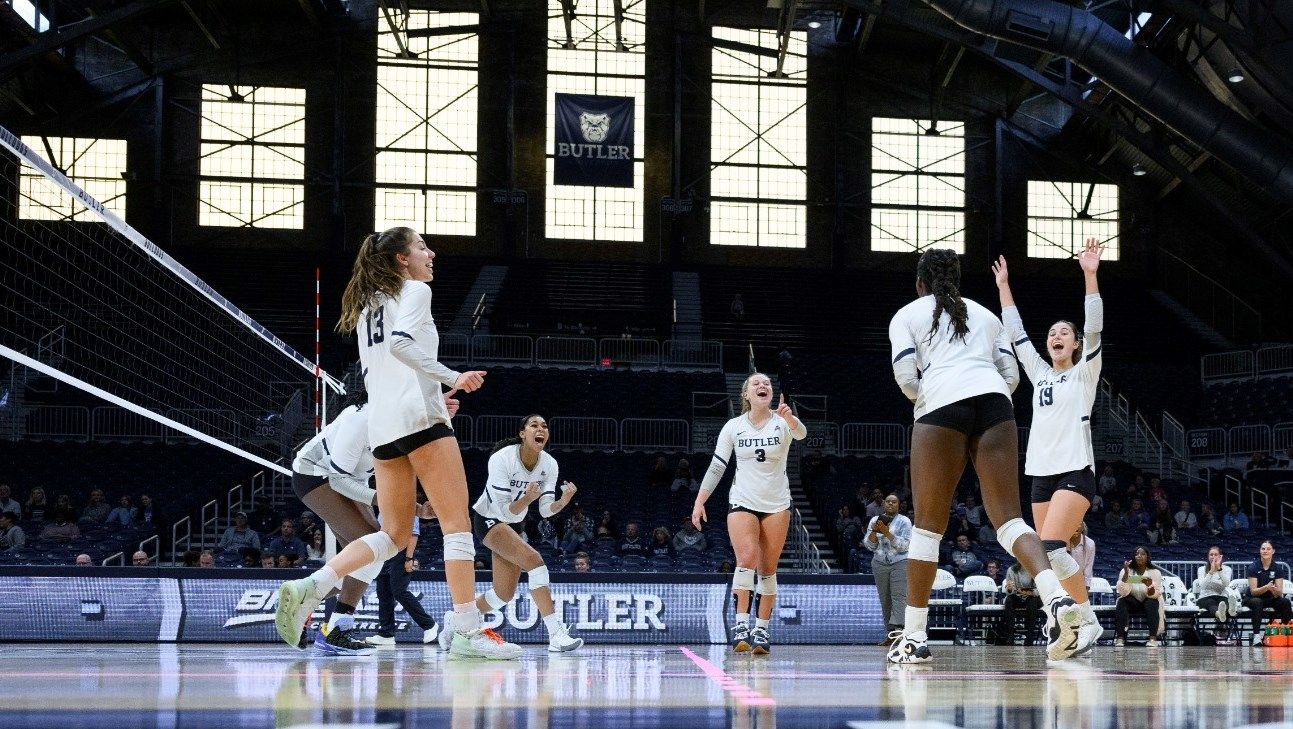 The women’s volleyball team celebrates a point against Georgetown on Oct.7.  Photo courtesy of Zach Bolinger of Butler Athletics.

This past weekend, the women’s volleyball team traveled east for back-to-back games with St. John’s and Seton Hall looking to stay afloat in the Big East standings. Entering the weekend competition, Butler sat in sixth sandwiched between their opponents.

On Friday, Nov. 4, the Bulldogs headed out to Queens, N.Y. looking to switch spots with St. John’s in the standings.

St. John’s opened the match strong with a 5-1 lead anchored by two kills from first-year Lucrezia Lodi. For the remainder of the set, the Bulldogs found themselves climbing back from an early deficit and were within two at 19-21. Unfortunately for the Dawgs, three late kills from Lodi would end the set 25-20, St. John. Butler scored 16 of their 20 points on 12 kills and six blocks with the latter outscoring the Red Storm 6-0.

The two teams started the second set trading points resulting in 11 ties up until 15-15 when St. John’s would score six straight points on their own. The Dawgs came back with their own late rally and rattled off four straight including a solo block from sophomore Destiny Cherry to cut the deficit down to two at 19-21. Butler continued to keep St. John’s at the edge of their feet, fighting their way to within two at 22-24. After a Red Storm timeout, Lodi found the open floor to put down another set-point kill ending the Bulldog’s threat. With the 25-22 set win, St. John’s nabbed an early 2-0 match lead to head into the break. Junior Amina Shackelford led the Bulldog offense with six kills in the set.

Butler had a rough start coming out of the break with three straight attack errors and a bad pass to give St. John’s an early 4-0 lead. The Bulldogs would be able to dig themselves out of their hole and tie the set at 6-6 with two kills from Shackelford in the span. However, the Dawgs were not able to take the lead and trailed the rest of the way, dropping the set 25-17. The Red Storm hit .333 in the set compared to the Bulldog’s .179 hitting percentage. Shackelford had four kills in the set.

Shackelford led the Bulldogs with 15 kills hitting for a .333 hitting percentage. Sophomore Mariah Grunze added 10 kills for the Butler offense.

St. John’s previously swept Butler during their first meeting at Hinkle on Oct. 16.

Following Friday’s game, Butler headed to the East Coast on Saturday, Nov. 5, for a crucial matchup against Seton Hall nearing the end of conference play.

The Dawgs started the match with a 2-5 deficit, but then traded points with the Pirates to get within two at 7-9. Four straight kills and a block would propel a 5-0 Bulldog run to take a 12-9 lead. From that moment on, Butler would lead the rest of the set despite a late Seton Hall threat at 21-20. Grunze led the offense with five kills in the set while the defense put up nine blocks.

After a 7-7 tie in the second set, the Pirates went on a 6-2 run leading 13-9 midway through the set. The Bulldogs would fight their way back into the set and tied the set 18-18 late on Shackelford’s ace. Seton Hall scored the next three points to force a Butler timeout. Coming out of the timeout, Grunze laid down two straight kills, graduate student Maddie Renn aced a Pirate and Grunze put down her eighth kill of the set to flip the score 22-21, Butler. Despite the Pirates rattling off two points to take the lead 23-22, the Bulldogs took the next three to win the set 25-23. Grunze hit for a stellar .714 hitting percentage in the set.

Seton Hall jumped out to an early 7-3 lead in the third set. Butler got close to within one at 14-15, but the Pirates would have a 6-3 advantage to take a late 21-17 lead. The Bulldogs did not go down without a fight and went on their own 6-1 lead to grab the lead at 23-22. The two teams tied at both 23 and 24 before two Pirate errors would give the Dawgs the set 26-24, escaping going to a fourth set. Cherry, Grunze and Shackelford combined for 12 of Butler’s 13 kills.

With the sweep, Butler holds sixth place with a 7-7 record in the Big East standings, two games ahead of Seton Hall. If the teams are tied at the end of the regular season, Butler holds the tiebreaker.