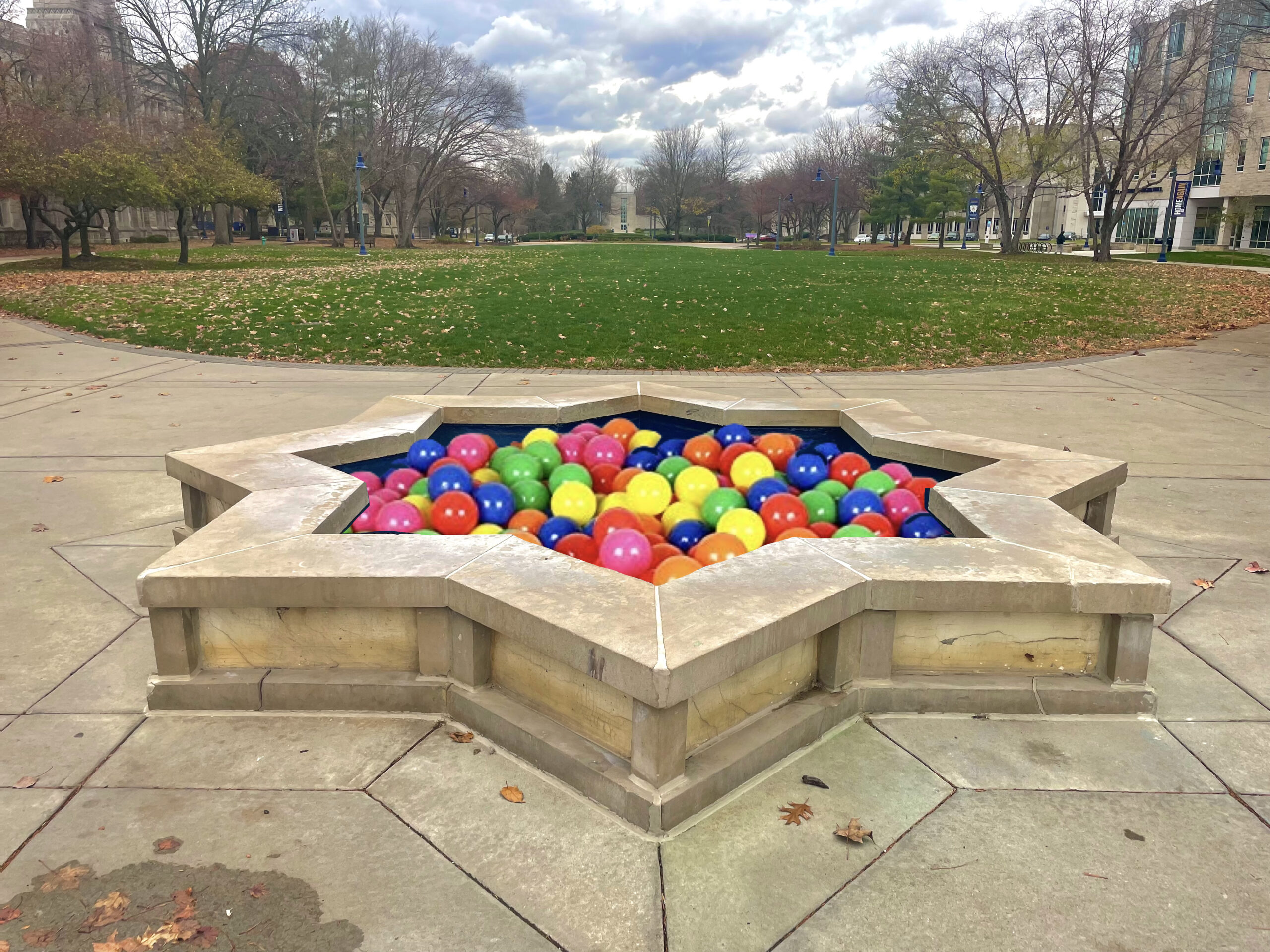 Fun awaits us in the Star Fountain of the future: one filled with balls. Graphic by Hallie Anderson.

SGA seems to only think the ceiling is the limit when it comes to creating different programs and initiatives on campus. I, however, have always thought the universe was the limit. So, as a natural-born creative thinker and problem solver, I’ve taken it upon myself to advise SGA in the creation of future programs.

“I don’t think [SGA has] got their finger on the pulse,” Edmonds said.

SGA’s airport Uber program is the limit of their governmental creativity. It is the most fun thing they’ve done, and it’s not even that fun — it is helpful, though. So let’s spice it up. Let’s make campus joyful.

SGA needs to tune into the needs and wants of the people. I can tell you what the people want..

For starters, Star Fountain is empty right now. Why? Because SGA hates fun. I know this is true because Star Fountain lacks shiny, plastic, multicolored balls in its empty depths. In short, we need a ball pit in Star Fountain.

We have conquered the worst of the COVID-19 pandemic. It’s time to bring back the unsanitary. Let’s build back our immune systems with the questionable ball pits of our youth. Sure, there are likely many a pathogen lurking alongside those little spheres of joy, but potential exposure is certainly worth the pure childish happiness of diving into a pit of plastic.

For Hannah Ballard, a senior sociology and criminology major, filling just Star Fountain with plastic balls is insufficient. Ballard thinks big. Instead, she would like SGA to replace the disease-ridden water in the Holcomb pond with disease-ridden plastic balls.

“I feel like Star fountain won’t be big enough [for a ball pit],” Ballard said. “The bigger the better.”

SGA needs to ensure the existence of a ball pit somewhere on campus, no matter the location. The fact that they haven’t already accomplished this simple task is honestly appalling. I should expect our leaders to understand that college students and ball pits are like fish and water; they need it to survive.

No matter the cost of this operation, SGA needs to ensure its success. Ballard agrees.

“I don’t think we need really need [something like] another parking garage, [and] the food doesn’t really need to get better,” Ballard said. “I think a ball pit is in our best interest.”

While Butler University has a laundry list of wants and needs, a ball pit should be the university’s primary investment. If that means we go without the shiny new buildings and A-Town food, so be it.

While SGA is busy renovating our campus fountains, they could also look into making the Irwin library fountain a chocolate fountain. Think about the aroma wafting through Irwin during an especially tough study session. That chocolatey scent would deliver the encouragement you need to get an A on any assignment.

“I’ve always been a big supporter of Golden Corral Chocolate fountains,” Deidrich said. “I really like that idea … I would use it [and] dip a nice marshmallow [in the fountain].”

Just as Deidrich suggested with his marshmallow idea, students could bring their own sweet treats to dip into the fountain. This fountain would quickly become just as disease-ridden as the ball pit in Star Fountain. So, not only would the chocolate fountain improve the moods of students, but it would also improve our immune systems.

Next on my agenda for SGA is to bring Coca-Cola products to campus: goodbye, Pepsi. I understand the costliness of Coke products. I understand our commitment to Pepsi. But I am a dreamer, and as such, I believe SGA can accomplish the impossible.

Coca-Cola commits to adding personal touches and a level of attention that aligns deeply with Butler University’s value of human dignity. For that reason — and because it tastes better — SGA should work harder to bring Coca-Cola to campus.

Coke products are and always have been better, and it’s time we all mature enough to realize this.

This is a more controversial policy, but I feel so strongly about this initiative that I’ve decided to share it regardless. Butler Blue IV’s successor needs to be the Irwin Goose. We should keep our brand fresh and up-to-date. Dogs are great, but they’re expected; we need to harness the power of the unexpected. We need the Irwin Goose.

The goose is a proud and outspoken campus leader, and we should honor our feathered friend for their relentless advocacy. However, Edmonds interprets Irwin Goose’s outspokenness as aggression. While I disagree, everyone is certainly entitled to their own opinion.

“Half the reason I picked Butler [University] was because of Blue,” Edmonds said. “I have to say if the goose had been the mascot over Blue, I might have made a different choice.”

While our enrollment might go down the second we transition our mascot from loveable bulldog to threatening goose, I believe that this decline would just weed out the infidels — the unfaithful. If you can’t support the Irwin Goose, then the Irwin Goose doesn’t want you here anyway.

Ballard argues that the Irwin Goose’s aggression could even intimidate other schools with their loud honking, making Butler University sports teams fiercely competitive.

“[Geese] are scary,” Ballard said. “Maybe that’s a good thing because then we’ll be scary to other schools, and then that will make us better in sports.”

The Irwin Goose is a leader. Let’s treat them accordingly; if they can’t be our mascot, then at least let them receive some sort of medal of honor. After all, that is essentially a government’s primary function: bestowing awards and medals upon those who deserve them.

This next idea will likely be more popular than the Irwin Goose becoming our mascot. SGA must begin an annual on-campus concert with Snoop Dogg and Martha Stewart. This dynamic duo will be sure to strike joy into the hearts of all Butler students.

Instead of living for homecoming each year, students will live for the annual joy of seeing Mr. Snoop and Ms. Martha. This yearly concert will go down in history as the greatest student government-sponsored program in the nation.

I understand that Martha Stewart’s criminal record could pose a slight concern, but I am sure she would be on her best behavior for the students of Butler University.

The event would take place on the mall to encourage an atmosphere like that of orientation week’s black light bingo or rave party — hype. Many other universities host stars regularly: it’s practically expected. Unfortunately, Butler University has failed its student population by depriving us of celebrity guests.

We must demand change. The Snoop Doggs and Martha Stewarts of the world should be here at Butler University, and SGA can and should make that happen for us.

A concert must take place on the mall so all of Butler University can relive the glory days of their first-year orientation. Dancing on the grass of the mall, dripping with sweat and singing along to old hits is an out-of-body experience we all need in our lives. If we throw in some glow sticks and black lights, we’ll be sure to have a blast.

To the Chezem administration: I urge you to seriously consider these propositions. You were elected to enact the people’s will and the people want ball pits, chocolate, Coca-Cola, geese and Martha Stewart.