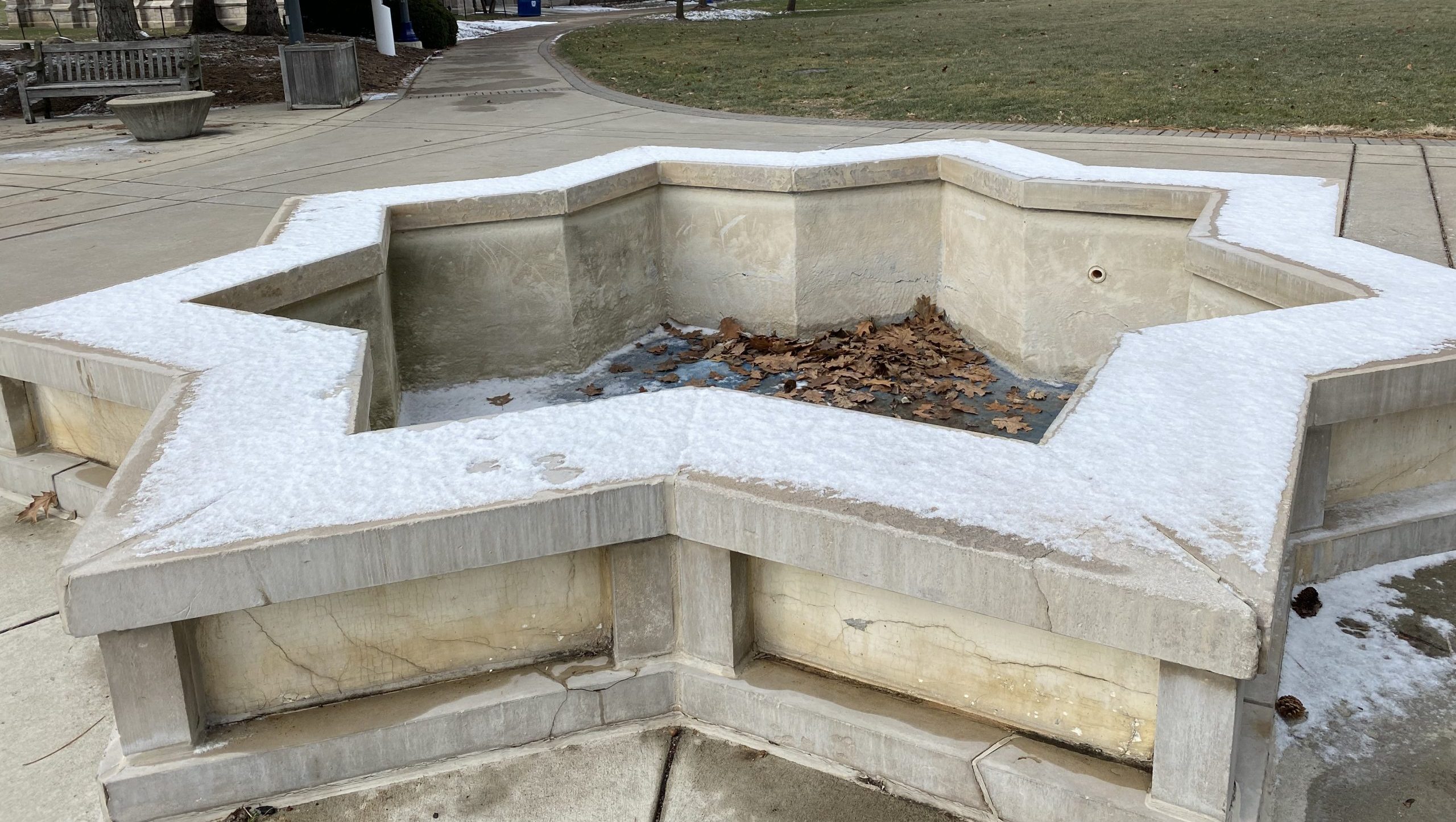 Filling Star Fountain is direly needed to restore our campus to its former beauty. Photo by Claire Runkel.

Due to the cold weather, Star Fountain has been empty for several months now. It remains a gaping, gross, gray blemish on our otherwise beautiful campus.

In order to remedy this dire situation and restore our beloved Star Fountain to its former glory, I have composed a short list of various liquids, objects and people that could fill the fountain.

Everyone loves soup. Personally, I love a good chicken noodle soup, but I won’t turn down a delicious lemon rice soup or a hearty potato soup. There’s a soup for every occasion and therefore it provides a very viable solution to our Star Fountain problem.

Abraham Rittenhouse, a junior instrumental music education major, said that Butler should fill Star Fountain with soup because of its versatility.

“It can be chunky, it can be soupy, it can be broccoli and cheese, it can be alphabet soup,” Rittenhouse said. “Soup can be all of those, and more. And that is why I truly believe that soup in Star fountain wholly represents our motto: BU Be Well.”

Instead of the strange and often rancid smells wafting from Atherton Union, Butler University’s mall could smell of scrumptious soup.

Gab Peabody, a sophomore art and design and strategic communication double major, claims that Butler should look to the past for the soup we put in the fountain.

“I would put … medieval soup [in the fountain],” Peabody said. “They would put their leftover food waste in the soup in a cauldron, and it would roast all day so they wouldn’t waste anything and you’d have soup forever.”

The prospect of eternal soup is definitely appealing and it’s even better when you consider the environmental benefit of reusing food waste. If Butler wants to be a more ecologically friendly campus, we should definitely consider implementing a communal soup fountain.

Gallium is a chemical element that is solid at room temperature but turns to liquid when it is heated slightly.

To be completely honest, when I first heard of gallium I had no idea what it was; I’m not a chemistry major. However, I did watch several videos of people playing with liquid gallium and was thoroughly entertained.

Peabody feels that liquid gallium would be a great option to fill Star Fountain with.

“Gallium … would be so cool,” Peabody said. “[Star Fountain] would be like a robot fountain.”

The idea of a robot fountain is definitely appealing and gallium is mostly non-toxic, as opposed to other metals that melt at low temperatures like mercury. Of course, the gallium would have to be heated to remain in liquid form, but that little issue could be solved with a couple of space heaters. Gallium in Star Fountain would provide our campus with a futuristic feel and could be a good way for Butler to further engage with the sciences.

Milk is definitely a controversial beverage. Generally, I am not a big milk enjoyer but I do love an occasional glass of milk with a warm snickerdoodle or chocolate chip cookie.

“[We could have a] communal milk pool [where] people can come up, kneel down, get a straw and just drink in the fountain,” Moore said. “They can stay hydrated and they can make their bones strong whenever they want.”

It is recommended that adults consume three cups of milk per day to get important nutrients like calcium and vitamin D. A communal milk pool would allow Butler students to get the nutrients they need and overall improve our campus health.

Furthermore, Moore feels that filling the fountain with milk makes a necessary statement to our community.

“There’s a thin white line separating us as a society from chaos and that white line is milk,” Moore said. “I’ve seen a lot of people on this campus just doggin’ on milk recently, [and on] us milk drinkers … Everyone needs that monument in the middle to remember that we are the few and the brave.”

While I am not myself an avid milk drinker, I would consider myself an ally to the community. If it is important to the lactose lovers of this campus to fill Star Fountain with milk, I think we should indulge them.

Orbeez are colorful, squishy spheres of joy that would provide a much needed splash of color to Star Fountain. Right now the fountain is objectively crusty and gross, and I am tired of having my eyes assaulted by it on my daily walks to class.

“It would be fun to put your feet in it,” Peabody said. “I’m worried about how it would be after a few days, but for a day, that would be punk.”

The winter months can be especially hard on college students. If the university wants to support student’s mental health, filling Star Fountain with Orbeez would brighten up campus and could even provide a nice place to relax.

I know this might sound a little ridiculous, but bear with me for a moment. I’m not saying that we should put the entire men’s basketball team in the fountain, but I think if we put five or six of them in there at the same time, they could be shown to tour groups to encourage students to come to Butler.

Moore feels that just putting the men’s basketball team in the fountain would be insufficient.

“[They could be put in the fountain] only if they’re drenched in milk,” Moore said.

In a perfect world, all the fountains on campus would be drained of water and filled with soup, gallium, milk, Orbeez, basketball players or some combination of these. Unfortunately, we don’t live in that perfect world, but we can get one step closer to it by filling up that fountain.