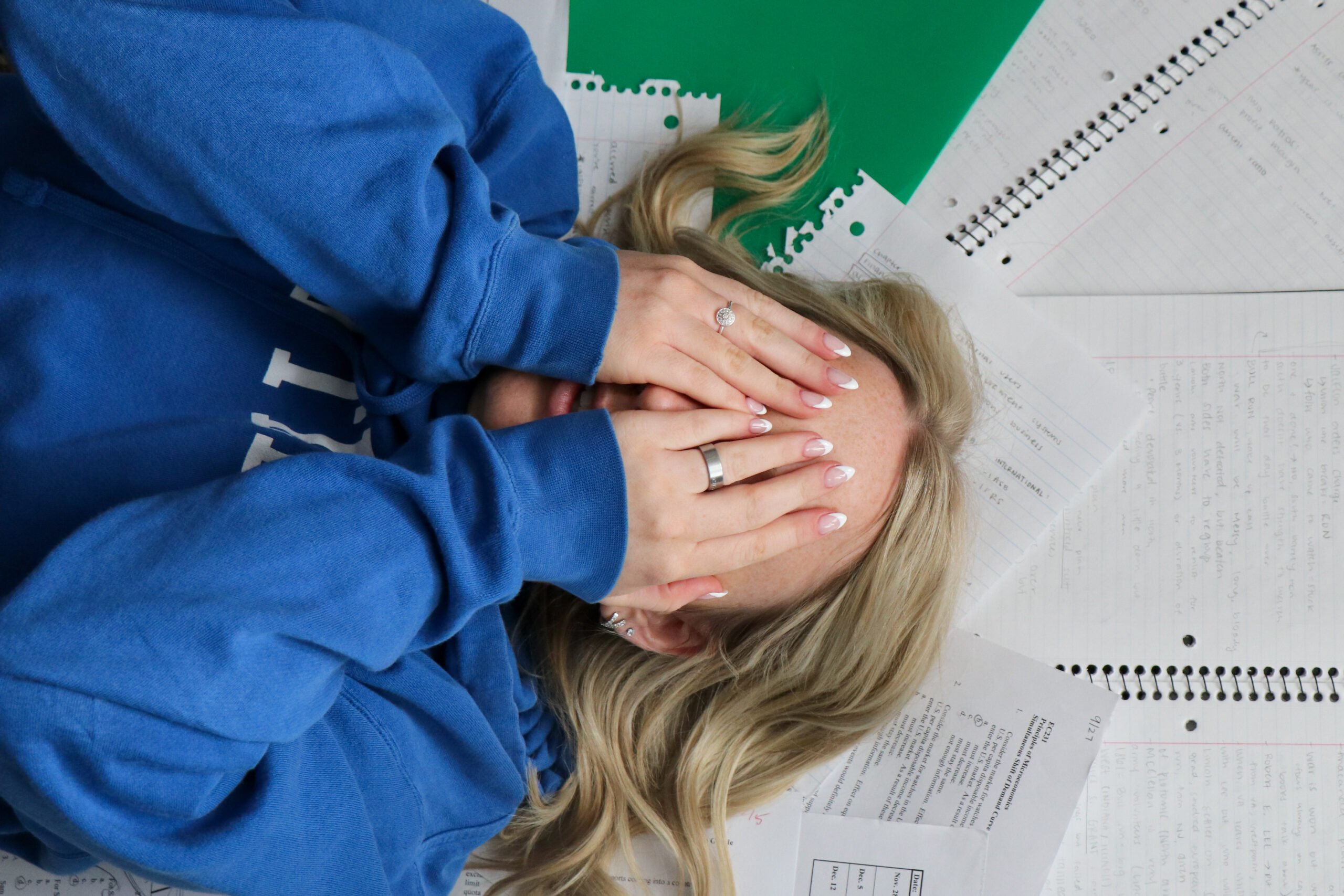 Overwork and underappreciation are sure to lead to chronic exhaustion. Photo by Grace Hensley.

I’m exhausted. Between three jobs, a full course load, a thesis and attempting to maintain a social life, I am in dire need of a break. But alas, the grind stops for no man.

I know I’m not the only one that feels this miserable; it seems like my classmates, friends and even professors are struggling to get by. Since the COVID-19 pandemic began, things as simple as reading a few chapters of a book or studying for 30 minutes have felt onerous and exhausting. As midterm season bears down upon us, and the daily to-do list grows ever longer, just getting through the day feels impossible.

So what is this awful feeling that seems to plague our campus? Good old-fashioned, all-American, soul-sucking burnout.

Keith Magnus, the director of Counseling and Consultation services at Butler, defines burnout as unique from everyday stress and tiredness.

“[Burnout is] not just a stressful day or week, but more of a long-term being unable to do what you usually do because you’re feeling worn down, worn out, over it, irritable [and] impatient,” Magnus said. “It’s more long-term. Usually, the causes are more long term as well.”

Everybody has days where they feel exhausted, but when you are pushed to your limit every day for months or years on end, the grind begins to feel like a Sisyphean task. Your mind and body don’t have time to rest and catch up for so long that taking a tumble down the Jordan Hall stairs sounds preferable to writing another paper.

Natalie Long, a senior history and anthropology major, is one such student that has worked too hard for too long and is beginning to feel the effects of burnout.

While it is somewhat comforting to know that I’m not the only one on this campus who is fighting burnout demons, the knowledge that I have five more semesters to trudge through is rather daunting. The knowledge that I will continue to drown in work for the remainder of my academic career makes it feel futile to keep going.

Magnus explained that it’s not just overworking that causes someone to experience burnout.

“If you’re in a job or situation [or] school where you don’t feel like you have much say or control in your life or autonomy, that’s one ingredient [for burnout],” Magnus said. “People also like to feel valued. If they’re in a job that they feel undervalued or devalued, that can usually contribute … the third big strand is when people don’t feel a sense of connection to what they’re doing.”

As a humanities major, if you’ve ever seen the interior of Jordan Hall, you know exactly how much Butler values its liberal arts students. Despite being a liberal arts university, the liberal arts are chronically underfunded and the achievements of students in business or the hard sciences tend to overshadow those of students in other areas of study. When you don’t feel like your hard work is appreciated, the work feels even more arduous, and you’re likely in for a serious case of burnout.

Of course, part of the conundrum is that although many in academia, including professors, deal with burnout, it doesn’t look the same for everyone. Julie Searcy, an assistant professor of anthropology, has experienced burnout and explained what it looks like for her.

“When I’m feeling burned out, I tend to avoid,” Searcy said. “I don’t respond to emails; I don’t pick up the phone. You can look at my text messages, and there will be like 50 because I haven’t responded …  I avoid stuff, and then I just dig myself deeper and deeper.”

Magnus feels that although the symptoms of burnout may be different from one person to the next, the causes are all but individualized.

“Systemically, we’re a culture of ‘go, go, go, work, work, work,’” Magnus said. “It’s not [as simple as], ‘You can’t hack it because … [individually] you need to either buck up, or you need to get some stress management tools,’ … it’s a cultural and systemic issue.”

This burnout isn’t an issue of an individual’s poor time management skills or procrastination. I’m a proactive student, but when the work piles up faster than it gets done, it begins to feel pointless to keep working. Rather than blame individuals for struggling with an impossible workload, we should reconsider why we as a society think that working to the point of exhaustion is admirable.

Searcy concurs with Magnus and adds that performing invisible labor — generally unpaid tasks like cooking, cleaning or anything else that sustains daily life — often goes unrecognized, which can further lead to burnout.

“Our culture values productivity and efficiency above all else,” Searcy said. “Institutions operate on the same values and system and assumptions. So there’s an assumption that productivity and efficiency are the best and the highest values, and that [invisible labor] has to happen, or things can’t go on — but institutions don’t make them visible, so people don’t get credit for them.”

This is fundamentally a capitalist cultural issue. Our society emphasizes the importance of pulling yourself up by the bootstraps and working hard. Invisible labor — disproportionately performed by women and people of color — goes ignored because our capitalist system doesn’t value it. When it seems like the work never ends and no one even cares that you’re doing it, burnout is the natural response.

Searcy has made attempts in the classroom to fix some of the systemic issues that lead to burnout.

“Structurally, what I try to do in my classes is not have fixed deadlines,” Searcy said. “I do have deadlines, but I will accept late work. I understand that things happen, and there isn’t going to be punishment for you if you need to turn in something late.”

Classroom policies like this are extremely helpful in alleviating burnout for students, but broader institutional change is necessary. As long as labor is our society’s primary value, burnout will be an unavoidable consequence. Policies like Searcy’s that emphasize the importance of slowing down the hustle should be universal. We’re all in this together, and the only way to get out of it is to change our culture — before the flame goes out completely.