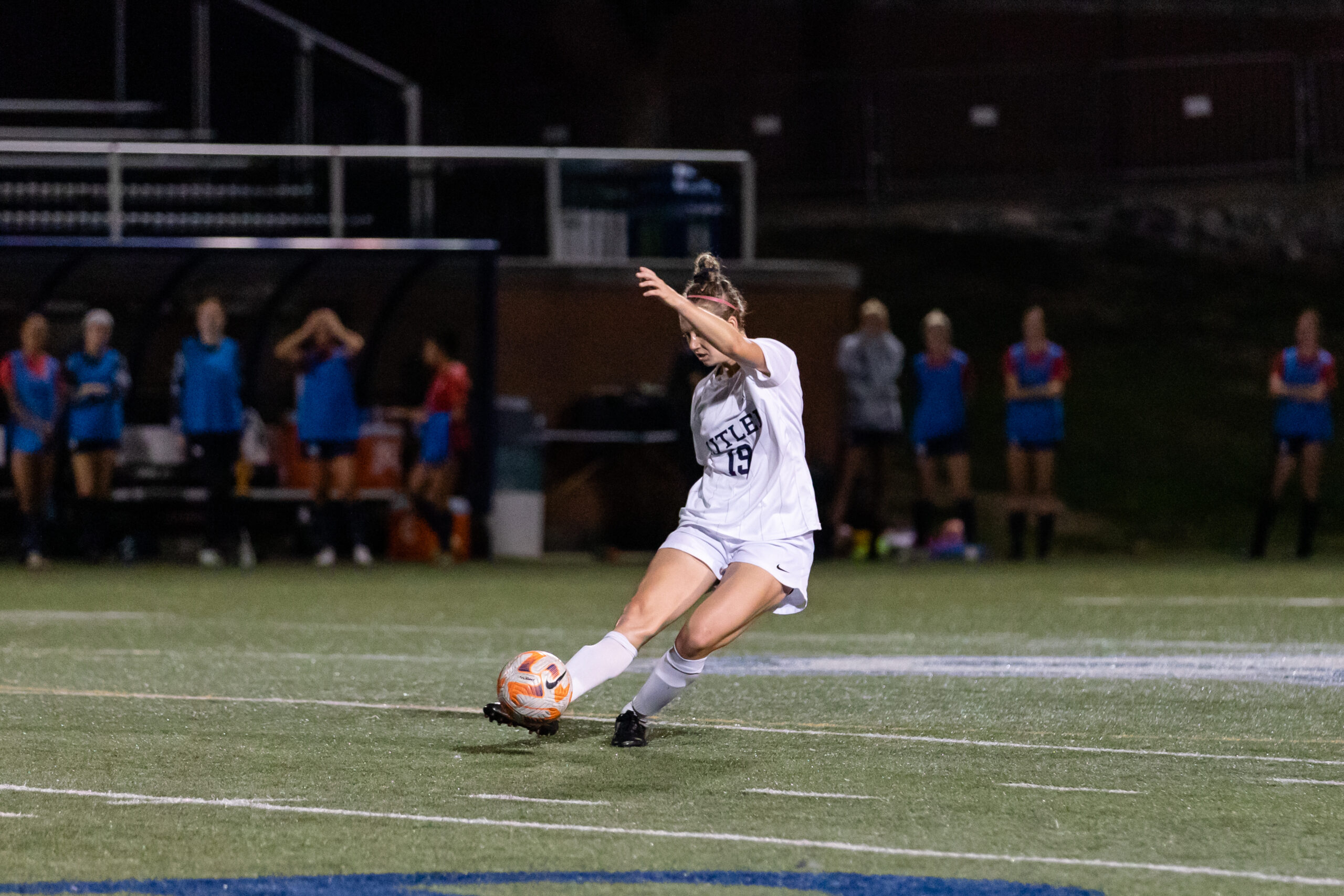 Caitlin O’Malley kicks the ball in Butler’s game against Dayton on Sept. 8. Photo by Lauren Hough.

Butler bounced back after their winless streak against Ohio State, Indiana and DePaul by dominating in their game against Lindenwood. The Bulldogs beat the Lions 9-0 in a game that featured three players scoring multiple goals. First-year forward Palmer Ault, sophomore forward Nick Okoro and junior forward Kyle Hagerman each scored twice. Okoro and Hagerman’s two goals were the first of their Butler careers. Fifth-year midfielder Rico Hollenkamp, redshirt junior defender DJ Hooks and junior midfielder Nick Graziano also added in goals of their own.

The women’s soccer team fell in the Big East opener to Xavier 1-0. The Musketeers scored in the 22nd minute to take their one and only lead of the game. The loss continues the Bulldogs’ five-game skid.

Butler women’s volleyball opened their Big East schedule with a 3-1 win over DePaul. The Bulldogs won the first two sets in tight fashion, with a score of 25-23 in the first set and 25-22 in the second set. They dropped the third set 19-25, but rallied to win the fourth set 25-20. Sophomore Amina Shackelford led Butler with 22 kills.

First-year Chase Metcalf and sophomore Emma Beavin each won their first singles match, but both fell in the semifinals round. Metcalf and junior Veronika Bruetting won a match in doubles play. The team will have two weeks off before they travel to Dallas, Texas on Oct. 14 for the SMU Invitational.

The men’s soccer team built off their blowout win against Lindenwood with a 4-1 win over UConn. The win is the first of Big East play for the Bulldogs. Ault picked up his second straight two-goal game and was named to the national team of the week. The team will travel to Milwaukee, Wis. on Sept. 30 to face Marquette.

The women’s volleyball team fell to No. 19 Marquette in four sets. After losing the first set, the Bulldogs won the second set 25-22 — the Golden Eagles would take the next two sets to win the match. Senior Megan Sheridan and sophomore Mariah Grunze tied for the Butler lead with 11 kills each. The team will look to get back into the win column with a matchup on against No. 21 Creighton in Omaha, Neb. on Sept. 30.

First-year Aidan William went 3-0 in his singles matches and was selected to the All-Tournament team. Seniors Zach Trimpe and Michael Karr each went 2-1 in their singles matches over the weekend to round out singles play. The Bulldogs will next travel to the Ball State Invitational on Oct. 7.

Butler women’s soccer fell to Marquette 4-1 in their second Big East game of the season. First-year midfielder Talia Sommer scored in the fifth minute of the game to give the Bulldogs a 1-0 lead, but Marquette responded with four straight goals to finish the game. The Bulldogs will look to get their first Big East win on Sept. 29 at Providence.

Following day one of play, Butler sits in seventh place at the Zach Johnson Invitational. Freshman Will Horne and sophomore Henry Quinn both sit at one over par. The total for the Bulldogs is at 29 over par, for a score of 597.

Following the final day of play at the Zach Johnson Invitational, Butler finished the event 44 over par for a score of 896 and came in seventh place out of 14 teams. Sophomore Damon Dickey led the Bulldogs in day two, shooting just one over par. The next event for the Bulldogs will be the Tom Tontimonia Invitational in Westlake, Ohio held on Oct. 3 and Oct. 4.