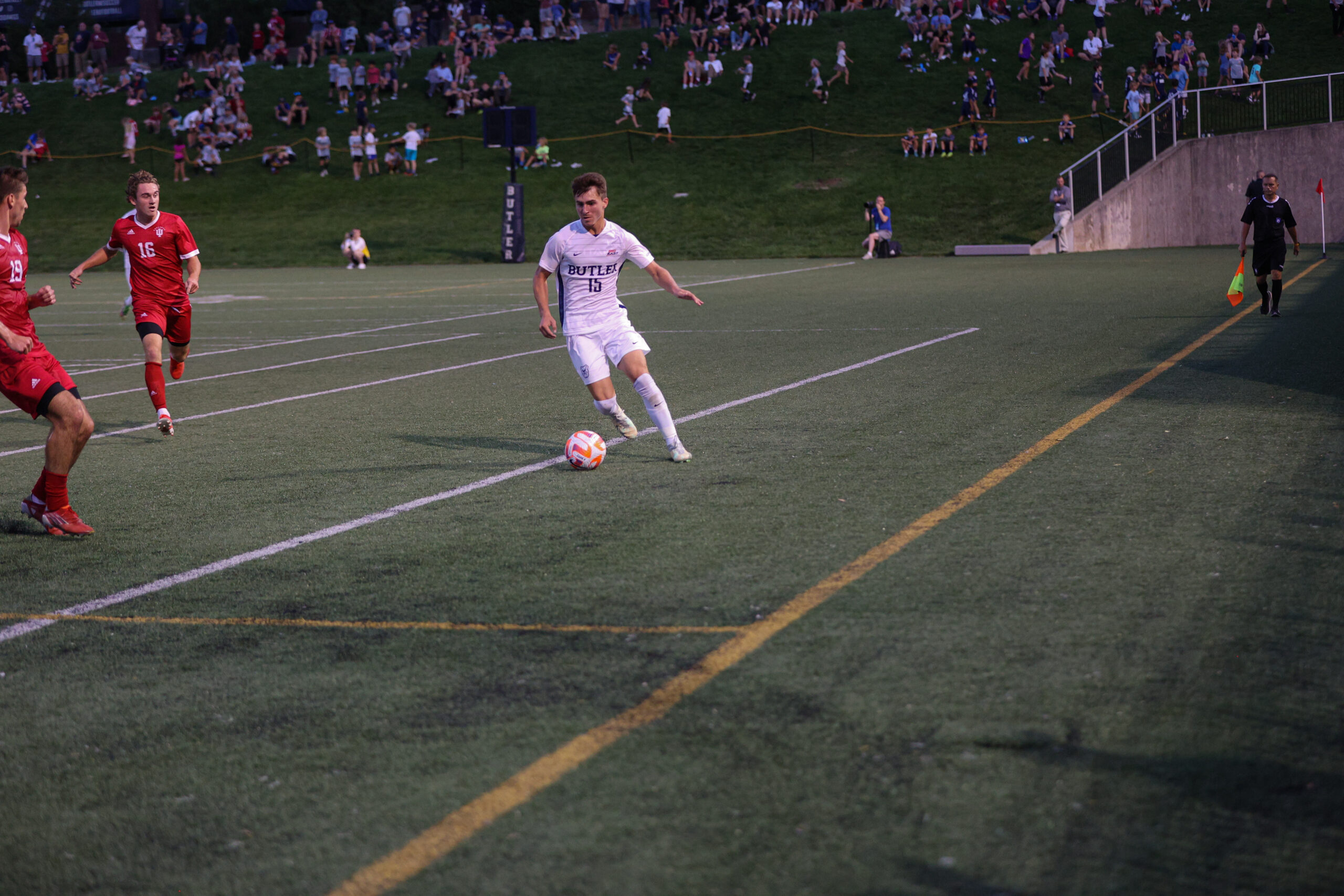 Butler first-year forward Palmer Ault dribbles the ball in the game against Indiana on Sept. 14. Photo by Claire Runkel.

The Butler men’s soccer team defeated Lindenwood 9-0 at the Bud and Jackie Sellick Bowl on Wednesday night. The Bulldogs move to 4-2-1 on the season after the win over the Lions. Butler handed Lindenwood their fourth loss in their first year as a Division I team.

Butler got off to a fast start, maintaining possession of the ball and setting the tone for the rest of the game. First-year forward Palmer Ault started the scoring off in the 11th minute with a missile into the back of the net.

Butler’s defense quickly became a problem for Lindenwood as the Lions were swarmed and were unable to do much of anything on offense. Goals started to come rapidly for the Bulldogs before the end of the half.

In the 22nd minute, Ault once again found the back of the net off an assist from fifth-year midfielder Rico Hollenkamp.

Ault continued wreaking havoc as he found redshirt junior defender DJ Hooks for a goal in the 27th minute to push the lead to 3-0. Less than two minutes later the Bulldogs struck again as the Lions found themselves too high up the field. This time, it was Hollenkamp in the 29th minute with the assist credited to Ault.

After their fourth goal allowed, the Lions briefly settled in on defense and were able to prevent any further goals until a physical play in the box led to a Bulldog penalty kick attempt. Junior midfielder Nick Graziano was able to convert the penalty to stretch the lead to 5-0 at the 38th minute mark.

Lindenwood sophomore defender Cole Hutson picked up the only yellow card of the night in the 44th minute. The Bulldogs took their lead into the half after putting up 15 shots and holding the Lions to only two shots.

Right out of the half, Butler sophomore forward Nick Okoro scored in the 59th minute off an assist from senior forward Wilmer Cabrera Jr and Hollenkamp.

The Lions continued their theme of fleeting defense until Okoro scored again, this time in the 70th minute with the assist by Graziano.

The Bulldogs were relentless in their quest for goals as they kept pushing forward with their attack, leading to a goal in the 76th minute by junior forward Kyle Hagerman that buoyed the lead to 8-0.

Mercifully, Hagerman scored the final goal of the night in the 82nd minute to finish off the Lions.

The Bulldogs’ dominance on defense kept the Lions to five shots on the night, none of which were much of a challenge for the keeper. In comparison, the Bulldogs had 14 shots on goal and seemed to always be in the offensive half of the field.

Ault, Okoro and Hagerman each had two goals in the game — accounting for the majority of the goals scored.

This was Butler’s first matchup against Lindenwood in program history.

The Bulldog’s next game will be against UConn as they travel to Storrs, Conn. to play their second game of conference play on Sept. 24.