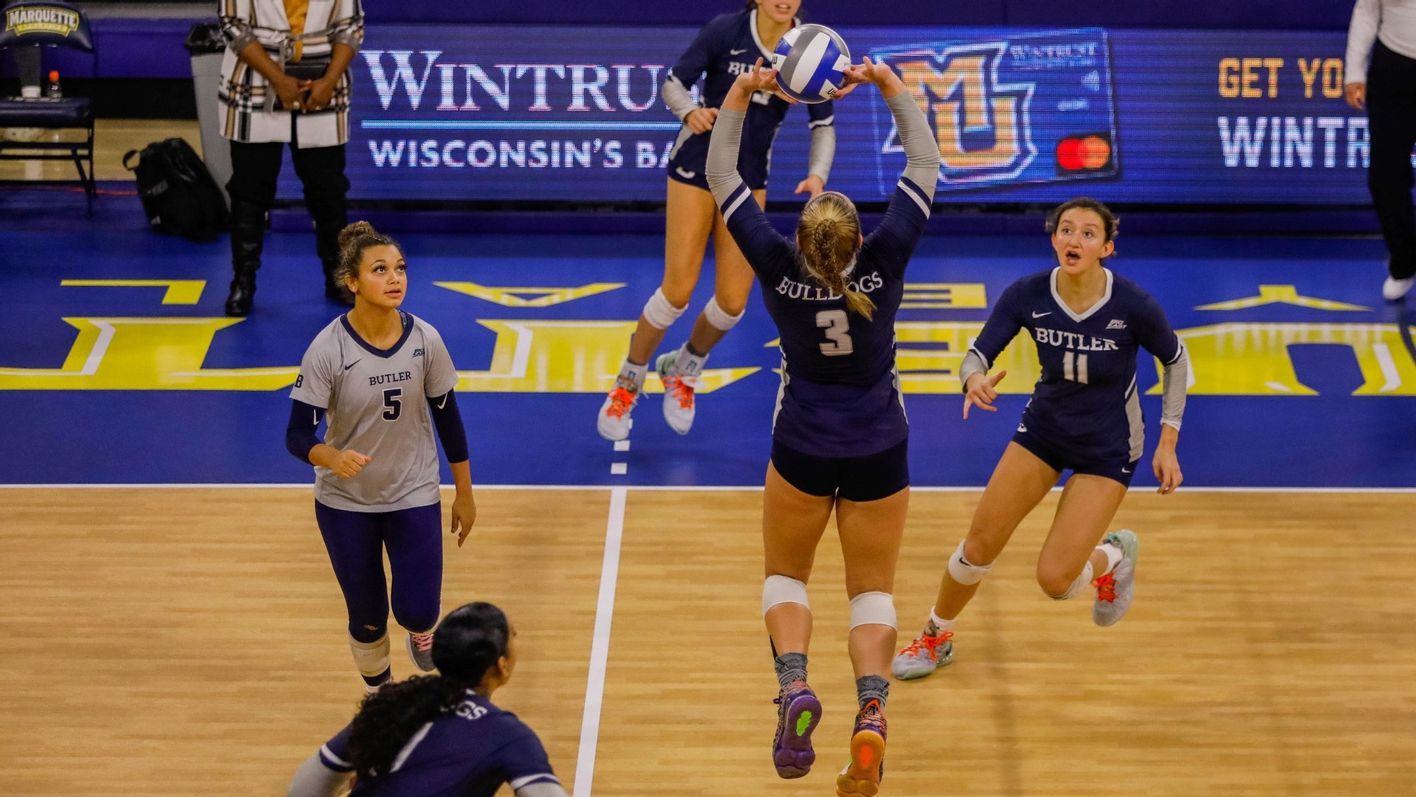 The women’s volleyball team started the Big East 1-1 with games against DePaul and Marquette this weekend.

On Friday, Sept. 23, the Bulldogs defeated DePaul on the road in four sets.

After trailing 15-11 in the opening set, two kills from junior Amina Shackelford sparked a 7-1 Bulldog run to pull ahead 18-16. The lead did not last long as the Blue Demons and Bulldogs traded points resulting in a late-set 20-20 tie. DePaul errors and Shackelford kills propelled the Bulldogs to 25-23 first set victory.

Throughout the entirety of the second set, the two teams went back and forth until a 17-17 tie. Back-to-back kills by freshman Cora Taylor and sophomore Grace Boggess and a Boggess and sophomore Mariah Grunze block allowed the Bulldogs to rack up three straight points, 20-17. Butler’s next five points all came off of kills putting them in an early 2-0 set lead. The Bulldogs won 25-22.

Butler took an early 2-0 lead in the third set, but DePaul went on a 9-0 run putting the bulldogs in a 2-9 hole. The Bulldogs tried to come back late from a two point deficit at 19-21, but it wasn’t enough to counter DePaul’s offense. Despite their efforts, the Blue Demons took the set 19-25.

The fourth set was neck-and-neck with nine total lead changes with the highest at 19-19. A kill from Grunze and DePaul error would put Butler up 21-19 until a kill from DePaul’s Taylor Underwood pulled the set within one at 21-20. The Bulldogs were able to play off the pressure and take the next four points on three kills and one ace, closing out the match 25-20.

On Saturday, Sept. 24, the Bulldogs fell short of an upset against No. 19 Marquette.

In the opening set, The Golden Eagles’ offense helped propel them to an early 1-0 match lead. After an early 4-4 tie, Marqueete went on a 6-17 resulting in a Butler deficit of 10-21. Two Golden Eagle kills and two Bulldog errors allowed Marquette to take the set 12-25. Junior Megan Sheridan led Butler with four kills in the set.

Despite a slow start, the Bulldogs continued to fight and led the majority of the second set. Butler’s biggest lead came at 13-9 with a kill from Taylor. However, Marquette– needing to prove their ranking– didn’t go away and rattled off four straight points to force a 13-13 tie. From there, Butler and Marquette started trading points and runs until it was 23-22, Butler. With kills from Shackelford and Sheridan, the Bulldogs were able to even the match 1-1. Grunze and Shackelford combined for 10 out of the 16 Bulldog kills.

Butler was not able to carry the momentum into the third set and dropped it 8-25. Marquette started the set with a 6-0 run and never looked back. The closest Butler got was within five at 3-8 off of a Shackelford kill. The Golden Eagles outscored the Bulldogs 16-5 in kills.

The fourth set followed the same competitiveness of the second with the teams going on runs and trading points. The Bulldogs trailed the entire set until a 6-0 run would give them a four-point cushion at 17-13. However, Marquette stormed back and took the next seven points off of four kills and three Butler errors, pushing them closer to a match win at 17-20. The Golden Eagles would close out the match on a 5-2 run resulting in a final score of 19-25. Butler scored 11 of their 19 points on kills.

The Bulldogs will look to get back in the win column on Friday, Sept. 30 against No. 22 Creighton in Omaha with first serve scheduled for 7:30 p.m. ET.