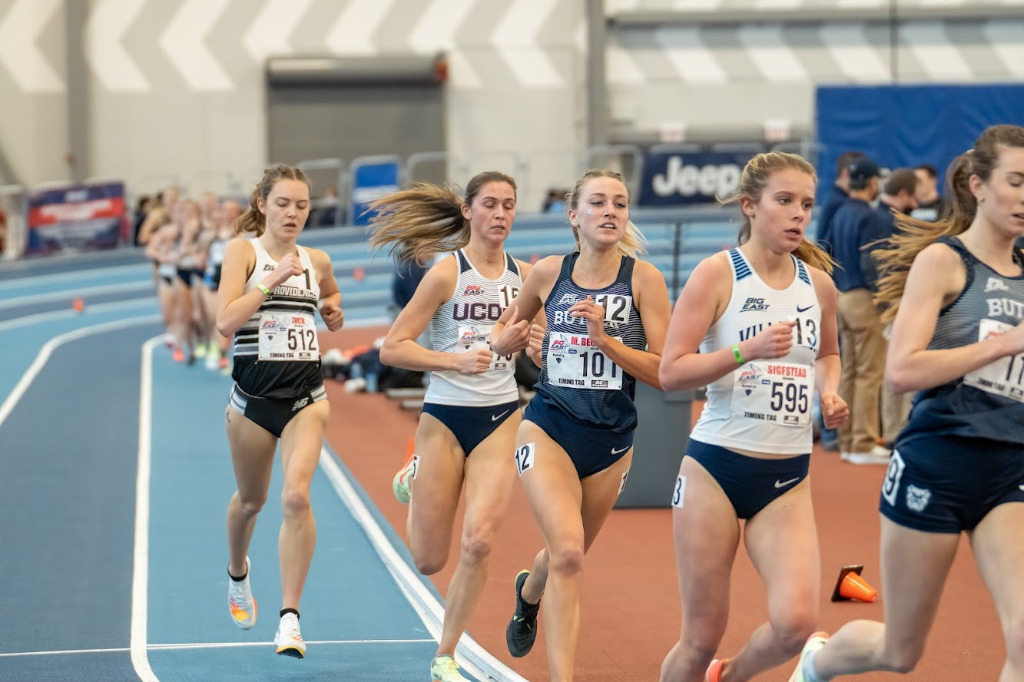 Senior Mia Beckham on her way to a personal best run in the 3000 meter race at the Big East Indoor Championships on Feb. 25, 2022. Photo courtesy of Butler Athletics.

With the outdoor track and field season underway, the Butler men’s and women’s teams are hoping to build on a successful, record-breaking indoor season.

Most of Butler’s top runners finished their indoor season at the Big East Indoor Championships on Feb. 25-26 and started their outdoor season a month later at the Raleigh Relays on March 24-26.

Following the indoor season’s conclusion, the Bulldogs had to quickly shift gears and focus on their first outdoor meets of the season. Head coach Matt Roe emphasized the difficulty of the transition from the indoor season to the outdoor season.

“You never know completely in that first meet what you’re going to get in terms of weather or performance because you’re coming off of indoor,” Roe said. “Some of that time training is on your own, because spring break is in between that.”

Due to the uncertainty of weather and the wrench that spring break throws in training, student-athletes have to adjust rapidly to the season change.

Senior Mia Beckham ended the indoor season with a personal best run in the 3000 meter race at the Big East Indoor Championships. Beckham noted the differences between training for the indoor season compared to the outdoor season, as she doesn’t get on the indoor track as much because her workouts are typically longer and more suitable for the outdoor track.

Beckham also went on to explain that staying off the indoor track minimizes the risk of injury, especially for long-distance runners who have been building up more mileage in practice.

When the Bulldogs started their outdoor season, they posted a plethora of personal bests in Raleigh. Butler’s developmental squad — athletes in need of more competition experience — also recorded solid results at the Blizzard Buster in Miami, Ohio and the Redbird Invitational in Normal, Illinois.

Roe was impressed and excited by his team’s performance at their first few meets.

“I’m very pleased with how we transitioned from indoor to [outdoor] and the training that everyone did [with] some of them being away from campus,” Roe said. “The commitment level to compete and train at a high level in that transition has been really good and the results have shown that.”

According to Roe, the team has been facing off against programs with larger coaching staffs and more scholarships available throughout their first few meets — creating an ‘underdog’ status for Butler.

“We play that [status] to our advantage when it makes sense, but if anything, we’re just trying to maximize our potential,” Roe said. “I think that gives us a lot of motivation going into competitions.”

Not only will the underdog role help the Bulldogs continue to improve, but the team has also been working hard to strengthen their mindset for competition. In order to build on the early season success, Beckham emphasized the goal of maintaining a strong mentality throughout the entirety of the season.

“Something I really try to work on … is emphasizing the word ‘focus’ during workouts and during races,” Beckham said. “I think the goal is just honing in on that focus and emphasizing that in my training.”

While Beckham and her fellow teammates focus on the mental aspect of the outdoor slate, Roe has more statistical goals for the season. Roe believes that both the men’s and women’s teams are capable of performing at a higher level than last season.

After a successful start to the outdoor season, the Bulldogs will head next to Champaign, Illinois for the Illini Classic on April 8-9.