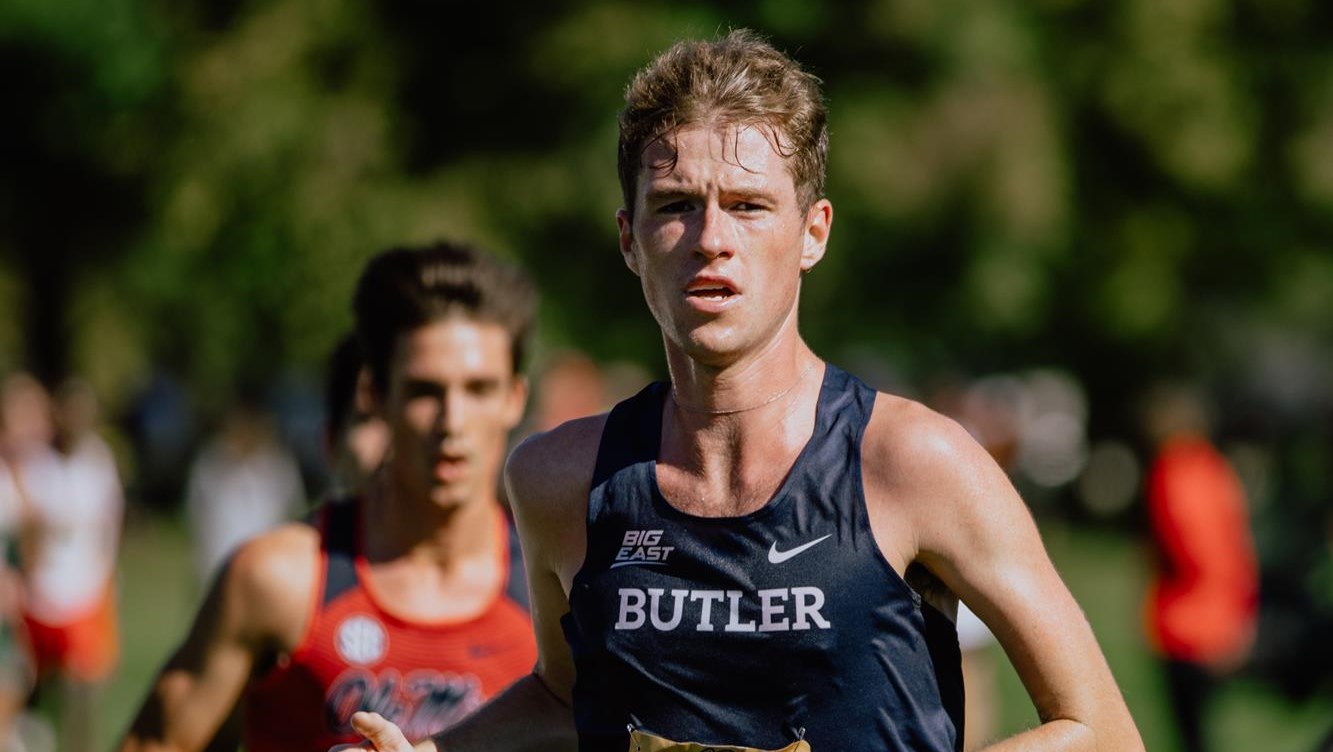 Redshirt senior Barry Keane running in a race during the 2021 cross country season. Keane holds the national record in Ireland for the 5k race with a time of 13:25.96. Photo courtesy of Butler Athletics.

During his years at Butler University as a cross country and track and field star, redshirt senior Barry Keane has racked up quite the trophy case. From qualifying for the NCAA Cross Country and Track Championships to setting a national record in Ireland, Keane has solidified himself as one of the greatest runners to ever wear navy blue and white.

However, his accomplishments didn’t come without trials and tribulations, as he had to battle through thick and thin to help put the Butler running program on the map.

When it came to running, Keane was very late to the sport. Keane grew up in Waterford, Ireland in a Gaelic Games — a range of indigenous Irish sports and pastimes deeply embedded in Irish culture — centric family. He would play Gaelic football and hurling for years with dreams of competing at the highest level.

His training for those sports often involved a lot of running, which he would be doing most of the week. All the hard work led to Keane becoming pretty fast at a young age. Seeing this, Keane’s mother suggested he should try out for cross country.

“My mom was a bit of a fitness freak,” Keane said. “She would run half marathons and adventure races, so she was the first person to really introduce me to the sport.”

The next day Keane was sitting in his math class when he asked his teacher — who was also the cross country coach — if he could try out for the team. His teacher responded by telling him that he was too young and a bit of a mess to bring him with. However, Keane was not ready to take no for an answer.

“I genuinely wanted to run, so I kept pestering him until he gave in and let me race,” Keane said. “I was wearing old running shoes, a long sleeve t-shirt and soccer shorts, but to my surprise, I ended up finishing in second.”

Keane’s passion for running began to take off from there as he finally found a sport he was interested in.

He would eventually work his way up to racing nationally after earning a spot on the Irish national team. Keane was forced to step away from playing the Gaelic games and move on to running full time.

After he graduated high school, Keane ended up taking a year off of school to focus on running. He had aspirations to leave his country to compete abroad.

“My ultimate goal was to go to America to run in college,” Keane said. “I remember spamming a bunch of emails to any coach or university I can think of that had international people on their roster and hoping one would stick.”

One of those emails he sent happened to be to Butler’s head coach Matt Roe. Roe remembers the first time Keane reached out to him about running at Butler.

“He reached out to us after he ran at the Europeans cross country championships,” Roe said. “He was flying under the radar because his times were not fast enough to make it to the States, at least in the capacity that he wanted, but I knew we had to keep an eye on him.”

After much consideration, Roe eventually offered Keane a scholarship to come run for Butler. While his times were not earth-shattering, Roe still believed he was worth taking a chance on  and made a gamble on Keane — a bet which would pay off big-time.

“We took a little bit of a gamble,” Roe said. “We speculated that he had the potential to succeed, but we could’ve never predicted how great he would turn out.”

After evaluating a few competing offers, Keane eventually made the decision to become a Bulldog and join the program in 2017. While he was excited about coming to race on the other side of the Atlantic Ocean, he was also a little worried since this was his first time stepping foot in America. However, Keane said his teammates and coaches helped him settle in.

“The first night I got off the plane, some of the guys were already inviting me over to play some card games with them,” Keane said. “Immediately, I was thrown into how the team and coaches operate, but they were all super welcoming.”

With Keane’s arrival on campus, he began to make an immediate impact from day one. Roe noticed how devoted Keane was to improving his skillset right away.

“He was always committed to his development,” Roe said. “We came up with a comprehensive plan to attack his weaknesses by simultaneously accentuating his strengths, building his running volume and getting him stronger. Keane stuck with it and has continued to mold himself into an elite runner.”

In his first season in cross country with the team, Keane placed fifth in the 8K at the Big East Conference meet with a time of 24:52.5. One week later, Keane continued his tear at the NCAA Division I Great Lakes Regional, placing 12th in the 10K at 31:19.5. His top finishes earned himself All-Big East First Team and USTFCCCA All-Region honors.

The following year, Keane saw a minor dip in his production. While he was named to the All-Big East honors for the second consecutive year, he finished 30 seconds slower than he did just one season prior at the Big East Conference Championships. It was a similar story at the regional where he placed 30 spots behind last year’s race.

For the 2019 season, Keane felt he needed a year off from competing, so he chose to redshirt his fall cross country season. During his time away, Butler recruited another elite talent originally from Europe named Simon Bedard.

Bedard, a French transfer from California Baptist, arrived in Indianapolis in hopes of finally reaching the NCAA Championships. Once he arrived on campus, he joined Keane to create some competition at the top of the pack. Bedard admired his running relationship with Keane.

“I could not have found a better running partner than Barry,” Bedard said. “We are not the same type of runner. He’s more of the stronger guy while I’m more of the speed guy, but together, our skill sets are very complimentary of each other.”

Keane also showed his appreciation for Bedard and how much he’s shaped him into who he is today.

“I don’t think I’d be as good as I am now without Simon pushing me in workouts,” Keane said.  “Our relationship has always been a competitive one. We each want to beat each other, but we each wanna see each other succeed too.”

The new dynamic duo first put their skills on display during the 2021 spring cross country season, which was pushed back from the fall due to the COVID-19 pandemic in 2021. Keane and Bedard would help lead the team to their first Big East Conference title in the program’s history after placing second and third overall. Their big performances helped the team secure their first bid to the NCAA Championship in cross country since 2009.

The next weekend, Bedard led the way at the national meet finishing in 37th at 30:44:5 with Keane not too far behind in 43rd at 30:50.4. Their performances were two of the highest in their program’s history.

In the fall, they would help the team qualify for the national meet again. Unfortunately, this race went a lot different. Bedard woke up the morning of the race with a severe cough, so he didn’t run the time he wanted.

Keane faced similar adversity at the end of the race. In the last thousand meters, Keane lost 50 spots after pulling a diaphragm.

“It was a really ugly situation,” Roe said. “He went from running unbelievably well and moving through the field to essentially jogging it in.”

After a sour end to such a bright season, Keane set out to redeem himself during the indoor track and field season.

Two weeks after competing at the national meet, Keane and Bedard were invited to run a 5K at the Sharon Colyear-Danville Season Opener in Boston, Massachusetts on Feb. 11. Keane headed into the race with no expectations.

“I had come off that cross country season in the fall kind of deflated,” Keane said. “I went into this race not being nervous or not really caring about a certain time or outcome.”

Keane crossed the line in first place with a time of 13:25.96 which broke not only the Butler school record, but also Ireland’s national indoor record. He was shocked when he realized how fast he had run.

“I ran out of my skin,” Keane said. “That ended up being one of the best races I have ever raced here at Butler.”

Roe believed Keane looked unstoppable when he was watching him run in Boston.

“It was very apparent that day that he was not going to let anything get in his way,” Roe said. “He just had a special level of conviction and intensity in the way that he raced at Boston. You could just tell he was a man on a mission.”

This time was also good enough to help him qualify for the NCAA Indoor Track and Field Championships. Keane was excited to represent Butler in another national meet.

“I always had an inkling that I would make it there, but to actually see it on paper was a bit surreal,” Keane said. “You don’t see a lot of mid-major schools at the national indoor or cross country meets, so it felt cool to help put Butler on the map.”

When Keane arrived in Birmingham, Alabama, he was ready to race. He finished 11th in the 5K with a field of 16 runners at 13:35.01 earning a Second Team All-America distinction.

With the arrival of the outdoor track and field season, Keane’s collegiate career will soon be coming to an end as his eligibility is running out. Keane has aspirations to compete outside of college in professional races.

“I’d love to keep running after college,” Keane said. “My main goal is to run professionally, so I’m going to continue training until I can compete in as many national competitions as I can.”

For the time being, Keane is focused on the task at hand of returning to the NCAA National Championships one last time before the sun sets on his historic career at Butler.

Keane’s next race will be at Raleigh Relays on March 25 in Raleigh, North Carolina. However, his eyes remained locked on the Big East Outdoor Championships which begin on May 13 in Storrs, Connecticut.