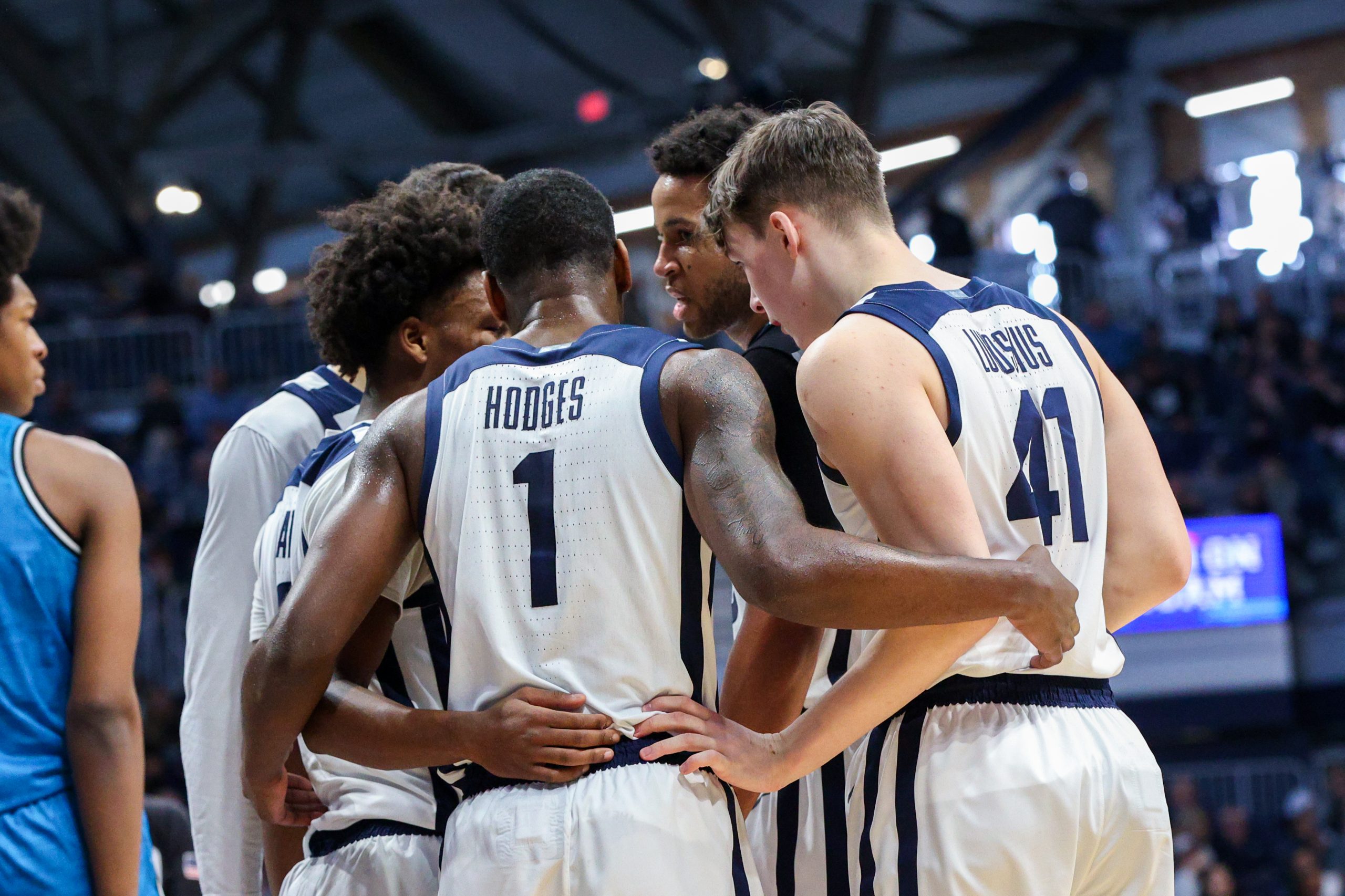 The Butler men’s basketball team huddles up during their 56-53 win over Georgetown on Jan. 29. Photo taken by Claire Runkel.

The men’s basketball team completed a 72-55 win over Creighton on Wednesday at Hinkle Fieldhouse. Bo Hodges led the Bulldogs with 18 points and seven rebounds. Simas Lukosius and Chuck Harris both added 14 points. The Bulldogs held Creighton to 2-for-22 from behind the 3-point line.

Track and Field at Indiana University

The men and women’s track and field team traveled to Indiana University to compete in the IU Relays on Friday. Niki Ezeh broke Butler’s high jump record, as she jumped 1.71m to break the previous 24-year old program record set by Vanessa Lester in 1997 of 1.70m. Jack Elder finished first in the 60m dash and posted a personal best time of 7.20.

The women’s tennis team fell to Cincinnati on Saturday afternoon 2-5. Natalie Boesing beat a nationally ranked opponent, Elizabeth Pendergast, who is ranked the No. 121 singles player in the ITA Division I rankings. Delaney Schurhamer also added a point for the Bulldogs, taking straight sets at No. 2 singles. Sara Linn and Norah Balthazor won one set each in their matches.

Butler completed the season sweep against Georgetown with a 56-53 win on Saturday afternoon. Simas Lukosius led Butler with 13 points with Aaron Thompson adding 12. Bryce Nze put up his first double-double of the season with 12 points and 12 rebounds. The Bulldogs’ second straight win improves Butler to 11-10 on the season and 4-6 in the Big East.

The Butler men’s tennis team took a 5-2 victory against Cleveland State on Sunday afternoon at the Butler Bubble. The Bulldogs began strong with two doubles wins with victories from No. 2 doubles, Drew Michael and Borja Miralles and No. 3 doubles, Patrick Joss and Zach Trimpe. For singles play, Thomas Brennan went 6-0. Both Michael Karr and Joss also won their matches in straight sets at No. 5 and No. 6 singles. The team is now 2-2 overall and 1-0 at home.

Butler fell to Ball State 1-6 on Sunday afternoon. Natalie Boesing won at No. 1 singles for her second straight singles victory. In doubles, Veronika Bruetting and Delaney Schurhurmer tied 4-4 against Ball State’s No. 2 doubles. The women’s tennis team is now 0-3 overall.

Georgetown’s women’s basketball team defeated Butler 78-62 on Sunday. Celena Taborn led the Bulldogs with 21 points and eight rebounds. Emilia Sexton hit four 3-pointers to score 12 points. Butler had a one point lead at halftime, but Georgetown outscored the Bulldogs 43-26 in the second half. The team is now 1-17 overall and 0-9 in the Big East.