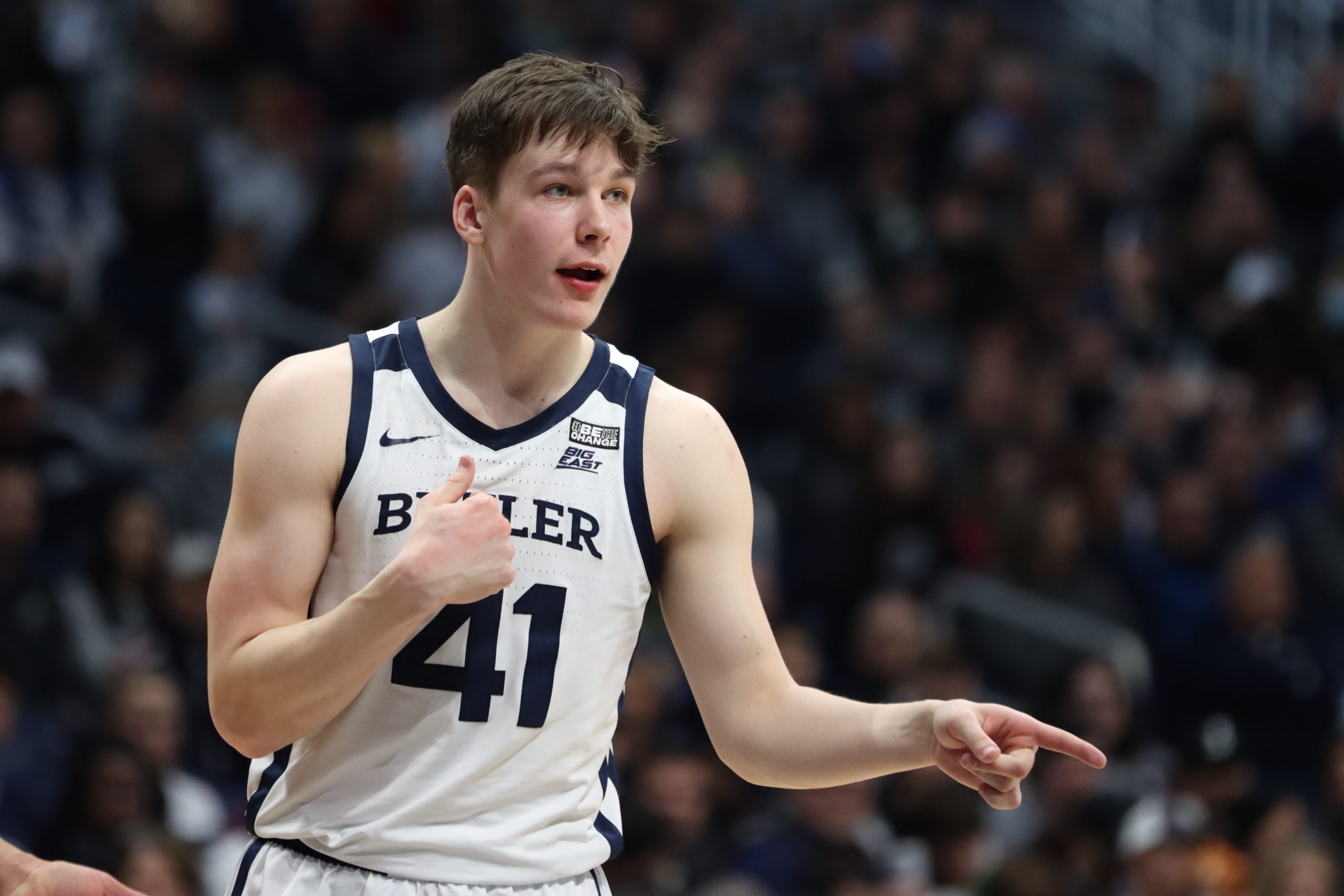 Simas Lukosius had a team-high 13 points in the Bulldogs’ 56-53 win versus Georgetown on Jan. 29. Photo taken by Francie Wilson.

It took a full 40 minutes of basketball, but the Butler men’s basketball team was able to eke out a 56-53 win over the Georgetown Hoyas at home. The Bulldogs improve to 11-10 on the season and 4-6 in the Big East.

Simas Lukosius led the Dawgs in scoring with 13 points, four rebounds, and three steals. Aaron Thompson wasn’t far behind with 12 points on 6-for-8 shooting, five rebounds, three assists, and two steals. Bryce Nze had his first double-double of the season, ending the game with 12 points, 12 rebounds, and three blocks — the same amount of blocks he had against the Hoyas in their previous meeting back on Jan. 13.

Both Butler and Georgetown started off slow from the field, as the score was 4-4 after the first five minutes of play. The score would be 11-11 when the Bulldogs went on an 8-0 run to distance themselves a little. Georgetown would battle back a little, forcing some bad possessions and passes from the Dawgs. They would respond well, however, and Bryce Golden hit a three-pointer with three seconds left to go up by six at the half.

The second half began in favor of the Bulldogs, as they led by as many as 12 at one point. A 12-3 run by Georgetown made the game close once again, as both teams would begin trading buckets, fouls and turnovers. The Bulldogs were up one at the 1:05 mark after a wide-open layup by Aaron Thompson. The following possession, Georgetown’s Aminu Mohammed made a bad pass that resulted in Chuck Harris drawing a foul at the other end. Harris drained both free throws to put the Dawgs up 56-53. Georgetown got a good look at the end on a Donald Carey 3-point shot that bounced off the rim but did not go in.

Butler was able to hold it together after allowing Georgetown to stay in the game. While the offense still wasn’t very efficient, the Bulldogs’ defense picked up the slack and was the deciding factor in their 11th win of the season. Let’s go beyond the box score to dive deeper into Butler’s closest game — and win — of the season.

As mentioned above, the Bulldogs’ offense remained inefficient in today’s game and stagnant at times — similar to how it’s been all season. They shot 38% from the field, 23% from three and 67% from the free throw line — all of which are worse than their season averages. However, Butler’s defense held Georgetown to 36% from the field and 21% from three, both of which lower than what Butler opponents average on the season.

Butler forced 14 turnovers and scored 17 points off those turnovers. On the other hand, they gave up the ball 14 times themselves and the Hoyas scored 15 points off of those. Butler had six blocks and eight steals while the Hoyas had six blocks and six steals. In summary, both teams struggled to keep the ball throughout the game, but the Bulldogs made a few more plays down the stretch in a game that easily could have gone the other way.

The defensive anchor in this game was definitely Bryce Nze. He was grabbing rebounds and blocking shots every which way. 12 boards are his most since February 24, 2021 against Seton Hall and he helped the Bulldogs outrebound Georgetown 40-30, just the eighth time this season Butler has won that battle. His teammate Aaron Thompson explained post-game what makes Nze so effective in general and how it translated to this game.

“I think it’s [Nze’s] IQ and I think he can outsmart a lot of bigs in the post,” Thompson said. “He’s very versatile and can take bigger guys out on the wing, and with smaller guys he can just take advantage of them with his strength.”

Nze showed up big for the Dawgs and will need to continue to do so in order for Butler to remain relevant in the conference.