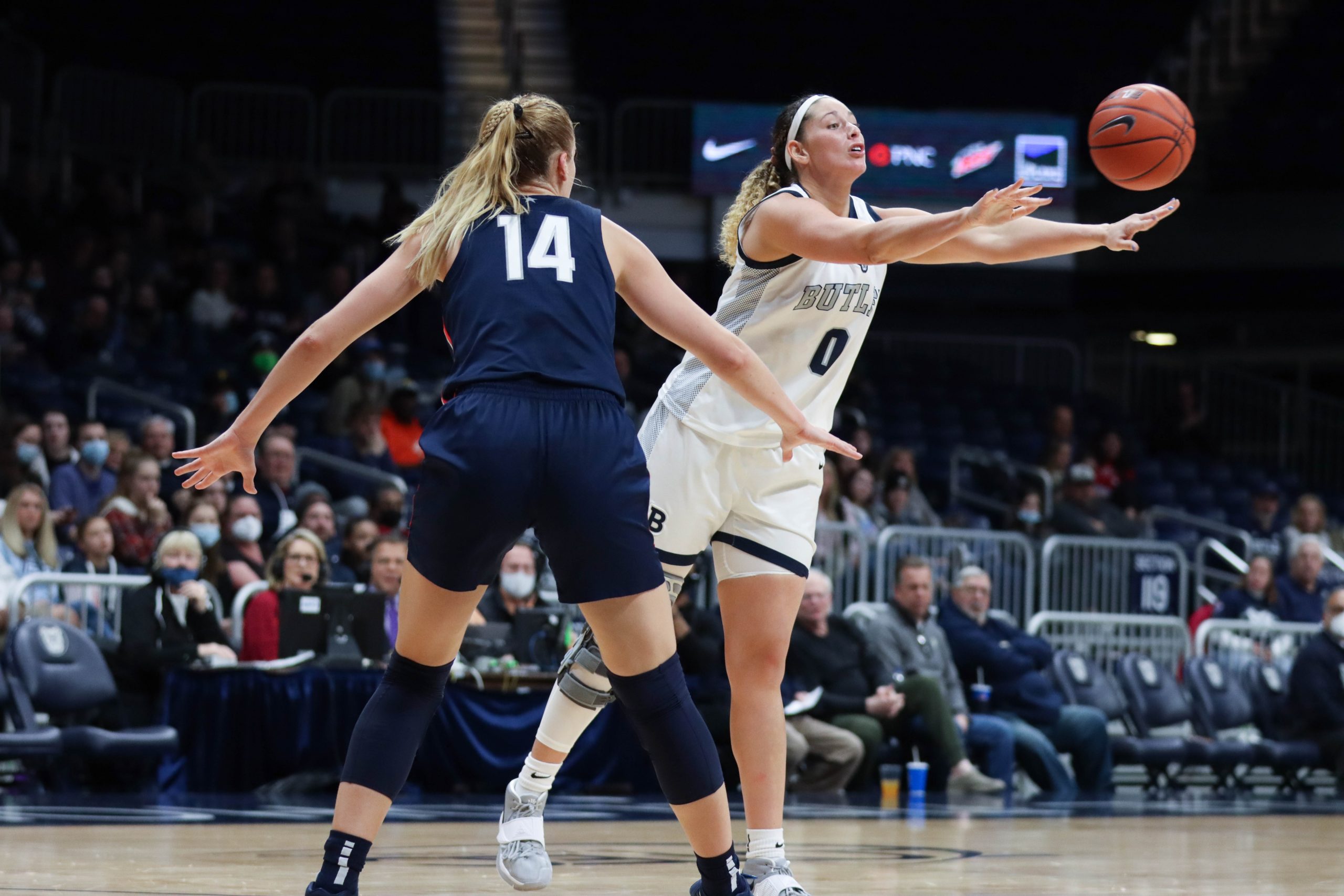 Forward Celena Taborn passes the ball during a matchup against UConn on Jan. 12 at Hinkle Fieldhouse. The women’s basketball team is currently winless in Big East play. Photo by Francie Wilson.

The Bulldogs will look to rebound from a 6-1 loss at the hands of UIndy on Feb. 8 as they take on the 2-2 Ball State Cardinals. Ball State is coming off of two straight losses, a span in which they were outscored 8-0 by their opponents. In their previous two wins, however, the Cardinals won and outscored their opponents 13-1.

The 1-6 women’s tennis team will attempt to right the ship on Wednesday after a rough start to the season by taking on UIndy. The match was originally scheduled to take place on Feb. 2. The Greyhounds have started the year positively and are currently 3-0.

Coach Kurt Godlevske and the Butler women’s basketball team will face a quick turnaround after playing the Friars five days ago in Rhode Island. The Bulldogs led in that game after three quarters but were unable to hold on for the victory. Celena Taborn led Butler with 24 points and seven rebounds in the first meeting between the two Big East foes.

After a strong start to the year going 4-2 at the DePaul Dome Tournament, the softball team will face Ohio State in Florida on Friday morning to kickoff their participation in the 2022 Spring Games. The Buckeyes are currently undefeated at 3-0.

In their second game of the 2022 Spring Games, the Bulldog softball team will face Hofstra, who has yet to compete in a game prior to the Spring Games. Hofstra will be coming off a game against Bethune-Cookman which will take place at the same time Butler will be playing Ohio State.

The baseball season opener will be the first of a three game series against Murray State in Kansas. Butler is coming off of a 14-23 season in 2021, a record that placed them seventh in the Big East. Murray State finished 2021 with a 33-25 record, including an impressive 17-6 at home.

Two days after their match against UIndy, the tennis team will host DePaul in Indianapolis to kick off Big East play. DePaul sits at 2-3 in the young season and just recently snapped a three game losing streak by defeating Northern Illinois 6-1.

Down the stretch of an up and down season, the Bulldogs will face St. John’s on the road in New York. Their first matchup in Hinkle Fieldhouse was a close game that the Red Storm won 75-72 in the middle of a three-game skid for Butler. The Bulldogs are coming off of an upset of No. 18 Marquette on Saturday and last second victory over DePaul, 73-71.

The women’s track team will head up to South Bend for the second time in two weeks for the Alex Wilson Invitational. Butler’s Corinna Pena and Katherine Olsen placed second and third, respectively, in the GVSU Big Meet the previous week.

On the second day of the 2022 Spring Games, Butler will play their first game of the day  against South Alabama. The Jaguars hold a record of just 1-3 in four games prior to the Spring Games. However, their three losses include to No. 14 ranked LSU and a close battle against Illinois in the Tiger Classic. The Jaguars’ tough schedule continues in the Spring Games with games against No. 5 ranked Florida State, Missouri and Ohio State before facing the Bulldogs.

The second game of day two for the Bulldogs will feature the Monmouth Hawks. Monmouth has not played any games prior to the beginning of the Spring Games and is coming off of a stellar 25-9 season in 2021.

Butler women’s tennis will head north for their second matchup of the weekend in Kalamazoo as they visit Western Michigan. The Bulldogs will attempt to shed travel fatigue and regain momentum in this early afternoon contest.

The Bulldogs will continue part two of their three day series against Murray State on Saturday.

Looking to add to its 1-0 record, the Butler lacrosse team will head to Ohio to face Denison in a mid-afternoon affair. Butler secured a victory in their season opener on the road against Kent State, 11-10, and will look to continue their positive start after a 1-11 record in 2021.

The final game for Butler in the 2022 Spring Games will be against Bethune-Cookman who owns a 1-3 record. All of their games so far this season took place at the FAU Invitational. Bethune Cookman will play Hofstra, Monmouth, Missouri and Maryland before taking the field with Butler early Sunday morning.

After hosting Ball State on Wednesday, the Bulldogs will head to Bloomington to face in-state rival Indiana. The Hoosiers are currently 3-3 and are on a three-game losing streak, dropping their last contest to Middle Tennessee State 4-0. Their matchup with Butler will be on the tail end of a large home stand to begin the year spanning from Jan. 22 to Feb. 20.

The Bulldogs will complete their series against Murray State on Sunday and will next compete against Jackson State on Feb. 25.

The men’s basketball team will invite the Big East leading Providence Friars to Indianapolis in an attempt to make a strong push to close out the regular season. Providence took the first matchup 69-62 at the Dunkin’ Donuts Center, as potential Big East Player of the Year candidate Nate Watson led the way with a team-high 21 points.

The Bulldogs will hit the road to face Seton Hall, a game rescheduled from the original date of Jan. 4 due to COVID-19 issues within Butler’s program. This will be the second matchup between the two this season, with the Pirates coming out of Indianapolis with the victory on Feb. 6 by a score of 72-56.

Andra Espinoza-Hunter shined for Seton Hall in that game with 21 points on 5-9 shooting from three, while Tenley Dowell led Butler with 17 points and nine rebounds. The Bulldogs shot just 39.6% from the field in that game and will look to turn it around in New Jersey as they have been much improved since the first matchup.