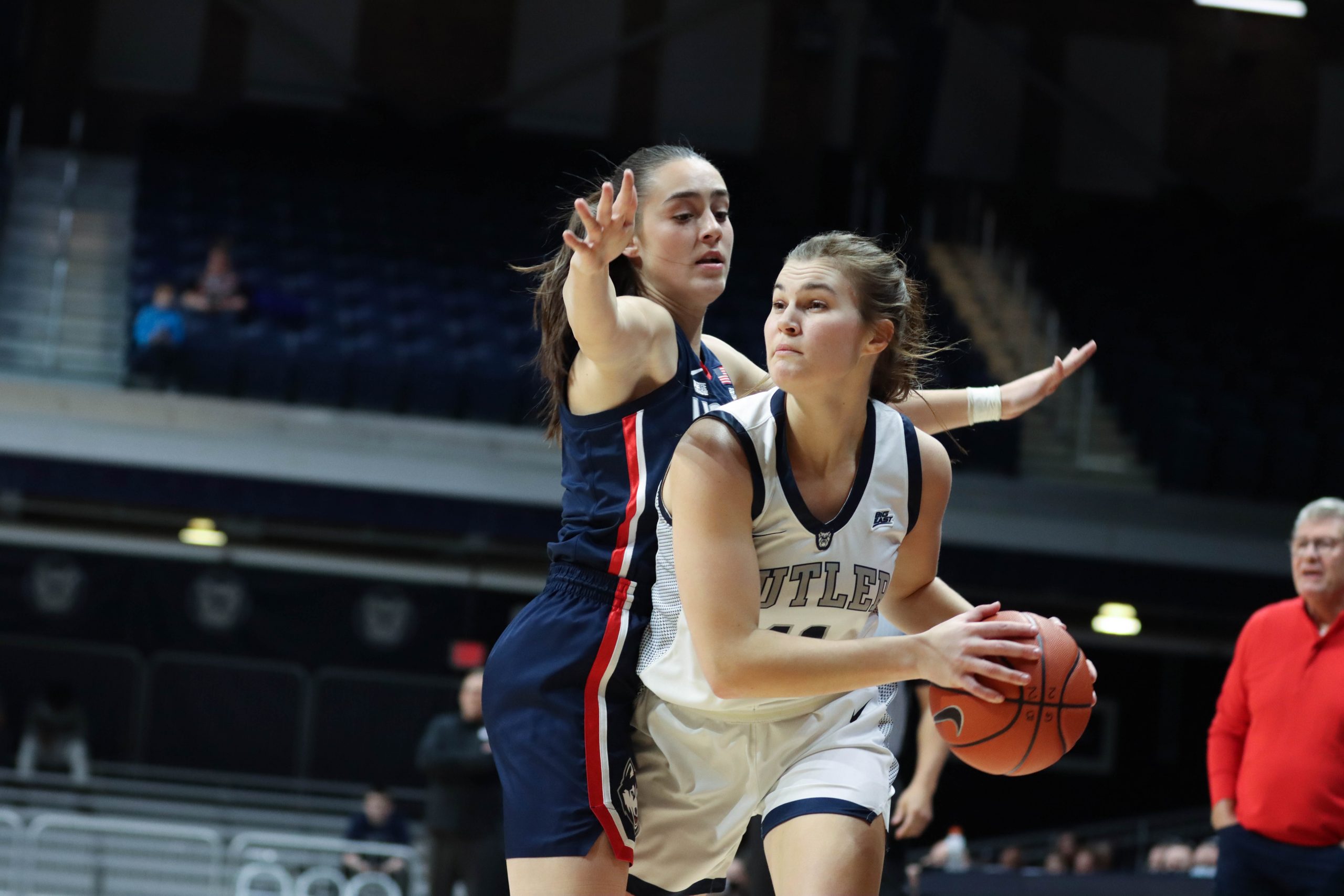 Redshirt sophomore Tenley Dowell looks to get a pass around a UConn defender on Jan. 12. Dowell had a career-high 17 points against Seton Hall on Feb. 6. Photo by Francie Wilson.

The Butler women’s basketball team fell to Seton Hall 72-56 Sunday at Hinkle in a rather competitive matchup.

Tenley Dowell led the way for Butler with a career-high 17 points, while shooting 5-11 from the field and hitting three 3-pointers. Dowell was Butler’s only scorer in double figures, however, the Dawgs did see eight different players score throughout the game.

Andra Espinoza-Hunter led Seton Hall in scoring with 21 points on 8-13 shooting. Including Espinoza-Hunter, the Pirates had five different players score in double figures.

While the scoreboard may not necessarily indicate it, the game was close and competitive throughout. Butler led 42-41 at one point in the third quarter, and only trailed 55-48 at the end of the third quarter. However, Seton Hall outscored Butler 17-8 in the fourth quarter, allowing them to pull away and get the win.

Seton Hall shot 6-11 in the fourth quarter, while Butler only shot 2-14 – a difference-maker in the ultimate outcome of the game.

Despite having an advantage on offensive rebounding, Seton Hall outscored Butler 16-8 in terms of second chance points.

However, shooting the ball was where the two teams differed from each other the most. Seton Hall shot 48.3% from the field, while Butler only shot 39.6% from the field. Outside of Dowell, Butler’s offense really struggled and several players failed to find any rhythm during the game.

A positive for Butler’s offense was their bench. Butler outscored 19-13 in bench points, and the Dawgs saw several new faces, including Sydney Jaynes and Kate Tanner, putting points on the stat sheet. While the spark off the bench was a plus for Butler, the team’s second-highest scorer — Jaynes — only had 8 points.

Butler will need to have more players step up in scoring if they want to rattle off a few conference victories down the road.

Butler’s next matchup is Feb. 9 at 7pm in Hinkle when the Dawgs will take on St. John’s – the first matchup of the season between the two teams.