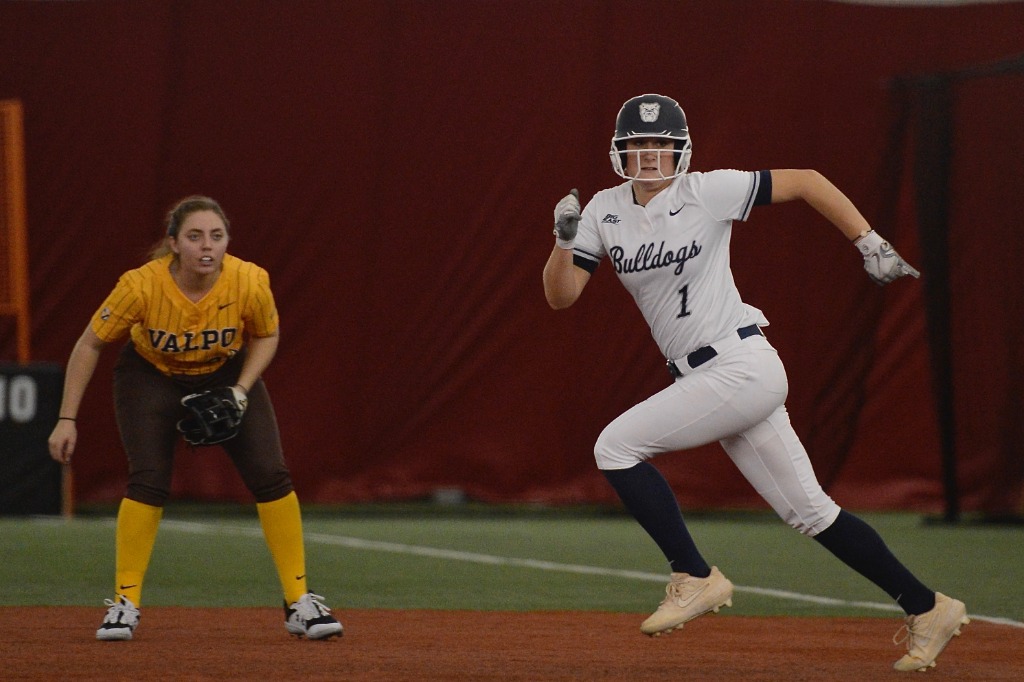 Freshman infielder Ella White makes a dash for second base during a matchup against the Valparaiso Beacons on Feb. 10 at the DePaul Dome Tournament. The Dawgs finished the tournament 4-2, with wins over Valparaiso, Murray State, St. Thomas and Western Illinois. Photo courtesy of John Fetcho.

The Bulldog women’s softball team began their 2022 season with a record of 4-2 at the conclusion of the DePaul Dome Tournament. Butler secured victories over Valparaiso, Murray State, St. Thomas and Western Illinois while dropping two games to Bowling Green. The tournament took place in Rosemont, Illinois from Feb. 10 to Feb. 13.

The productive start to the season is a positive sign for the Bulldogs, who finished the 2021 season with a subpar record of 17-21-1.

Butler’s season opener against Valparaiso was won by a final score of 7-5. The game started out on a low note for the Bulldogs after a wild pitch from junior Mackenzie Griman allowed the Beacons’ Peyton Moeder to score in the first inning. However, a total of 12 hits — including a team high of two from freshman Ella White — powered the Bulldogs to a 1-0 start.

The Bulldogs’ best game, however, came in a 7-0 shutout against St. Thomas. The Tommies were undefeated with a record of 2-0 entering that game, but were only able to muster three hits against the Butler pitching combination of Griman and redshirt junior Madison Seigworth.

In the Bulldogs’ four wins, they have compiled a total of 42 hits. Senior outfielder Bri Avery and senior second baseman Lauren Fey lead the team so far with seven hits in six games, while sophomore catcher Teagan O’Rilley leads the team with five RBIs.

After entering the game to begin the third inning in the season opener, senior Karli Ricketts heads the Butler bullpen with a 2-1 record in three starts and has a team high 19 strikeouts. Ricketts is coming off of an impressive 2021 season that ended with an All-Big East first team selection.

Ricketts has pitched 19.2 innings for Butler, while graduate Alyssa Graves is second on the team with nine innings pitched. Griman took the mound for 8.2 innings and Seigworth has pitched 5.2 innings thus far.

Looking to continue their strong start to the season, the Bulldogs will take the field next on Feb. 18 against Ohio State to kick off the 2022 Spring Games in Leesburg, Florida.