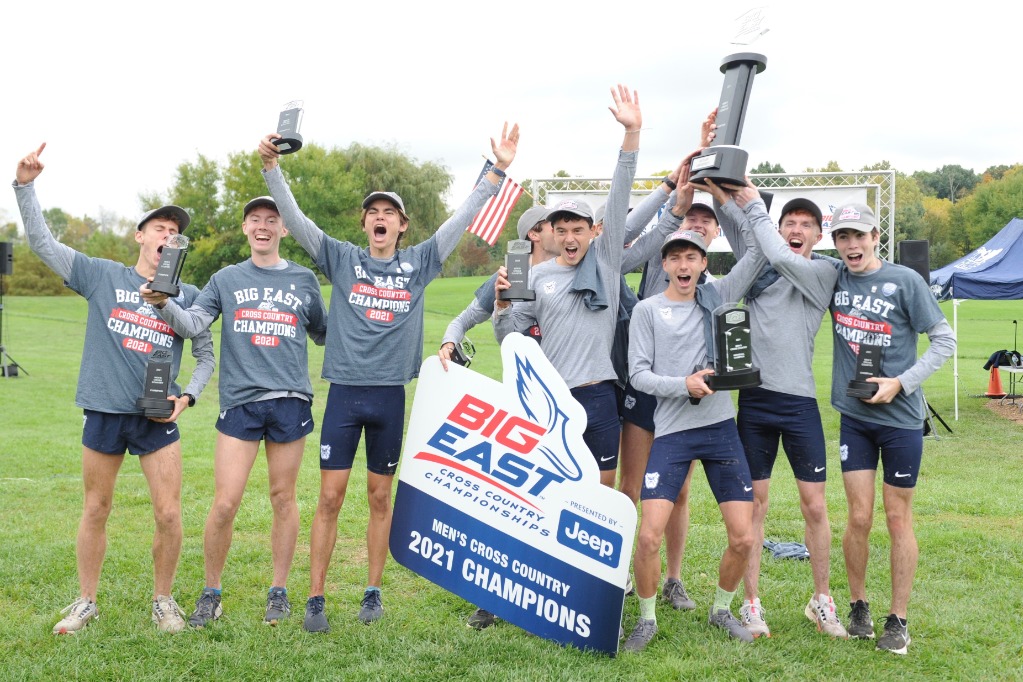 Members of the Butler men’s cross country team celebrating their Big East Championship on Oct. 29. Both the men’s and women’s team qualified for the NCCA Cross Country Championship in Tallahassee, Florida on Nov. 20. Photo courtesy of Butler Athletics.

The Bulldog men have experience running at a high level after placing 13th as a team at the last championship meet held in the spring due to the COVID-19 pandemic. On the other side, the Bulldog women will all be making their national debuts as the women have not qualified as a team since the 2012 season.

Head coach Matt Roe was thrilled to see both programs reach such an accomplishment.

“We’re excited, but I’m a little bit relieved,” Roe said. “I felt like both teams had had a good chance to make it, so to finally see both our names pop up knowing that we had pulled it off felt amazing.”

The journey for the men’s cross country team this season has been filled with many achievements. The expectations were high heading into the season as Butler received a preseason ranking of ninth-overall in the country by the United States Cross Country and Track and Field Coaches Association.

The men’s team certainly lived up to these predictions as they captured the Big East Championship title on Oct. 29.  Butler finished with three runners in the top-five with graduate student Simon Bedard claiming the individual title.

On Nov. 12, the Bulldogs continued their reign at the NCAA Great Lakes Regional placing fifth as a team. Bedard and redshirt senior Barry Keane distanced themselves from an elite field for almost the entire race. The duo would claim the top two spots individually in the meet earning themselves All-Regional honors.

These two races were crucial to the Bulldogs securing one of the 13 at-large berths for the NCAA Championship race. After such a successful season, Bedard is ecstatic about making another return to the national meet.

“No matter how I run, my goal is to just do better than I did last year,” Bedard said. “My confidence in myself and the team has only gotten stronger as the season’s progressed, so the skies are the limit for us.”

Keane also shares how proud he is of their team for reaching such an accomplishment.

“It’s really impressive for a small private school like us to be competing on the same level of these larger schools,” Keane said. “I think it’s a huge achievement for ourselves, but also for Butler as a whole.”

The Butler women have had an outstanding season to remember as well. Coming into the season, there was much uncertainty surrounding the team, as a mix of experience and talent held a lot of potential in the team.

The USTFCCCA didn’t have the women making it out of their regional, as they were predicted to finish in a mere seventh place. The team used this as motivation to embody the underdog mentality.

At the Big East Championship, the women had an impressive finish of second place as a team Redshirt senior Angelina Ellis led the way for the Bulldogs finishing third-overall individually.

Similar to the men, the women took fifth as a team at the Great Lakes Regional. Ellis was joined by redshirt junior Mia Beckham and graduate student Kami Hankins in earning All-Regional Honors for finishing in the top-20.

Their performances along with a solid resume helped propel the team into an at-large berth to unite with the men at the national meet.

For the Butler women, making it to nationals this year is a little more special — as for many of them it will be their first time. Ellis is eager to race in her first national meet alongside her teammates.

“In my five years at Butler, I’ve never had the chance to race nationally in a cross country meet,” Ellis said.“We’re all super close like a family, so to finally have the opportunity to experience that with all 16 of us feels really great.”

Butler will be one of 31 programs racing at the NCAA Cross Country Championship race hosted by Florida State University on Saturday, Nov. 20. Of these teams, Butler women and men have the third and fifth smallest enrollment in the entire race.

“I’m hoping that there’s other schools out there that are looking at us and saying, ‘if they can do it, we can do it,’” Roe said.  “We’re trying to pave a pathway for other similar programs to be one of the best programs in the country.”

Coach Roe believes that no matter what happens, the team is going to make the most of their opportunity by showing the NCAA they belong.