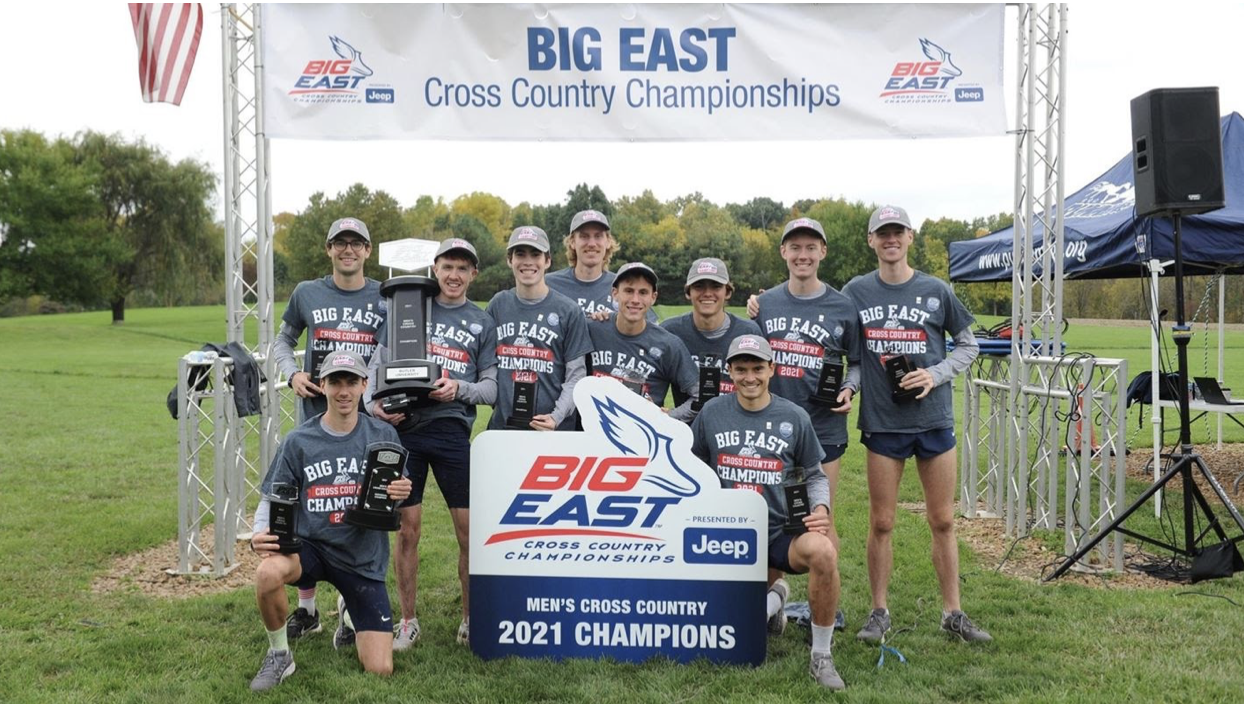 The Butler men’s cross country smiles for a team photo after taking home the individual and team title at the Big East Conference Championship race on Oct. 29. Photo courtesy of Butler Athletics.

Butler cross country had an outstanding showing at the Big East Conference Championship — filled with trophies on both sides of the program. On Oct. 29, the men’s team repeated as Big East Champs while the women finished second as a team at the Northview Church Course in Carmel, Indiana.

Graduate student Simon Bedard battled with 2020 Big East individual champion Villanova’s Haftu Strintzos the entire race as the two would break away from the pack early. In the final stretch, Bedard turned on the jets to outkick Strintzos and win the 8K race at 23:58.6.

Bedard’s performance earned him National Athlete of the Week honors by the U.S. Track and Field and Cross Country Coaches Association. This is the first time a Bulldog has received the award since Erik Peterson earned it in 2015.

Redshirt seniors Barry Keane and Clark Otte followed suit in third and fifth at 24:03.2 and 24:22.7. Butler finished with four runners in the top 10 for the second straight season with redshirt sophomore Jack McMahon placing ninth in 24:35.2.

Rounding out the runners who earned All-Big East honors were redshirt freshman Will Minnette and graduate student Evan Byrne in 17th and 18th with times of 24:57.1 and 24:58.2.

Redshirt sophomore Ryan Adkins crossed the line next for the Bulldogs in 26th at 25:31.3 with redshirt freshman Nate Lantz not too far behind in 28th at 25:44.3. Butler’s last runners included graduate student Pierre-Louis Detourbe and redshirt sophomore James Sweeney, finishing 30th and 31st in 25:52.1 and 25:54.7.

The Bulldogs team score of 35 was enough to take home the crown ahead Georgetown and Villanova’s scores of 49 and 63.

On the women’s side, a second-place finish in the 6K race was highlighted by redshirt senior Angelina Ellis in third at 20:53.8.

Redshirt juniors Maddie McLain and Mia Beckham finished side by side taking 11th and 12th at 21:11.9 and 21:12.2. The last runner to receive All-Big East honors was graduate student Kami Hankins, with a 19th-place finish in 21:38.7.

Rounding out the top five scorers was redshirt senior Emily Royston in 21:48.6 for 22nd.

Margo Hornocker finished as the women’s final runner in 39th with a time of 22:44.7.

The women claimed the silver as a team with a score of 67, falling just three points short of the defending Big East Champions Georgetown’s score of 64.

Butler’s next race will be at the Hoosier Invitational next Friday, Nov. 5 as they prepare for the NCAA Great Lakes Regional on Nov. 14.