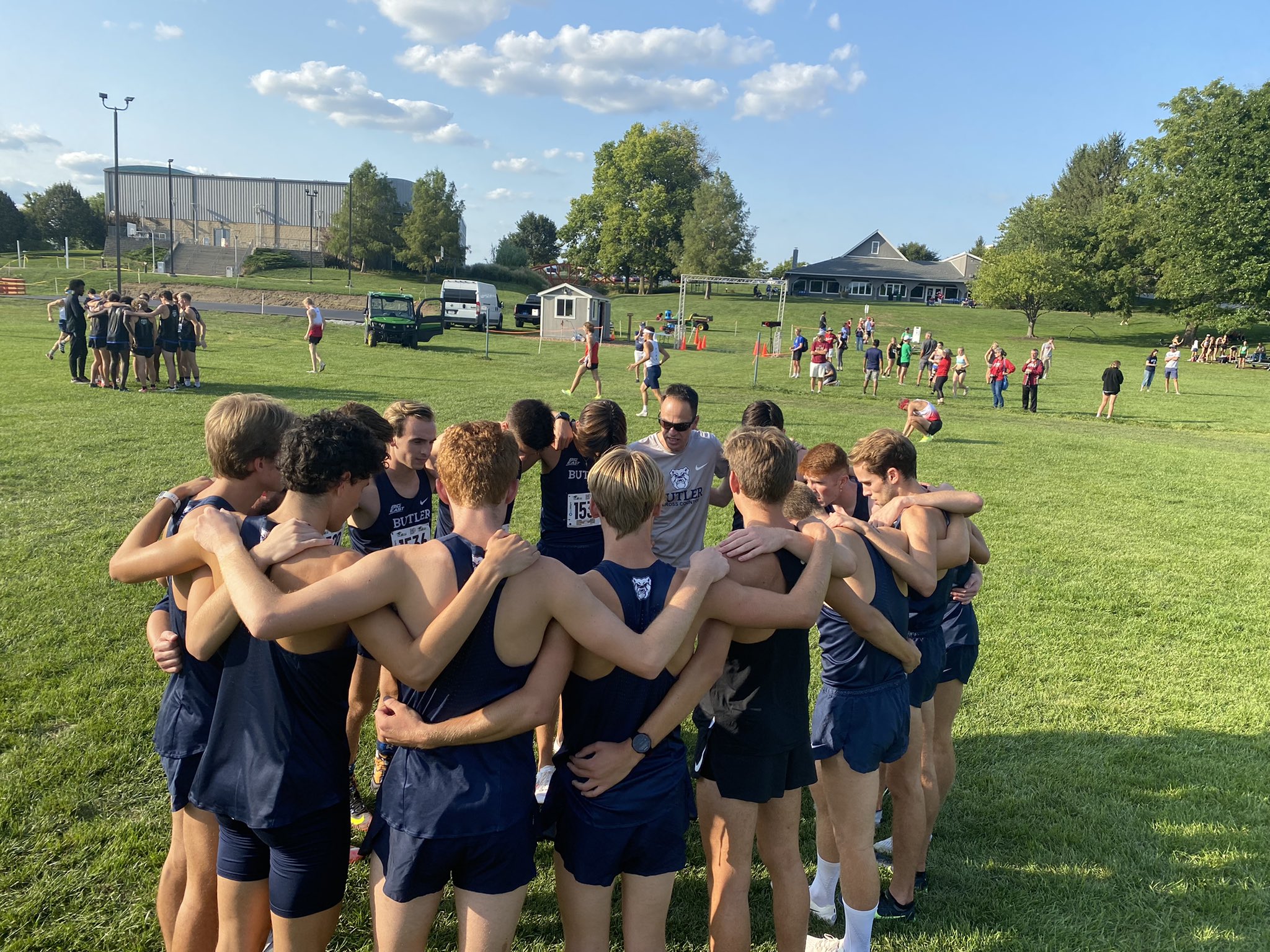 The men’s cross country team huddles together prior to the Jaguar Classic at IUPUI on Sept. 10. Photo courtesy of @butlerXCTF on Twitter.

The Butler men’s and women’s cross country teams are back and ready to return to the grass fields. The men’s team will look to build off of last year’s success with a majority of their key pieces returning for this season. The women’s team are bringing back their entire squad from last season along with rising young runners retaining an underdog mentality. Both squads are loaded with a diverse amount of talent ready to make some noise.

Last year’s men’s season was one to remember. Despite only running one regular race in a pandemic-filled season, the Bulldogs took home the crown at the Big East Championship race to qualify for nationals. At the NCAA National Championship meet, the team finished a historic-best 13th place as a team.

Now headed into this season, the Butler men’s cross country team has already received some attention for their accomplishments. The U.S. Track & Field and Cross Country Coaches Association released their preseason coaches poll rankings with Butler being ranked ninth overall in the country. This is the highest preseason ranking the Bulldogs have received in program history.

The Bulldogs have five upperclassmen rejoining the team, including graduate student Bedard. The France native led the way for the Bulldogs at nationals finishing 37th overall — earning himself All-American Honors. Bedard believes the team is ready for another crack at the national meet.

“The expectations are higher, but I believe we as a team will be up for the challenge,” Bedard said. “Last year was something special, but I think if we continue to push each other all season long, I think we can finish in the same spot if not even better.”

Unlike Bedard, however, head coach Matt Roe has a different approach to the season.

“We now know what it takes to be successful at this level, but last year has nothing to do with this year,” Roe said. “Every year is unique and every team is different. We are never defending a championship — we’re just trying to win the next one.”

Regardless, the Bulldogs are poised for another successful season that might turn a few heads.

While the women’s team didn’t make the National Championship race last season, they still finished with a solid season of their own. They dominated their one invitational at the Lipscomb Winter Classic with all seven runners finishing in the top 12. The women then finished fourth out of 11 teams at the Big East Championships.

Looking ahead to this season, the women will be a veteran-heavy team. All seven runners from the Big East Championship last season will be back and on the hunt for more success. However, the up-and-coming young talent will also be fighting for a spot in the top seven on the team.

Senior Angelina Ellis, who was the first Bulldog across the finish line in 11th place at the conference meet last season, looks forward to building as a team on their fourth place finish last year.

“We pretty much have our entire team back from my junior year,” Ellis said. “With all of our experience combined with some of the new freshmen, I can’t wait to see how far our team can go.”

Roe agreed with Ellis, adding more about the impact of the depth on the team.

“I think our women’s team will be at a new level this year,” Roe said. “We don’t know exactly who’s going to run where, and the unknown is really exciting.”

Despite Roe’s decision to rest some of their top runners at the first two races, the Bulldogs have already started their season red hot. At the season opener on Sept. 3. at the Butler Twilight, the men finished second only behind the University of Cincinnati while the women walked away with a win. The men redeemed themselves by joining the women in winning the race to complete the sweep in both races on Sept 10. at the IUPUI Jaguar Classic.

Next up on the schedule for the Bulldogs will be the Joe and Piane Invitational in South Bend, Ind. on Friday, Oct. 1.