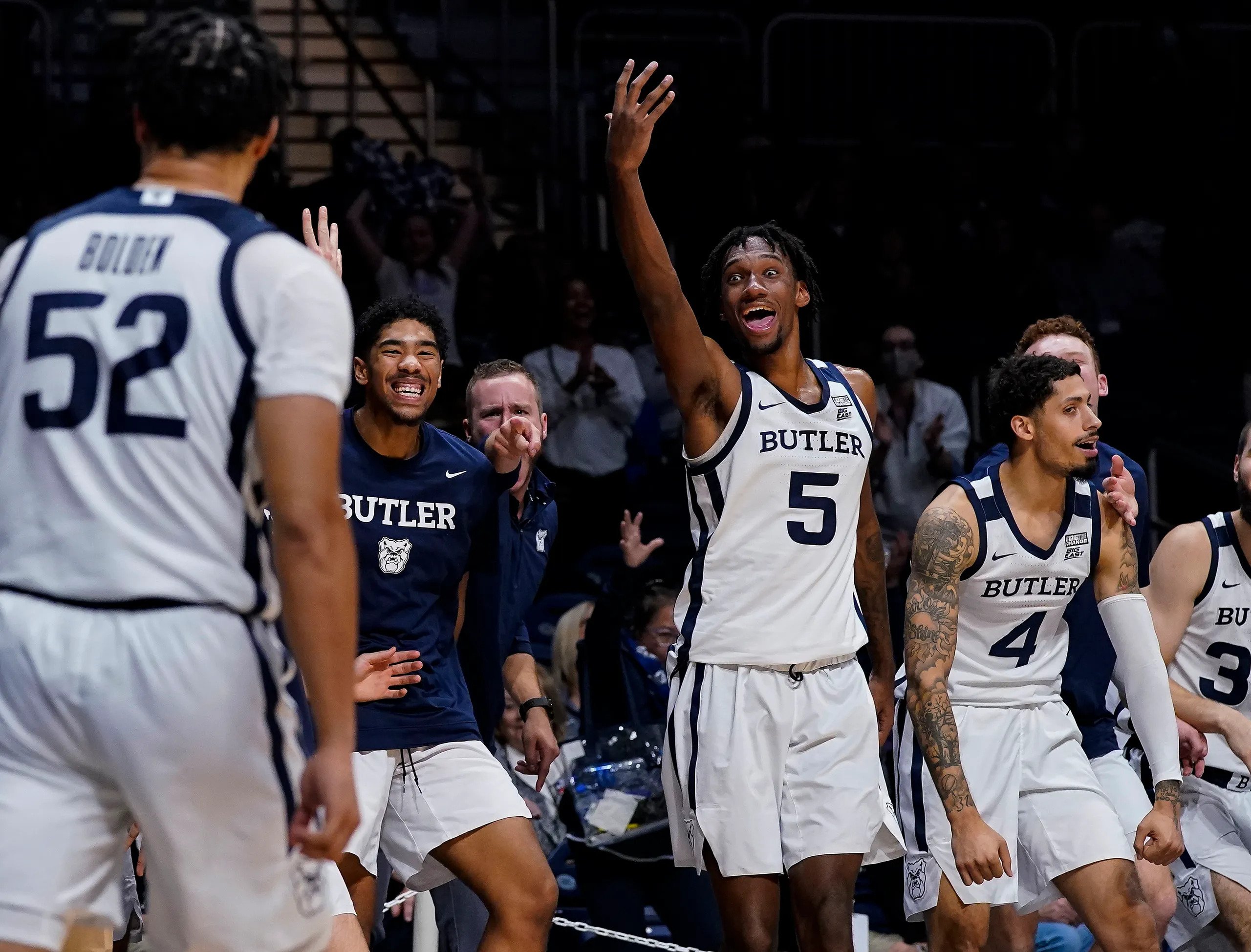 The Butler bench celebrates after a Jair Bolden bucket. The Bulldogs improved to 3-0 on the season, defeating the Troy Trojans 70-59 on Nov. 13. Photo by Grace Hollars.

Both the men’s and women’s teams scored fifth out of 31 teams at the Great Lakes Regional on Friday, Nov. 12. Simon Bedard and Barry Keane took first and second place finishes among the men’s competition en route to the team’s top-5 finish. For the women, senior Angelina Ellis placed ninth overall, with two other Bulldog top-20 finishers — Mia Beckham in 16th and Kami Hankins in 19th. The Bulldogs finished ahead of locals Indiana and Purdue. Both the men’s and women’s teams qualified for the NCAA Cross Country National Championship in Tallahassee, Florida on Nov. 20.

The men’s team dominated in a 85-53 win over Central Arkansas on Friday, Nov. 12. Led by four double-digit scoring Bulldogs, Butler shot an impressive 57% from the field and shut down sophomore Collin Cooper, who fouled out, and went 0-4 from the field with five turnovers. Ty Groce impressed in his Butler debut as well, and scored eight points and six rebounds in 18 minutes off the bench. Groce, who returned from injury, brings size and shooting ability off the bench for the Dawgs.

The Bulldogs improved to 3-0 the next day with a win against Troy, beating them 70-59. The key to Saturday’s victory was Chuck Harris and Jair Bolden combining for 44 points and eight 3-pointers. Jayden Taylor also put up 10 points for the Bulldogs. He has scored in the double digits every game so far in his collegiate career. Troy took an early lead, but Butler tied it up at half thanks to Bryce Nze’s ridiculous buzzer-beater. Harris and Bolden started to heat up after halftime, and Butler was able to pull away for an 11-point victory.

The women’s team was defeated by Wisconsin on Nov. 12, losing 2-1 in the first round of the NCAA tournament. Wisconsin midfielder Natalie Viggiano scored both goals for the Badgers. Butler’s offense got going in the second half with a goal by Morgan Kloosterman, however, it wasn’t enough to win in the end. Despite the loss, this was an impressive season for the women’s team, finishing 15-5-1, good for third in the Big East.

The men’s team fell short to No. 18 ranked Providence in the semifinal round of the Big East Championship on Nov. 11. A few missed opportunities, including a penalty kick in the 57th minute, would be the downfall of the Bulldogs. Providence was able to make the most of their opportunities, making 50% of their shots on goal. Butler was not announced as one of the 32 teams to make the NCAA tournament this season.

The women’s team was outmatched against DePaul on Nov. 12, losing in four sets. Getting in front quickly was the key to this game, as DePaul’s early lead in the first two sets led to wins, and Butler’s single win in the third set was initiated off of a hot start. In the loss, Butler’s Brittany Robinson achieved her 500th career kill for the Bulldogs.

The Bulldogs lost in three sets to Marquette on Nov. 14, being outscored 75-43. Butler could not get their offense going while Marquette continually went on runs. A bright spot for this game was Butler’s Jaymeson Kinley achieving her 1000th career dig. The Bulldogs are now 14-15 on the season, with two games left to end the season over .500.

The women’s basketball team lost to No. 8 Indiana 86-63 on Wednesday, Nov. 10. Despite freshman Alex Richard’s 20-point effort, the Hoosiers went on a 8-0 scoring run near the end of the second quarter and ultimately put the game away.

On Saturday, Nov. 13, the Bulldogs lost to Western Illinois 73-46. The Butler offense couldn’t get it going against the Leathernecks, shooting 27% from the field and 17% from three. Western Illinois made 16 3-pointers in their victory. Despite this, Butler did a good job of forcing turnovers, snatching 10 steals — four of them from freshman Alex Richard.

In their third home game in six days, the Dawgs lost to Ball State 70-56. After a rough performance on Saturday, freshman Kendall Wingler led the team in scoring with 17 points and shot 50% from three. The Cardinals, who didn’t shoot much better than the Bulldogs, won the game by scoring 20 points off of 26 Butler turnovers.

Butler was defeated by Valpraraiso last Saturday 47-3 in the Battle for the Hoosier Helmet. The Bulldog’s only three points were scored on their opening drive after a 48-yard completion by Bret Bushka, the longest of the game. Bushka didn’t throw any interceptions, but the Beacons simply overpowered Butler with 421 total yards of offense compared to 191 for the Bulldogs. Butler hopes to finish 3-8 with a win against Marist in their season finale on Nov. 20.