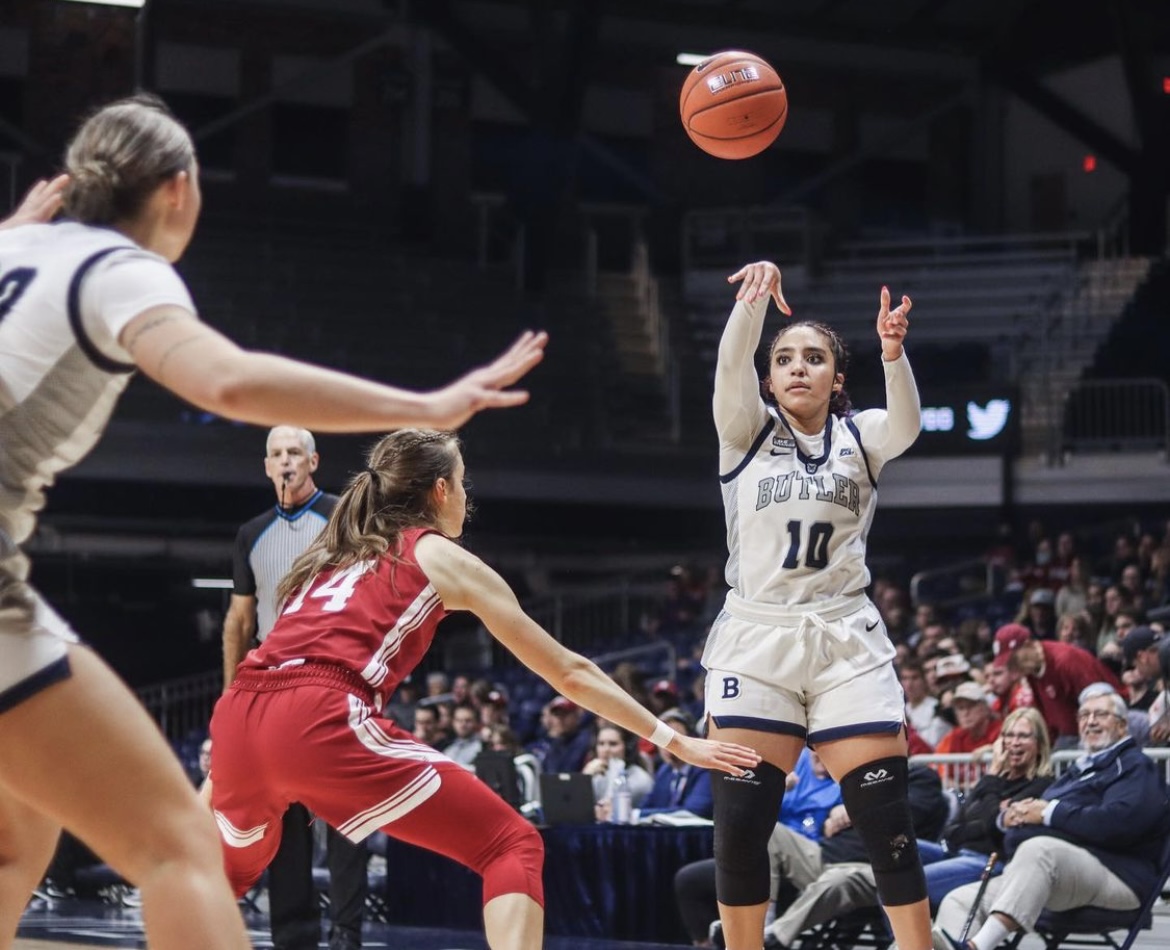 Freshman guard Trinity White makes an entry pass during Butler’s game versus No. 8 Indiana on Nov. 10. The Bulldogs are now 0-2 after their loss to Western Illinois on Nov. 13. Photo by Grace Denckhoff.

The Butler women’s basketball team was unable to find their first win of the season against Western Illinois, falling 73-46. Butler struggled to stop the red hot shooting of Western Illinois, as the Leatherneck’s shot 41.9% from the field and 39% from three.

Butler’s senior guard Emilia Sexton led the team in scoring with 10 points. Behind Sexton was freshman Trinity White who had 8 points. Freshman guard Zoe Jackson and freshman forward Alex Richard both added 7 points of their own. As a team Butler struggled to get into any rhythm — shooting just 28% from the field and 17% from the three.

The Bulldogs’ struggles started with their inability to protect the ball. Butler had 21 turnovers, with Western Illinois scoring 28 points off those turnovers. The Bulldogs often got sped up and would more often than not end up making the wrong decision. Early turnovers especially hurt the Bulldogs who were never able to recover.

Inexperience played a big role in the team’s inability to limit turnovers. The Bulldogs have five freshmen and a redshirt freshman playing significant roles. In addition, the already young team lost their catalyst and leader, graduate student Genesis Parker, to what is likely a season ending injury. Parker, if healthy, is Butler’s primary ball handler who not only runs the offense but is the teams go-to scorer. On and off the court, Parker is seen as the team leader who many of the young girls on the team look up to.

On the defensive end, Butler struggled to get out to the Western Illinois’ shooters. Guards Elizabeth Lutz, Mallory McDermott, and Anna Deets all shot over 50% from the 3-point line. The Leatherneck’s weren’t afraid to shoot either — shooting 41 3-pointers.

Although this game may have highlighted some of the flaws this young Butler team has, one could see why the program has such a bright future ahead. Despite being down big for almost the entirety of the game Butler played with a fearless mentality, continuing to play aggressive on both ends and never losing confidence in their ability to shoot.

Alongside a strong mentality, Butler’s freshmen displayed promising flashes of talent. Richard, who came off a 20 point performance against eighth ranked Indiana was a strong presence inside on both ends. The forward made multiple high level post moves but just couldn’t get her shots to fall. Defensively, Richard had a team high four steals.

Guard Kendall Wingler is another exciting young player. The redshirt freshman recorded her first start as well as the most minutes played for the Bulldogs. Wingler showed her ability to beat her defender off the dribble and create for others. Similarly, primary ball handler Zoe Jackson showed her capability to handle defensive pressure and beat a defender off the dribble. Jackson and Wingler combined for seven assists — Jackson with four and Wingler with three.

Off the bench, Sydney Jaynes and White played big minutes. Jaynes was influential on the boards grabbing six rebounds and adding four points. White looks to be a well-rounded player as she possesses a smooth shot and is a good rebounder for a guard.

Going forward in the season, the Bulldogs will have their inconsistencies like any other young team would. It also wouldn’t be a surprise to see the Bulldogs start to improve sooner rather than later due to the talent and fight Coach Godlevske has in his freshman class.

Butler will look to bounce back on Tuesday, Nov. 16 when they play Ball State at Hinkle Fieldhouse.