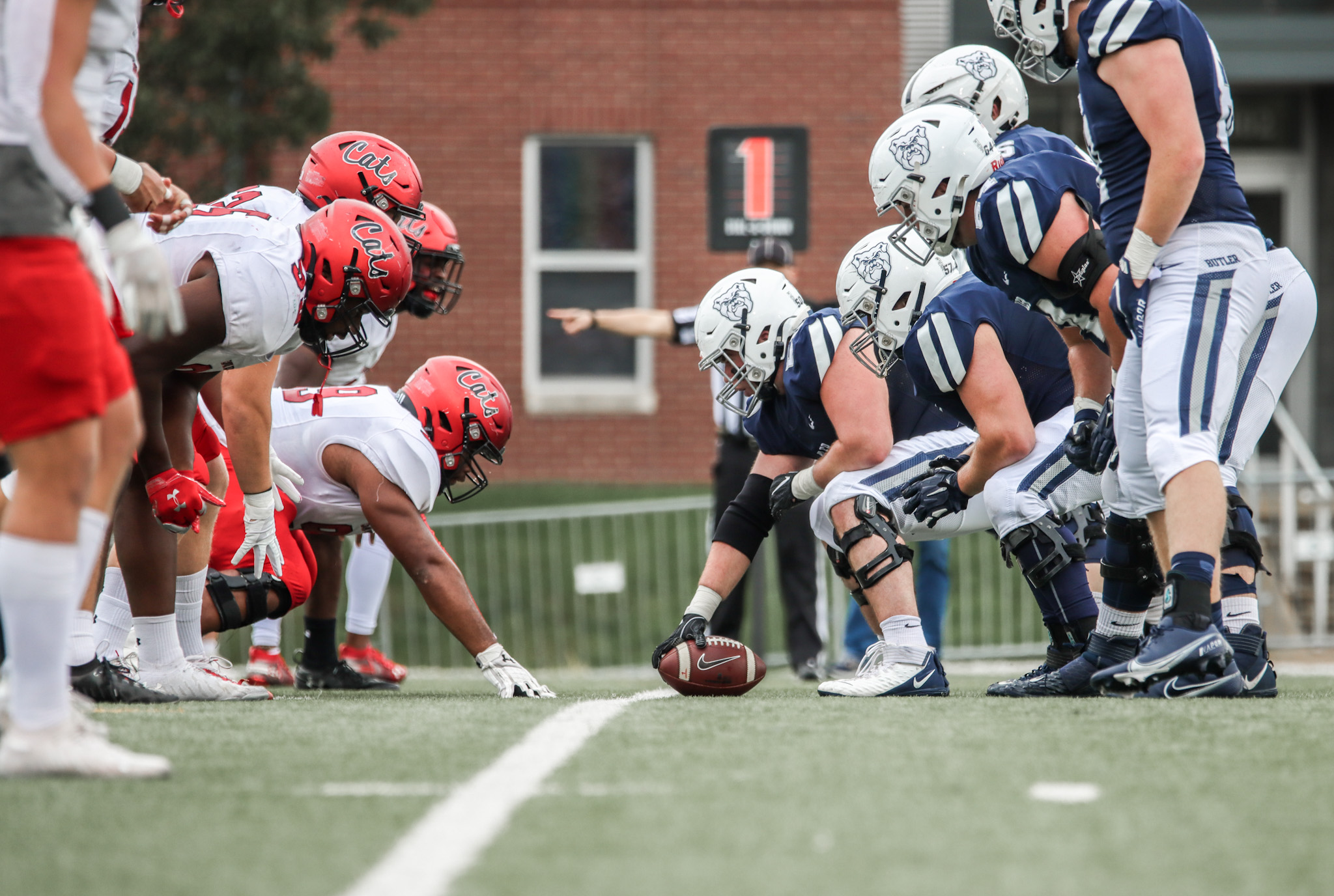 Butler’s offense lines up against Davidson’s defense in a matchup on Oct. 23. Butler went on to lose 49-35. Photo by Grace Denckhoff.

Butler football fell to Valparaiso University 47-3 on Saturday, Nov. 13 and drop to 2-8 on the season. The Hoosier Helmet will remain with Valparaiso for the second year in a row.

The Bulldogs struggled offensively all game and only had a total of 191 yards. Valparaiso put up 421 yards of offense and averaged 6.9 yards per play.

Butler scored on their opening drive with a 48-yard connection from quarterback Bret Bushka to receiver Johnny O’Shea that put the Bulldogs in field goal range. JJ Wadas kicked the 27-yard field goal to get Butler on the board first 3-0.

The Beacons responded on a six-yard pass from quarterback Ben Nimz to tight end Connor Hebbeler to take the lead 7-3.

Valparaiso’s next possession resulted in another score as Nimz found open receiver Ollie Reese for 43-yards to get the Beacons in field goal position. Brian Bartholomew kicked a 24-yard field goal — extending their lead 10-3.

The rest of the game was all Valparasio as they dominated on both sides of the ball.

Early in the second quarter, Nimz hit running back Barret Labus for a 15-yard touchdown. Later, Nimz connected with receiver Matt Ross for a 38-yard completion.

With less than a minute left to go in the half, Nimz ran it in himself to take advantage of the scoreboard 30-3.

The Beacons kept pouring it on after halftime by adding a 63-yard touchdown drive to open the second half. Later in the third quarter, running back Robert Washington crossed the goal line from one yard out, followed by Bartholomew kicking a 45-yard field goal to extend their lead 40-3.

Valparasio scored one more time in the fourth quarter to cap off their performance with Washington running the ball in from 6-yards out. The Beacons secured the Hoosier Helmet with a final score of 47-3.

Butler will end the regular season on Saturday, Nov. 20 at Marist — kickoff is scheduled for noon.