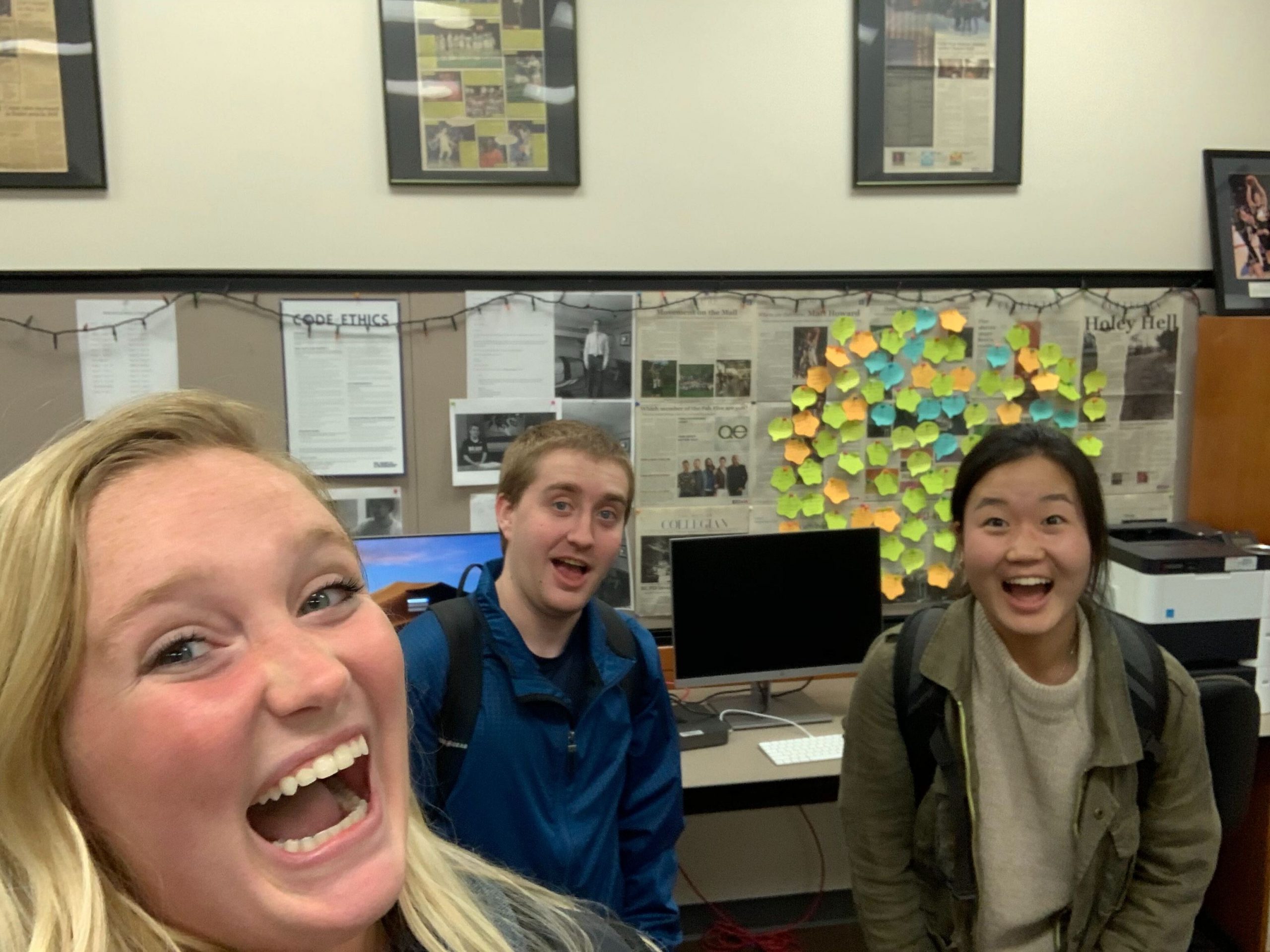 Managing editor Meghan Stratton (left), has taken selfies of digital managing editor Josh Doering (middle) and editor-in-chief Jessica Lee (right) at the end of every Tuesday night after the pages are sent in for print. Some are joyous, like this one, while others are more pained — it correlates with whether it’s 2:30 a.m. or 4:30 a.m. Photo by Meghan Stratton.

In preparation of transitioning The Collegian to next year, I have dreamt of what it’d be like to do this all over again — and dismissed that rogue, nightmarish thought two seconds later. It is time to move on, I repeatedly scolded myself, even as I reread my editor-in-chief application.

In my letter to the staff, I had written, “Journalists, I believe, have their own language.” More than a year later — a whole lot more seasoned and, dare I say, wiser — I still believe that.

Like any other language, there’s more to it than the words spoken, the words written. It’s more closely aligned with the community that journalists build, which is based on more than just our common drive to try to understand different phenomenons. Behind the words are connecting history, emotions and stories.

I’m reminded of this again as I struggle to write a farewell to a newspaper that means so much more to me than just a weekly publication, a thank you to our readers, and a recognition of the overwhelming sense of pride I have for this staff. Luckily, I am not the first to try to convey all those feelings into words. Like I said, our language is founded in history.

Katie Goodrich was my first editor-in-chief. In her farewell letter, she said, “Working for a college newspaper is not supposed to be easy.” As usual, she was right.

Before the school year even began, we reported on the new business building opening, Scotty’s Dawghouse closing and the return of a fraternity. My first semester, like the first semesters of many editors-in-chief, was not easy, but all the challenges taught me well. By the time second semester rolled around, I’d gotten pretty used to this gig. Call it a sixth sense, a gut feeling, but it’d become easier to navigate tough decisions and to predict when a Tuesday publication night was going to be more of a Wednesday publication morning.

And then, I was staring at a story nobody expected or wanted: Butler University will close for the remainder of the semester. That sixth sense, that gut feeling, was quiet. I was in uncharted territory. From that moment on, I would have to lead my team through the dark, and I couldn’t see a damn thing.

But I’m not the first one to chart new territory. This may be the first time we’ve ever gone “online only” — with our staff flung across the country, working virtually yet together — but The Collegian was “print only” until 2009. The Collegian successfully expanded to online, and this past fall, the website passed 1 million views. The Collegian’s budget was cut in half in 2012, yet the paper still won more than 130 state, regional and national awards between 2011 to 2015. The Collegian has transitioned from a weekly paper to a monthly paper back to a weekly in a span of three years.

The Collegian, in its 134 years, has seen and weathered a lot of changes — both minimal and monumental — to be the newspaper it is today. Even though I’ve never had my plans disrupted like this, The Collegian has, and it has more than just survived.

“But we hope with each new change we can be that much better for our readers,” Alexis Price, my second editor-in-chief, said in her farewell letter.

It was never a question of “if” The Collegian would continue through this pandemic, but “how.” This was an unexpected change, yes, but I hope we answered your questions during this uncertain time. I hope we were better in serving you, because I can only say thank you for being the reason we change and adapt and improve.

If I produce a paper on behalf of our readers, I can only do so because of the staff that stands with me.

As my last editor-in-chief Dana Lee said: “I owe a great deal to The Collegian.” The Collegian is more than just a weekly publication, in print or online. The editors, reporters, designers, newscast members, photographers — they are The Collegian.

These student journalists bring you your campus news between and during classes, in person or in quarantine. Not only are they curious about their surroundings, they are persistent in finding their answers. They go to bed closer to sunrise than sunset, cutting and adding and rearranging every word because they want the story to be told right, to give it the attention it deserves. They are as resourceful as they are fearless.

And I owe a great deal to them.

I don’t dream up scenarios of doing this all over again, of reliving what I’d do differently — there’s no point in going backwards. The Collegian will enter its 135th year of serving the Butler community, and I pass the baton into the more-than-capable hands of Meghan Stratton, who will encounter her own challenges, change this paper for the better, and build upon our history.

As I echo past editors-in-chief, I am all the more certain in The Collegian’s bright future.