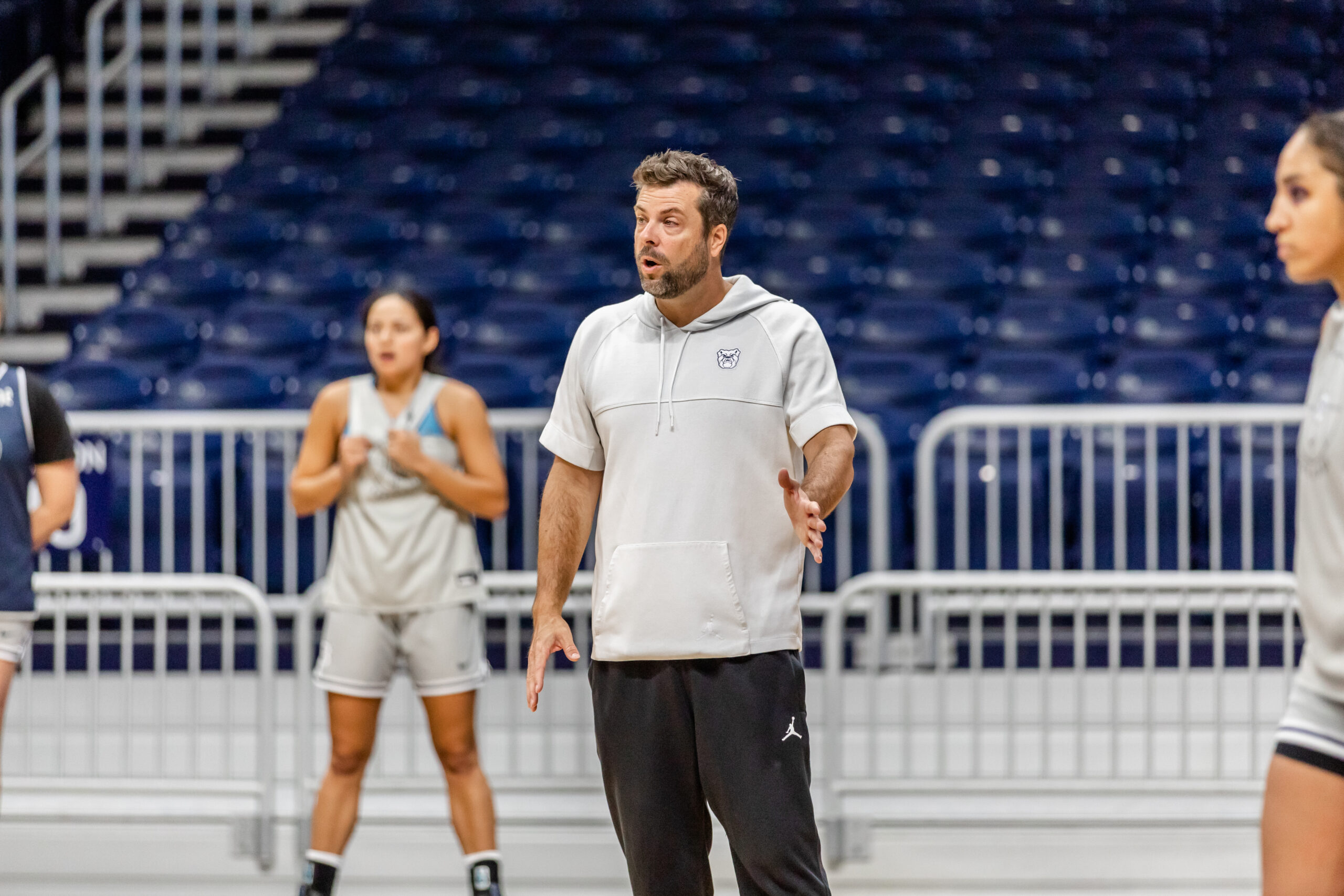 For a team that has been 4-44 over the last two seasons, it is hard to know exactly where to put expectations for the 2022-23 Butler women’s basketball team.

After being dead-last in pretty much every statistical category of the Big East last season, Butler decided to go in a different direction at the end of the season by firing previous head coach Kurt Godlevske after eight seasons.

Butler hired Austin Parkinson on April 12, officially welcoming him as the next head coach for the Bulldogs. Parkinson spent 12 seasons at IUPUI where he posted a record of 224-141 and earned the program’s first NCAA Tournament appearance by winning the 2022 Horizon League Championship. Coming to Butler was a “dream come true” for Parkinson, who said the combination of location, values and academics that Butler offers is what excites him about taking on the role.

“I just felt like for me this was the next step and right step and something that you know, I had hoped maybe would happen one day and then obviously was fortunate in April to get this job,” Parkinson said.

Along with Parkinson, Latrell Fleming will join the coaching staff as the program’s top assistant coach. Fleming and Parkinson have coached together for eight seasons, seven of which were at IUPUI. Parkinson finalized his coaching staff with the additions of Holly Hoopingarner and Kristin Wodrich as assistant coaches. All of Parkinson’s coaches either worked for him at IUPUI or played for him.

Butler’s decision to bring Parkinson in comes mostly based on his success with turning around a struggling program. When he took over the reins for the Jaguars prior to the 2010-11 season, IUPUI was coming off a three-win effort. In just his third season, the Jaguars earned 20 wins and would do so a total of eight times with Parkinson as head coach. Bulldog fans are hoping he can replicate the same success at Hinkle.

During his time at Butler so far, Parkinson has demonstrated a desire to change the team’s culture. Through team bonding activities off the court, he hopes to encourage team chemistry with a team full of new faces.

“This summer we did a lot of team building activities: coming to my house, we went to a Fever game, we went to Top Golf together,” Parkinson said. “What I found was we’ve got a group of kids that really are hungry to learn, [want] to get better and they’re genuinely good kids. So … the [team] culture piece, that part’s been great. Now it’s a matter of developing the habits on the court and making it consistent.”

A new culture is definitely necessary when you have eight newly added players and just seven returners.

Three first-years will be joining the team. Guards Jessica Carrothers, Chloe Jeffers and Jordan Meulemans are all making their collegiate debuts for the Bulldogs this season. Carrothers — from Crown Point, Ind. — led Crown Point High School to a 103-7 record and an IHSAA 4A State Championship title in her senior season. Delaware, Ohio native, Jeffers, averaged 22.7 points, 8.5 rebounds and 4.0 assists during her senior season at Delaware Hays High School. Meulemans is the all-time scoring leader in De Pere basketball history with 1,874 career points.

McLimore and Mortag both come from IUPUI where they played under Parkinson’s coaching staff for three and two seasons, respectively.

In the 2021-22 season, McLimore averaged 13 points per game for the Jaguars and earned a Second Team All-League selection at the conclusion of the regular season. In the same season, Mortag proved to be a clutch player. She hit a game-winner against Green Bay and sent Youngstown State into overtime with a 3-pointer at the buzzer. Parkinson spoke on the advantages of having both McLimore and Mortag make the move to Butler with him.

“…They know our system,” Parkinson said. “So that allows them to help the other players and they’re both really humbled, good people as well — I think that makes a difference.”

McLimore has played some of her best basketball against difficult competition. She put up 21 points against a tough Michigan team last season. She completed a memorable finish to her career at IUPUI when she scored a team-high 18 points in their NCAA tournament matchup against Oklahoma. McLimore appreciates how the returning players have embraced the transfers and recruits.

“The returners that stayed here are amazing,” McLimore said. “A lot of people — with the new coach coming in and bringing in different recruits — could be not very welcoming. But all the returners are super welcoming and nice and have done a great job of making us feel welcome to [Butler].”

Despite their difficult year last season, the seven Bulldogs that are returning hope to lead this new team positively.

Senior guard Tenley Dowell played in all 28 games and started 21 for Butler last season after returning from a season-ending ACL injury from the year before. She averaged 6.5 points while also collecting 5.1 rebounds per game. Her presence on the boards has been noticed, as she led Butler in rebounding eleven times. She hopes to adjust to the Bulldog’s new system quickly so she can be an effective leader.

“I just plan to be just very hardworking and a positive leader on the court … I don’t know exactly everything that we do just because it’s all new and so [I just] try to learn it as fast as I can and be an encourager for everyone else if they don’t know,” Dowell said.

Other significant returners include sophomore guard Trinity White, sophomore forward Sydney Jaynes and junior guard Kendall Wingler, who all played in over 20 games last season for the Bulldogs.

White made 16 starts and played in 23 games as a first-year where she averaged 7.5 points and 3.6 rebounds per game. Her starting position could be up in the air due to the new additions, but White’s impact this season will be necessary for Butler.

The team has a non-conference slate of nine games which will test the Bulldogs early in the season. Parkinson, McLimore and Mortag will have the opportunity to face off against their former team on Nov. 13 at Hinkle Fieldhouse when Butler takes on IUPUI.

Out of all the non-conference games, one stands out for Dowell.

“[Indiana],” Dowell said. “Last year, we didn’t get to play them. And then freshman year, I was out with my knee injury, so I didn’t play them then either. I haven’t played them all [three] years, so I’m looking forward to that.”

The Bulldogs will square off against the Hoosiers on Wednesday, Dec. 21 in Bloomington to end non-conference play. Indiana — picked to finish second amongst the Big Ten — will be notable competition for the Bulldogs.

The Bulldogs will play their final regular season game on Feb. 27 at Creighton before entering the Big East Tournament on March 3.