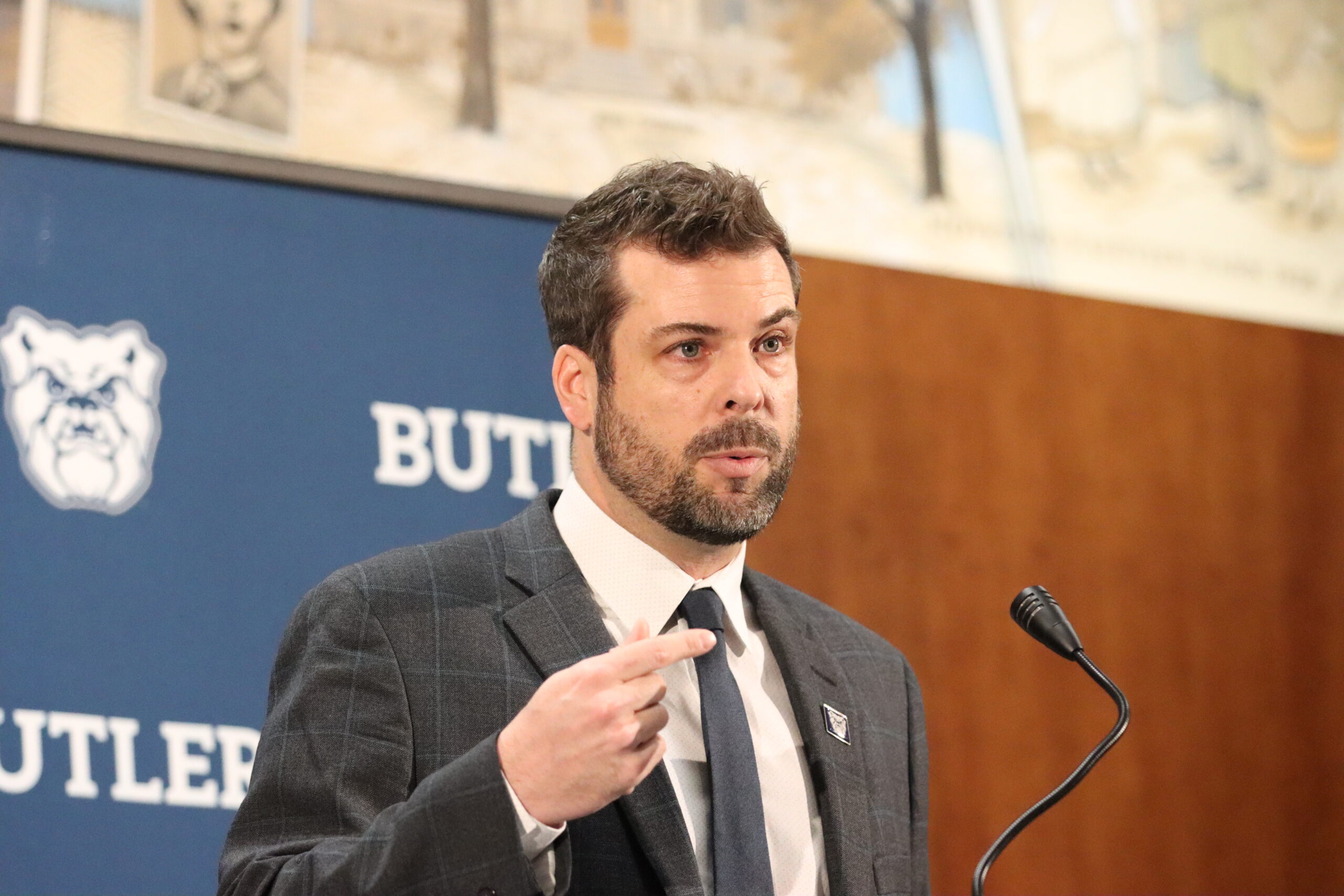 Austin Parkinson addressing the media during a press conference at Hinkle Fieldhouse on April 12. Parkinson was the women’s basketball head coach at IUPUI for 12 years prior to taking over the head coaching position at Butler. Photo by Francie Wilson.

As a native of Indiana, he’s no stranger to what basketball means to the Hoosier state, and what the sport means to Butler. He remembers coming to Hinkle as a kid, and the feeling he got when he re-entered this time around.

“So this is basketball heaven,” Parkinson said. “This is something I couldn’t [have imagined] even beyond my wildest dreams…”

While at IUPUI, Parkinson was quickly able to turn around a struggling program into a consistent contender for conference championships and NCAA tournament bids. Inheriting a team that won only three games the previous season, Parkinson needed just three seasons to win 20 games — a feat he would achieve eight times while coaching the Jaguars.

While thanking all of the people who helped him get to his current position today, Parkinson teared up when he arrived on the topic of his players.

“I want to thank my players at IUPUI,” Parkinson said. “When I took over, they had three wins. And, you know, we overcame a lot to create a consistent program that was winning 20 games a year and going to the NCAA tournament two out of the last three. That doesn’t happen without people who are determined, who are [of] high character and [who] believed in our vision. And so I’ll always be grateful to them because there’s no way I’m standing here today without them.”

Aside from team success, Parkinson has also been able to help his players find success individually. Macee Williams, a center from Parkinson’s most recent team at IUPUI, was drafted 32nd overall to the Phoenix Mercury in the 2022 WNBA Draft. Parkinson praised Williams for being able to take her talents to the next level and cited how it was “a dream come true” for her and her family.

Understanding how important having the right players on his roster is, Parkinson detailed the kind of players that he is looking to recruit to Butler — talented players with good character that love basketball. While explaining this more in detail, Parkinson mentioned his five-year-old daughter, Wren, and the example that he wants his players to set for her.

“I got a young lady right here that I’m gonna be bringing to practice several times a week,” Parkinson said. “I want [her] to be able to look up to those young ladies and emulate what they do.”

Parkinson has some work to do of course, as the program has had a combined four wins in the last season and has lost a few young players via transfer. With a competitive field of teams in the Big East, Parkinson is “looking forward to the challenge.”

Just like he did at IUPUI, Parkinson will start by building a staff and a team dedicated to wanting success not just for themselves, but for the team as a whole.

“You can’t skip steps to success,” Parkinson said. “You’ve got to be able to put in the work, you got to focus on the process and really buy into, hey, there’s nothing bigger than the team.”