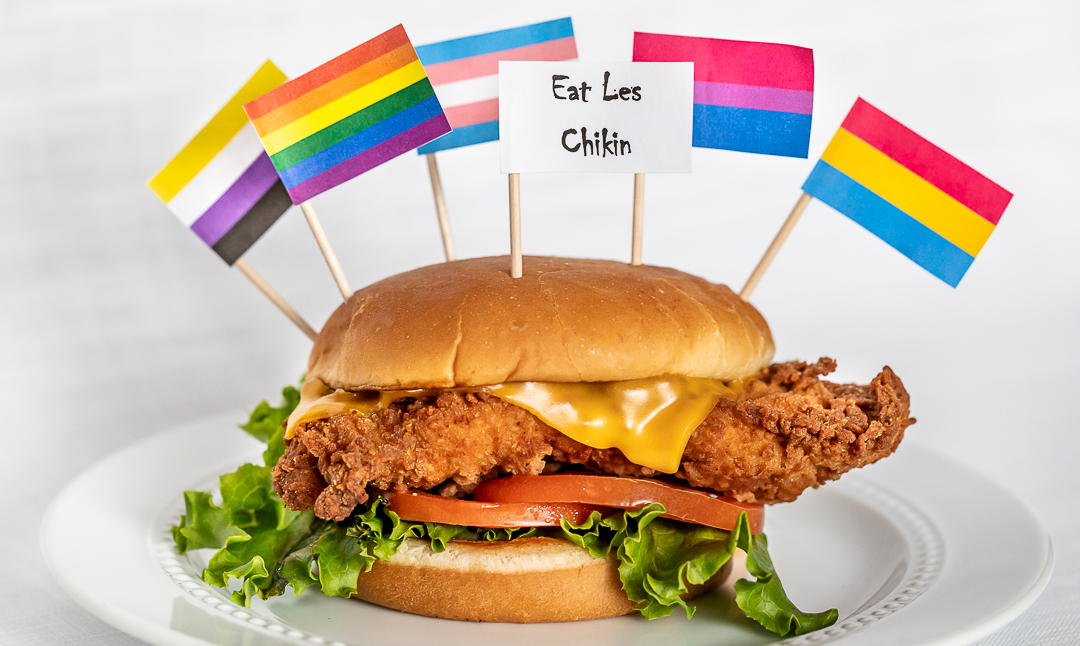 The global fast food chain Chick-fil-A has had a plethora of controversies surrounding its owners’ anti-LGBT inclinations. From its donations to organizations that support trauma-inducing conversion therapy, to the chairman’s homophobic comments on same-sex marriage, to funding the National Christian Charitable Foundation — which is actively campaigning against the Equality Act — Chick-fil-A is far from unproblematic.

Butler has had a partnership with the Chick-fil-A franchise in Broad Ripple for several years that allows the company to sell food at some sporting events. I’m not an avid sports fan — I’ve only been in Hinkle once during my brief tenure at Butler — so I was not aware of the extent of the corporation’s presence on campus. Prior to this, I had only seen Phi Delta Theta participating in fundraisers with Chick-fil-A, which was upsetting, but they are not an entity of the university — and it’s a Greek life organization, so I expect a certain degree of homophobia.

Kay Hyman, a junior theater and creative writing double major, was more cognizant of these issues than I and wrote a letter to the editor last semester questioning Chick-fil-A’s presence on campus, after seeing the Chick-fil-A logo advertised at basketball games.

“I just found it really frustrating,” Hyman said. “I went to all the basketball games and … [Chick-fil-A] was super advertised. They would blow up the Chick-fil-A name up on the little screens in the center.”

There’s a disconnect when you’re cheering for your university, while the symbol of a blatantly anti-LGBTQ+ organization that your university has partnered with looms above you.

Hyman also expressed their confusion over the university’s decision to partner with Chick-fil-A.

“I think it’s kind of weird for a university to be sponsoring a company that has this very bad … very homophobic sort of history,” Hyman said. “Surely there’s some other restaurants that we could partner with that [aren’t] so openly hateful.”

The presence of corporations on campus, in general, is a separate issue that will doubtlessly face my wrath at some point. But, if we must have corporate partnerships at Butler, the university should not have chosen one of the most hateful.

Mark Apple, the director of strategic communication at Butler University, offered an answer to this query — in lieu of an interview — with an emailed statement regarding Chick-fil-A’s presence on campus.

“The University remains committed to our values of diversity, equity and inclusion and is aware of the varying perspectives and concerns regarding Chick-fil-A being offered at select athletics events,” Apple said. “Our partnership — which is with a local store owner and does not involve the Chick-fil-A corporate office — does not indicate agreement with this or any other corporate office’s perspectives, nor does it change our unwavering efforts to advance DEI and support the entire campus community.”

According to Apple, Butler is aware of Chick-fil-A’s values and continues to support them. Our university has disregarded its LGBTQ+ students for money.

And I don’t know much about business — I’m an unemployable humanities major — but a simple Google search told me that 15% of sales and 50% of any profit made by a Chick-fil-A franchise goes up the corporate chain. Just because Butler is partnering with a specific franchise doesn’t mean the corporate office isn’t seeing a benefit.

Even if Butler does not explicitly endorse Chick-fil-A’s values, the university’s willingness to partner with a corporation known to be as hateful as Chick-fil-A is incredibly hypocritical, given Butler’s stated commitment to DEI.

Diana Fernandez Caumol, a sophomore psychology and art and design double major, is the public relations chair for Butler Alliance and feels Butler has not been successful in its commitment to DEI.

“Butler claims that it’s inclusive, and over and over again, I’ve seen that that is … performative,” Fernandez Caumol said. “You come to college hoping to start your life, and for your college to be affiliated with a company that has done so much damage to your community, I feel like it goes against [Butler’s] own values.”

Athletic events aren’t even the only time that Butler works with Chick-fil-A. On Aug. 29, the Chick-fil-A in Broad Ripple invited Butler students to swing by for free chicken nuggets with a special guest: Butler Blue IV.

“Blue is pretty much the face of Butler,” Fernandez Caumol said.“To associate [Blue with Chick-fil-A], it’s almost giving a message not only to the Butler community but to the world of who we are as Butler.”

In addition to the university’s partnership with Chick-fil-A, Butler has proven in recent weeks that its DEI values are performative at best, after repeatedly violating the Americans with Disabilities Act despite student outcries. So tell me, has the university really succeeded in upholding its stated values of diversity, equity and inclusion?

I don’t think Butler is homophobic. The majority of the students, faculty and staff that I have interacted with on this campus have been accepting and kind. However, I do think Butler’s administration cares more about money and “advancement,” than it does about its LGBTQ+ students.

Butler claims that it was founded on principles of diversity, equity and inclusion to create a welcoming environment for all students. It is well past time to put those foundational principles into practice. If you have even a single friend in the LGBTQ+ community or care about LGBTQ+ rights whatsoever, you need to register our distaste with this bigoted chicken with the university. You need to protest Chick-fil-A’s presence wherever it is found on campus. Our administration’s hypocrisy and hollow commitments to student belonging need to be challenged. Do better, Butler.