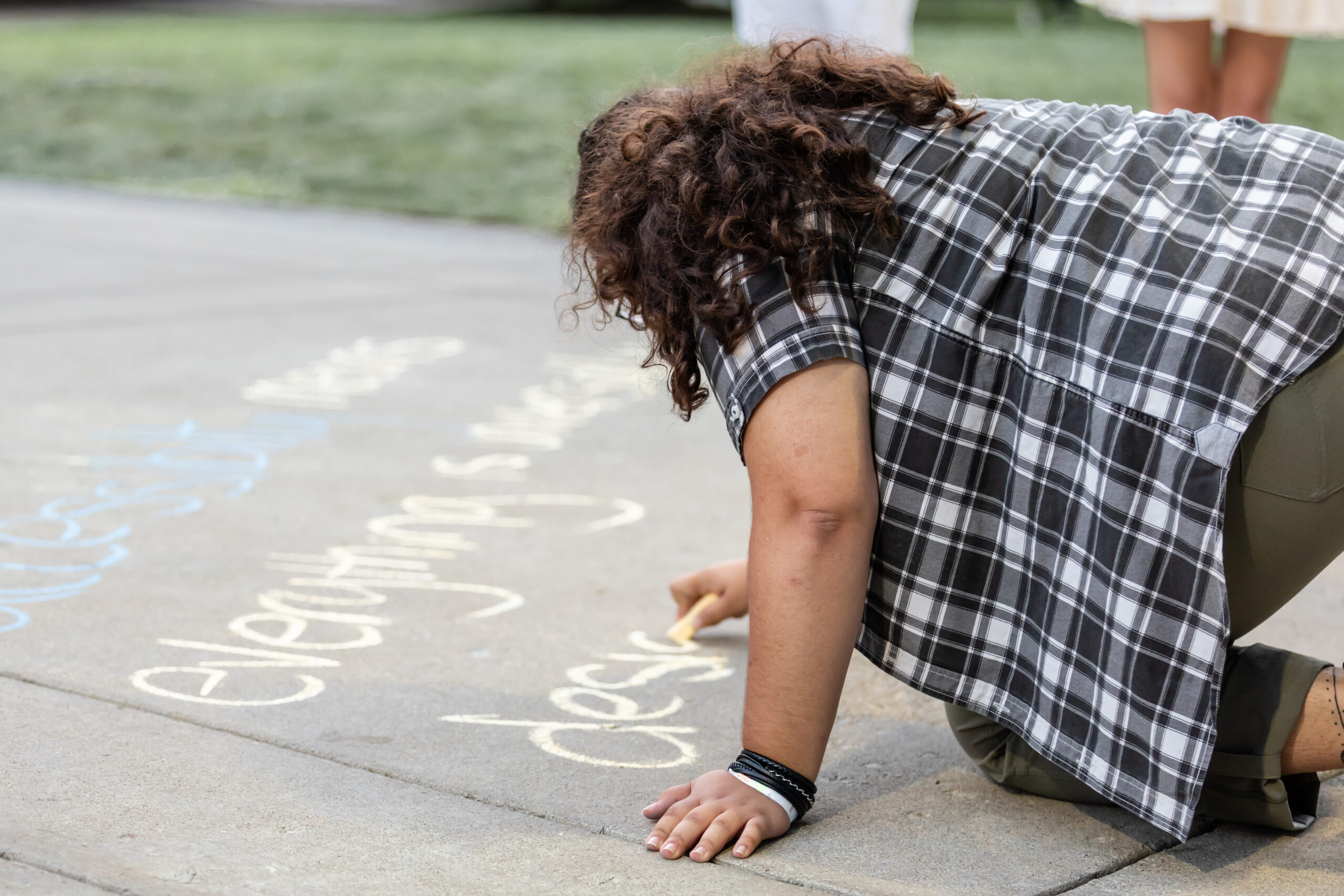 Bulldogs for Universal Design chalk the streets of Butler’s campus, hoping for a change. Photo by Lauren Hough.

Bulldogs for Universal Design, heretofore referred to as BUD, is a disabled student union that advocates for accessibility being the norm rather than the exception. Their main points of concentration are education, allyship and advocacy, and they have spearheaded such initiatives as Student Government Association’s Senate Resolution 2122-069, which promised that SGA would work alongside BUD to increase accessibility on campus.

Allison McElroy is a sophomore secondary education major and works as BUD’s public relations chair. McElroy has a disability, called proximal femoral focal deficiency or P50, which disproportionately shortened both of her femurs and has created a need for her to use a prosthetic leg in order to walk.

Understandably, this influenced McElroy’s college search. Not only did she have to look for a school with palatable dining services, a strong program for her major and a challenging enough course load to recognize all of her brilliance, but she also had to consider the campus’s size, walkability and overall accessibility.

“Starting out at Butler, that is definitely something I was considering … [such as] how big is the campus, how much walking will I have to do … things like that,” McElroy said.

McElroy was, and generally has since been, very impressed with Butler’s accessibility within those criteria. However, recent instances of university vehicles parking in accessible parking spots and on ramps have sparked a conversation about how much Butler truly cares about its students with disabilities.

The first publicly identified Americans with Disabilities Act (ADA) violation by Butler staff happened on Aug. 4 when University Operations vehicles were photographed parked in accessible parking spots, therefore prohibiting their use by anyone who has an accessible parking pass. Soon after, BUD officers spoke with John Lacheta, the Butler operations administration manager, and he apologized.

This incident was initially brought to light by BUD’s president and co-founder, Becca Mattson, who is a junior music education major. Mattson identifies with multiple disabilities, both visible and invisible — she is hard of hearing, hemiplegic and has chronic illnesses and post-traumatic stress disorder. Mattson also started using a wheelchair soon after becoming a student at Butler in August of 2020.

Mattson’s passion for advocacy was yet again tested when a second ADA violation by University Operations stared her in the face — literally.

Mattson was picking up supplies from the Diversity Center for BUD’s Block Party booth during the height of Welcome Week activities on Sunday, Aug. 21 when she saw that her path down the only ramp in Atherton Union had been blocked by a University Operations truck. She informed the workers of the issue, and they moved to let her pass before returning to their previous spot. When Mattson informed them that this was not an acceptable solution and could create a problem for other students, the worker told her that they did not care. Mattson was shocked by this response.

“I don’t get that a lot from university employees,” Mattson said. “In fact, I think that’s the first time anyone’s ever said anything that direct … They’ve been kind to me as an individual. I was really angry. And I thought to myself, I have to walk away from this because if I don’t, these parents are not going to like what they see.”

So Mattson left and made story posts detailing the violation on her personal Instagram with photos and a written description of the disrespect she had received. Understandably, her documentation of this encounter went viral, as several Butler students reposted the original statement — often with added captions elaborating on their outrage against the university.

The response to this second instance sparked a public statement from the university, as stated in a pathetic, four-sentence Instagram story post promising to “improve our University as we move forward together.” Now I for one was not super impressed with this response, but both Mattson and McElroy — very graciously — spoke highly of the university for acknowledging their frustrations and publicly speaking out despite the lack of translation to actions.

“The university had a statement,” Mattson said. “It was nice to see that they recognized what was happening and that they cared about it. But at the same time, it’s happened multiple times.”

Regardless of their kindness towards the university’s supremely verbose apology, BUD had already long-since decided on an event to chalk the doorways of Butler University as either accessible or inaccessible as well as write quotes about what accessibility means to students throughout popular sidewalks on campus. This event was to bring light to the reality of Butler’s inaccessibility and set the tone for their upcoming year of hard work advocating for students with disabilities.

Unfortunately, this event also brought to light something far less encouraging. You guessed it! — yet another University Operations vehicle parked on an accessible feature. This third instance included a curb cut on South Campus, a change in scenery that feels ironically diverse.

Keep in mind that this happened less than 48 hours after Butler University publicly promised to support and aid the students that they then disregarded and disrespected.

Lacheta has been the contact person for all of BUD’s interactions with the university during these violations.

In an email interview to me, Lacheta stated that he has communicated the concerns of students to his departments and believes that his staff will do better in the future. He also verified that University Operations employees were addressed individually, departmentally and in departmentally designated groups through appropriate channels. And, despite my admittedly aggressive line of questioning, he was willing to offer insight into the roadblocks that prevent these continued issues from being solved.

“There are challenges in educating our Operations Team about accessibility on campus,” Lacheta said in an email. “Some of those challenges include turnover in personnel, and language and cultural barriers. We will never be perfect because people make mistakes. But I believe that everyone has good intentions, and we are committed to doing better each day.”

Don’t get me wrong, I want to believe that everything will be okay. I can even go so far as to appreciate that he is willing to list the actions taken to ensure that his staff understands the severity of this problem.

But as well-intentioned as these communications may be, they did not create department-wide change after previous incidents. That is extremely discouraging, given that they are the only consequence for the Butler staff members who have committed serious violations towards Butler students.

No one is asking for perfection. They are just asking for a major campus entity to stop actively blocking the few accessibility features on campus.

And yet, despite all of this, BUD executives like McElroy and Mattson continue to advocate with grace, respect and wholehearted compassion. Both McElroy and Mattson were genuinely thankful for the university’s acknowledgment of their wrongdoings, and Mattson in particular expressed her appreciation of Lacheta’s willingness to converse alongside BUD. As a full-time hater, this truly baffles me. But McElroy explained to me that responding with anger is too frequently counterproductive.

“I know that [advocating and calling people out] in a way that tries to be gracious with them is what’s going to really make the most impact,”  McElroy said.

So, after all of this, we are left with a burning question: how can we help?

The easiest advice is to simply not block or misuse accessible features — on or off campus. It is illegal for someone without an accessibility pass to use an accessible spot or to restrict the use of accessible features, even just for a moment, with the maximum fine for a first-time violator being $75,000. More importantly, it is morally deplorable.

Additionally, if you see someone else impeding accessible features, it is up to you to say something. You can very kindly explain the situation and give them a chance to make things right, but, unfortunately, you also have to be prepared to document and distribute evidence of incidents where people do not care — even if it’s uncomfortable.

Finally, you must listen to and uplift the voice and causes of individuals and organizations that care about accessibility and accountability. Importantly, if you do not identify with a disability, it is not your place to decide what the next steps are in situations like these, but it is absolutely your responsibility to support those whose place it is.

I know these conversations may be difficult, awkward or just plain out of character, but avoidance is a luxury that we cannot afford to exercise. The individuals affected by the negligence and disregard of our university are our friends, our classmates and our neighbors, sure, but they are first and foremost human beings who are merely asking to be treated as such.

To bring us home after quite a lengthy read, I offer you the immortal words of advocate, local celebrity and friend to all, Becca Mattson:

“Ability is a part of diversity, and, if we are an institution that values equity and diversity, we must value ability as a part of that.”