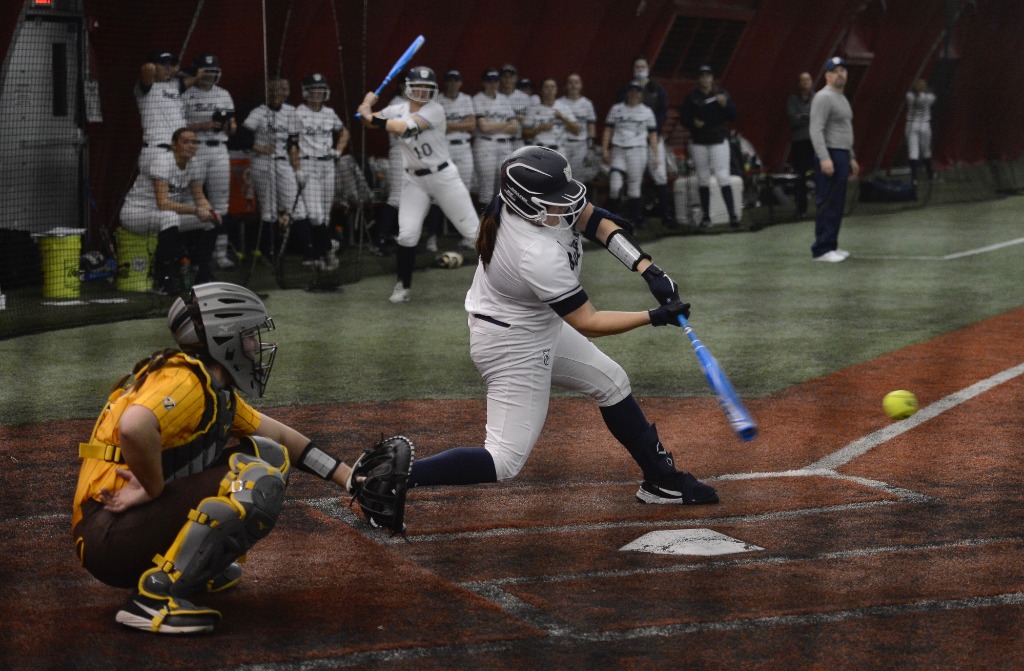 Senior catcher Gracie Voulgaris swings during an at-bat in a matchup against the Valparaiso Beacons on Feb. 10 during the DePaul Dome tournament. The softball team currently sits in second place in the Big East behind UConn. Photo courtesy of John Fetcho.

The track team kicked off their outdoor season in Oxford, Ohio with the Blizzard Buster. The men’s team collected several podiums over the course of the meet. Sophomore Zac Stanley won the 400 meter dash and the 200 meter dash. Sophomore Drew Herman finished first in the high jump with a height of 1.95 meters. In the 1500 meter race, Liam Dennis and Trey Harris finished first and second at 3.56.41 and 3.58.04, respectively.

The women’s track team was highlighted by Morgan Walsh and Lexi Affolter, who also finished in the top spots of the 1500 meter with times of 4.42.92 and 4.43.83, respectively.

The men’s tennis team scored their first Big East over the Georgetown Hoyas on Saturday with a score of 4-3. The match started off rough as the Bulldogs failed to secure a win in the doubles matchups, but they turned it around in the singles competition.

In the opening game of the Big East series, the Butler softball team took down the DePaul Blue Demons 6-5. The Bulldogs were down 4-2 at the top of the sixth, until Mackenzie Germain kicked the inning off with a homerun. With bases loaded in the same inning, Lauren Fey poked one to left field earning a three-run RBI and the win.

The baseball team took a hard loss to Eastern Michigan losing 15-4 in the first of a three-game series. The Bulldogs were in a four-run deficit to Eastern Michigan until the bottom of the seventh inning, where graduate student James Gargano hit a three-run RBI double bringing the score to 5-4. Unfortunately for the Bulldogs, the Eagles scored 10 runs in the last two innings of the game to secure the victory.

The baseball team played their second and third game of the series against Eastern Michigan and split the double header on Sunday.

The Bulldogs came out strong in the first game, winning 4-3 off the bat of Junior Kollyn All — who drove in the go ahead run in the bottom of the eighth inning. In the final game of the series, however, Butler was never able to gain momentum and lost to the Eagles 7-0.

The softball team split with DePaul in their double header on Sunday. The Bulldogs lost 7-6 in the first game, but were able to take down the Blue Demons 4-3 in the second game.

In the second game of the day, the Bulldogs had no issue getting on base but struggled to score runs. In the sixth inning Butler led 3-0, but DePaul tied up the game to force extra innings. Luckily for the Bulldogs, Ella White hit a double and Bri Avery scored the run to take the game.

Michael Dickson got the first point for Butler in the third position with a 6-2, 6-2 win. Thomas Brennan went 6-4, 6-3 in the top spot, while Alvaro Huete Vadillo swept in the No. 2 spot (6-4, 6-2). Patrick Joss was able to pick up the win in an intense three set match over Youngstown’s Will Everett.

The women’s golf team is tied for 10th place out of 15 teams after Monday’s play. The Bulldogs shot 314 in the morning and followed that with a 321 (+33) in the afternoon.

Claire Edwards leads the Bulldogs in the Nevel Meade Collegiate Prospect, as of Monday she is tied for ninth out of 90 entries. In round one, Edwards shot 73 (+1) and she finished out the day with an 80 in the second round.

The women’s golf team wrapped up their tournament in Prospect, Kentucky and earned 10th place overall. As a team they finished 864 (+88) throughout the tournament. Claire Edwards secured eighth on the leaderboard and Ally Ross finished in the 11th position out of 90 players.

The baseball team fell 13-3 in a trip down to Knoxville, Tennessee to face the No. 5 ranked Tennessee Volunteers.

The Vols came out swinging, putting up six runs in the first inning alone. Butler would get a run of their own off of right fielder Scott Jones’ solo homerun in the second inning. The Vols continued to add to their lead in the third inning with a three-run home run by Cortland Lawson.

The Vols ran away with the contest and prevented any comeback attempt by the Bulldogs. The team now sits two games below .500 at 9-11 overall.