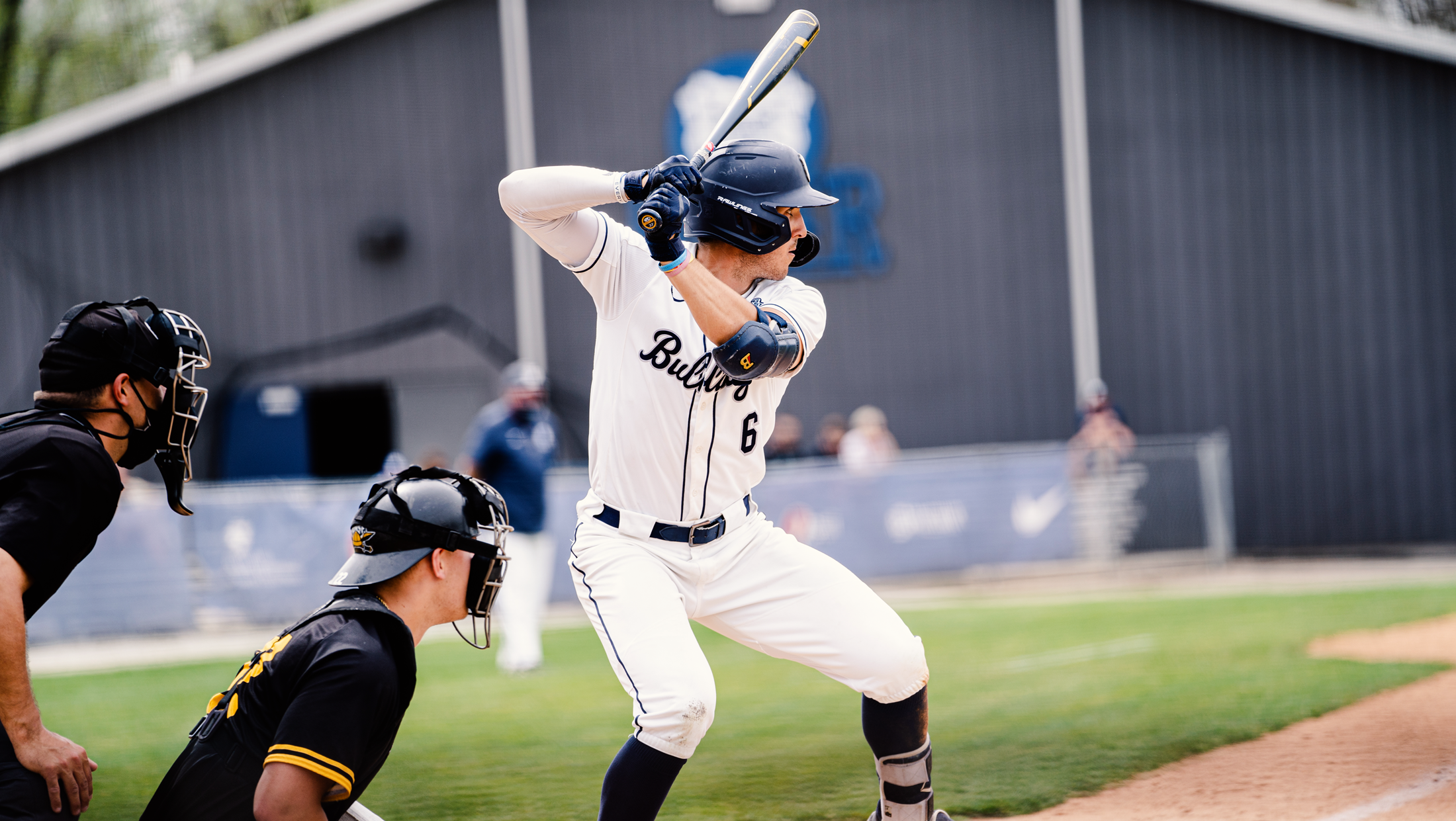 Outfielder James Gargano during an at-bat against the Northern Kentucky Norse on May 2, 2021. Gargano hit a three-run RBI double against Eastern Michigan on Sunday to help the Bulldogs complete a 4-3 comeback in their first game of their doubleheader against the Eagles. Photo courtesy of Butler Athletics.

The Butler baseball team had a difficult week on the diamond, as they fell to Big Ten opponent the University of Illinois Urbana-Champaign on March 15 and sputtered in a three-game series against the Eastern Michigan Eagles over the weekend — winning only one contest.

Butler traveled to Champaign, Ill. Tuesday to face off against the 5-8 overall Fighting Illini.

Illinois struck early and often against the Dawgs — scoring seven runs in the first two innings to put Butler on the ropes early. Butler scored for the first time in the sixth inning from Travis Holt’s second home run on the year a day after hitting his first on the season against Western Illinois.

Illinois responded in the bottom half of the inning with third baseman Brandon Comia’s three-run homer to give Illinois a 10-1 cushion. Butler would chip away at the lead with a pair of home runs from Junior Jonathan Shoop and first baseman Lucas Galdoni.

The final score of this matchup was 13-4 and dropped Butler to 8-8 before their home series against Eastern Michigan.

After a downpour at Bulldog park on Friday, the series turned into a single game on Saturday and a doubleheader on Sunday between the Bulldogs and the Eagles.

In their first contest Eastern Michigan scored a pair of runs in the top of the second inning, but Butler threatened to tie the game after Junior Ryan O’Halloran had a 10-pitch battle with Zach Fruit that resulted in an RBI-single. Center fielder Brady Huebbe threw out Scott Jones on the play to keep it at a one-run lead for the Eagles.

In the top of the fifth the Eagles tacked on two more runs after executing some small ball to set up the two runs. A couple of innings later, the MAC home run leader Gabe Denton added another one to his lead in the top of the seventh to make it a 5-1 game.

In the bottom of the seventh inning, Butler was able to work the bases loaded for left fielder James Gargano. Gargano hit a double into the left field gap to clear the bases and put the Dawgs within one of Eastern Michigan.

In the eighth and ninth innings, the Eagles pulled away after some costly mistakes by Butler. Eastern Michigan sent up 18 hitters and scored five runs in each inning to make it an 11 run lead, and cilitfied a 15-4 victory for the Eagles.

Jon Vore came in for relief and threw three scoreless frames and allowed only two hits — giving Vore his third win of the season.

Redshirt junior Zach Gallig went the next five innings and only allowed one earned run, striking out four and walked no Butler hitters.

Through seven and half innings the score was locked at three. With two outs and a runner on third, catcher Kollyn All hit a RBI-single into left field to give Butler a 4-3 lead going into the ninth.

Closer Derek Drees came in and struck out two of the three hitters and brought the Dawgs back up to .500 at 9-9 overall.

The rubber match did not go well for Butler, as they dropped the game and series after the Eagles won 7-0 behind four Bulldog errors in the field.

The Bulldogs did not capitalize on their opportunities leaving 10 men on base. Butler was given seven walks and two hits by pitches — but the team only had two hits.

Eastern Michigan was led by their Junior relief pitcher Frankie Volkers. The right handed pitcher pitched the last four innings, giving up just one hit and one walk on his way to his first save.

Third baseman Ryan O’Halloran had a good week for the Bulldogs. The transfer played in three games and went 6-11 with two RBI’s and a stolen base. He has improved his average to a .290 on the year.

Jon Vore has been lights out since his rough outing against Murray State. Since Feb. 26, Vore has thrown 15.2 innings and has only allowed two earned runs and struck out 12 hitters. In every game he has appeared in Butler has won. His ERA since the end of February has been 1.18.