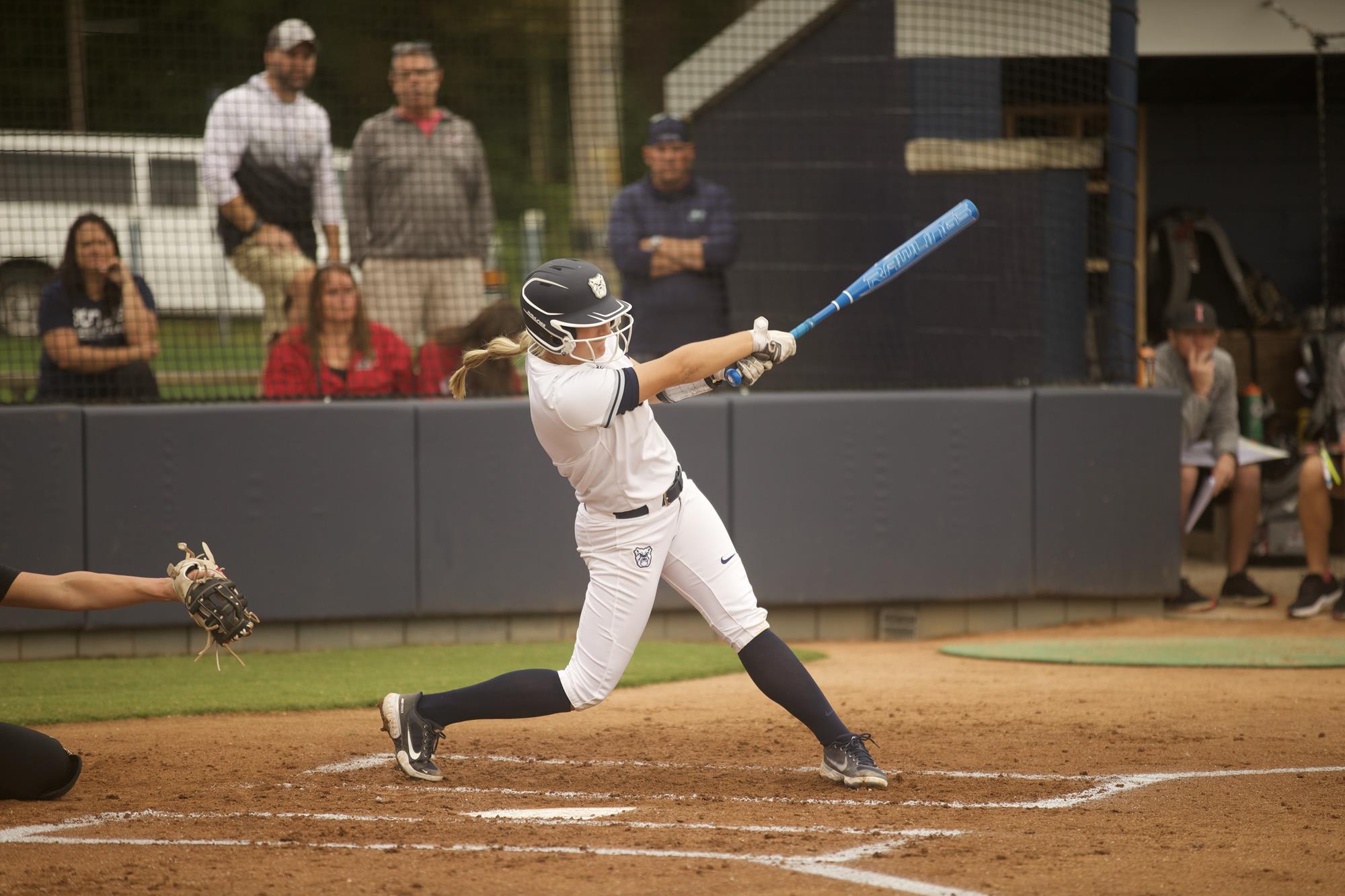 Freshman infielder Ella White swings during an at-bat earlier this season. White was the go ahead baserunner that gave the Bulldogs a 4-3 victory in extra innings over DePaul on March 20. Photo courtesy of Butler Athletics.

The Butler softball team finished out their longest road stand of the season by defeating DePaul twice in a three-game series in Chicago over the weekend. All three games were decided by one run in Butler’s most exciting stretch of games thus far.

To open the series, Butler took the first game 6-5 on Saturday, March 19. In a double header the next day, each team won one game with DePaul taking the first game 7-6 and the Bulldogs winning the tie breaker 4-3.

In the opening contest, Butler trailed 4-2 before exploding for four runs in the sixth inning to take a 6-4 lead. Junior Mackenzie Griman kicked off a comeback with a solo home run, which was followed by senior infielder who notched in a three-run RBI double to give the Bulldogs a lead they would never relinquish.

DePaul’s lone win in the series was highlighted by a walk-off home run from freshman pinch hitter Baylee Cosgrove in the final inning. The hit was Cosgrove’s first career home run.

Despite the loss, the Bulldogs had 12 hits in the second game led by Fey’s three hits on four at-bats. Sophomore outfielder Monique Hoosen had a tremendous offensive game for Butler, going two-for-three with one home run, giving her two RBIs as well.

The final game between the two Big East foes was decided in extra innings. Butler led 3-0 heading into the bottom of the seventh inning before a two-run RBI single from graduate outfielder Kate Polucha and a single RBI from sophomore Nicole Sullivan tied the game up. Butler senior outfielder Bri Avery sent freshman Ella White in to score in the eighth inning on a sacrifice fly to win the game and the series.

Over the weekend, the Bulldogs compiled a total of 28 hits in three games against the Blue Demons, with seven of those belonging to Fey to lead the team in the series. Fey owned seven hits on the season prior to the series, giving her a total of 14 on the year.

The series moves Butler to 16-8 on the season and 4-1 in the Big East — just half a game behind UConn for first in the conference.

Butler will return to Indianapolis to face off against Seton Hall for the first time this season in a three-game series from Friday, March 25 to Sunday, March 27.