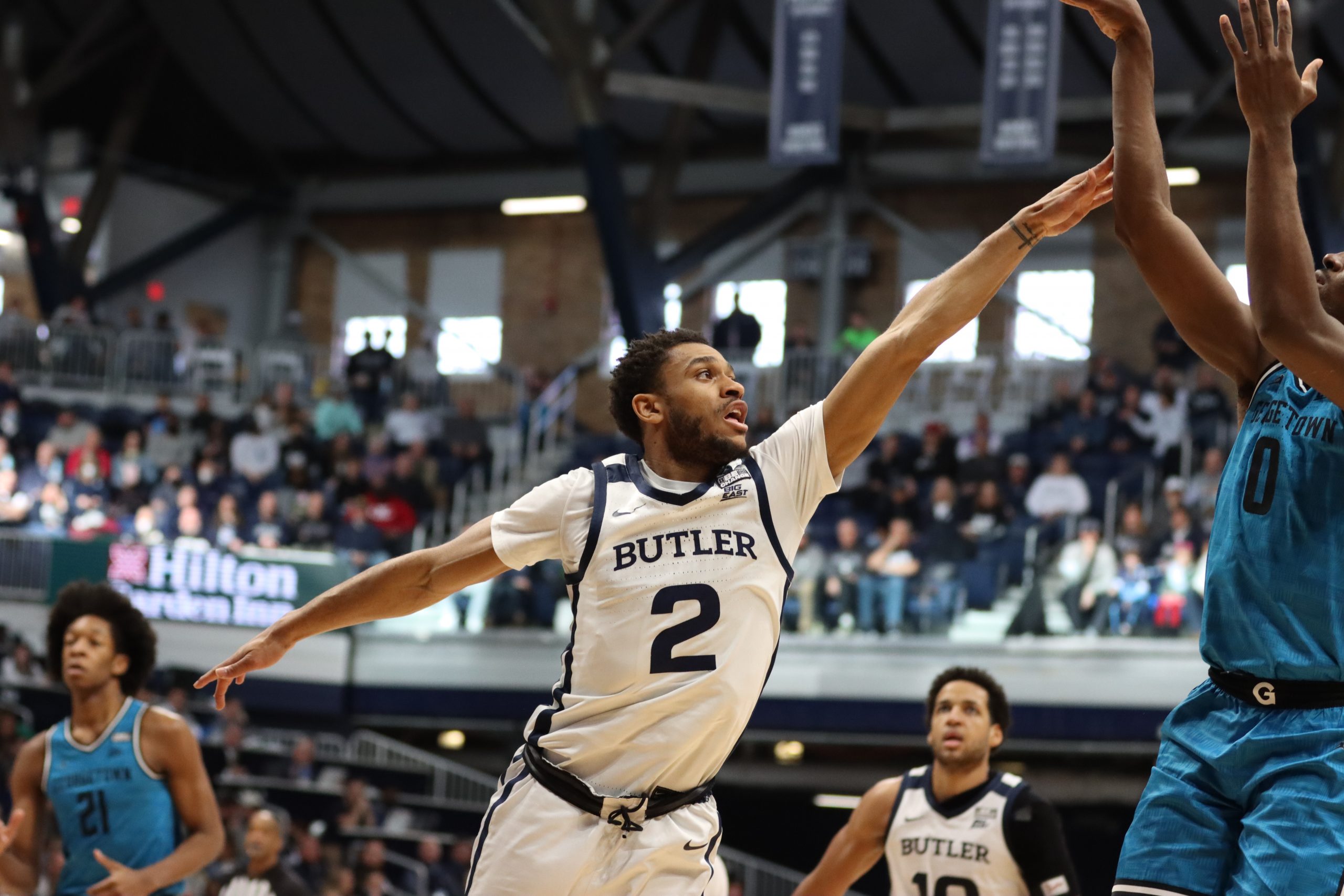 Riding a two-game winning streak, the Butler men’s basketball team is set to take on archrival Xavier in Cincinnati tonight. The Bulldogs lost the previous matchup in Hinkle 87-72 on Jan. 7, despite shooting 50% from the field.

The difference in the first game was the long ball — Butler shot just 23% and Xavier shot 45% from three. Xavier shot the ball well, but Butler’s defense was at fault, allowing too many open looks throughout the entire game. 87 points allowed is the most Butler has given up all season, and the Bulldogs could not do anything to stop Adam Kunkel, who torched Hinkle with 25 points including 18 points in the second half.

It was a performance to forget last month, but the Bulldogs have made changes and improvements since, playing much better in the last four games as a result. Butler will need to continue these trends and must improve shotmaking in order to come away with the road upset.

Here’s what you need to know ahead of the matchup with the Musketeers.

Who: Butler at Xavier

Back to the Butler Way

For years, the staple of Butler basketball was the defense. This season, that idea has gone by the wayside in more games than not, and the team’s record has taken a fall because of it. In January, the Bulldogs lost six of its first seven games before defeating Creighton on Jan. 26. In each of those losses the Bulldogs gave up 69 or more points, and lost the rebounding battle in all seven matchups.

However, a lineup change prior to the Providence game has given this team new life. Head coach LaVall Jordan placed Bo Hodges and Chuck Harris into the starting lineup, and the team’s performances have been night and day. Against the Big East-leading Friars, the Bulldogs played well, trailing by four with just 90 seconds left on the road. Butler ultimately lost, but the improved play from Harris and Hodges were a sign of things to come.

In Butler’s last two games, both wins, Butler held Creighton to 55 points and Georgetown to 53. In those games, Butler’s defense stepped up big time, holding the Bluejays and Hoyas to a combined 36% from the field and 6-of-41 from 3-point land. Thanks in large part to strong perimeter defense forcing missed shots, Butler outrebounded both teams, breaking a nine-game streak of losing the rebounding battle.

Harris’ underrated perimeter defense and Hodges’ athleticism and energy are crucial parts of this transformation, but they are not alone. Aaron Thompson, a well-known pest of a defender, has continued to draw offensive fouls left and right. Bryce Nze makes up for his lack of size with his basketball IQ, and recorded his first double-double of the season versus Georgetown. Big East Freshman of the Week Simas Lukosius has done his job defensively and cemented his place in the rotation.

This Butler team is obviously flawed — lacking shooting, size, and a go-to scorer like Kamar Baldwin or Kelan Martin to close out games. But, if the Bulldogs can continue the defensive effort shown in the last two games, the team will continue to climb the Big East standings and may have a chance to upset an elite Xavier team.

The year of Cincinnati?

The Musketeers are 15-5 on the season, ranked No. 21 in the latest AP poll, and barring a massive collapse, will be playing in the NCAA Tournament. Xavier can beat teams in a variety of ways — launching 3-pointers like they did against Butler, on the inside with Jack Nunge and Zach Freemantle or with excellent defense. It’s a very balanced team, and different guys give teams trouble with each game.

Against Butler, that player was Adam Kunkel. Kunkel scored 25 points in 26 minutes against Butler, 18 of which came in the second half. The Bulldogs gave Kunkel room to heat up at the beginning of the second half, and he never cooled down. Kunkel has not scored a point in Xavier’s last two games though, which could mean he’s due for another stellar performance.

What truly sealed Butler’s fate though was the inability to stop fouling Xavier. The Musketeers shot an absurd 25 free throws in the second half, a number far too high to overcome. The Bulldogs have been much improved in that department the past four games, and must continue to do so to keep a good free throw shooting team like Xavier from getting free points.

Ultimately, this will be a difficult game for Butler to win. The Bulldogs don’t have the firepower to keep up with Xavier if the Musketeers get hot, and Butler has lost three consecutive road games by an average of 22 points.

Despite being on a two-game winning streak, the Bulldogs’ backs are still against the wall. There is no better time than a road rivalry game to find out what this team is made of.