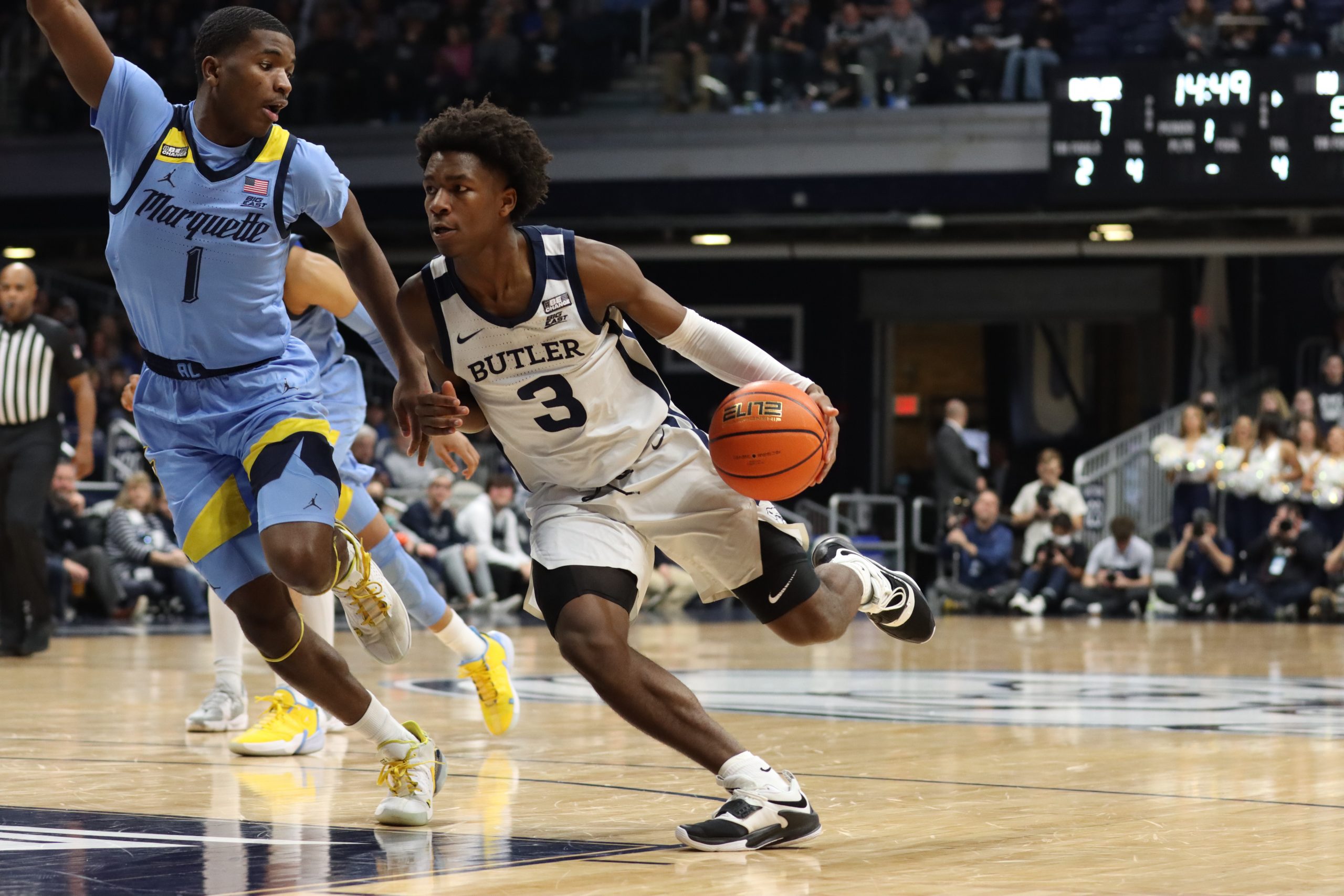 Chuck Harris drives to the basket early in Butler’s win over Marquette on Feb. 12. Harris finished the game with 15 points and tied a season-high with four 3-pointers. Photo by Francie Wilson.

After an upset win over No. 18 Marquette on Saturday, Feb. 12, the Butler men’s basketball team will look to keep the momentum going on the road tonight versus DePaul. Butler won the previous matchup against the Blue Demons in Hinkle on Dec. 29, 63-59, with Simas Lukosius pouring in 15 points.

The Bulldogs dominate the all-time series versus DePaul, and have only continued to widen the margin since joining the Big East. Butler is 15-2 since entering the conference in the 2013-2014 season, and 8-1 versus the Blue Demons under head coach LaVall Jordan. The last time DePaul won a game versus Butler was prior to the COVID-19 lockdowns.

Butler and DePaul currently sit ninth and 10th, respectively, in the conference, but both teams have been playing much better as of late. DePaul beat Xavier 10 days ago and just took current No. 8 Providence to overtime on the road, while Butler lost three games by a total of seven points before knocking out then-No. 18 Marquette.

With a win tonight, Butler has the chance to leapfrog St. John’s and sit just a half-game back of Seton Hall for seventh in the Big East standings.

Here’s what you need to know ahead of the game in the Windy City.

Who: Butler vs. DePaul

Since Jordan inserted Bo Hodges and Chuck Harris into the starting lineup full-time, the Bulldogs have played a much-improved brand of basketball, even if the results don’t always show it. Butler is 3-4 since the switch, with the four losses coming by a combined 14 points.

The recent three-game losing streak — to Xavier by two, St. John’s by three and Creighton by two — showed Butler has the chops to compete with the rest of the conference, but coming just short will haunt the team. If Butler played better in crunch time and those three results flipped in the Bulldogs’ direction, Butler would currently be fourth-place in the Big East and likely on the bubble for the NCAA Tournament.

However, when all hope looked lost with Shaka Smart’s Marquette coming to town, Butler refused to roll over and put together their best performance of the season. The threes were falling, the ball was moving and Butler played good defense for a large part of the game.

Coming off that big win, the focus now turns to maintaining that momentum in the last six regular season games ahead of the Big East tournament. Even though it’s on the road, tonight’s clash versus DePaul will likely be Butler’s easiest matchup the rest of the way, so picking up a win in Chicago is crucial.

DePaul’s only chance at March Madness is winning the Big East tournament, but that does not mean their season is over. The Blue Demons lost nine of their first 10 conference games — the lone win coming in a 96-92 shootout against Seton Hall — but have been much improved in the past three.

After losing to UConn by seven after leading at halftime, DePaul rattled off a two-game win streak over Xavier on the road and Georgetown at home. Beating Georgetown — who hasn’t won a game in conference play this season — is not the most impressive feat, but a road win over Xavier is significant.

The win is especially notable because DePaul did not play particularly well. The Blue Demons shot poorly from behind the arc, committed more turnovers and had fewer assists. However, Courvoisier McCauley had himself a game with 21 points on 8-12 shooting and 4-8 from beyond the arc, while the rest of the team went just 1-14 from deep. With just one player shooting the ball well, DePaul was still able to beat a ranked team on the road.

Arguably DePaul’s best performance was in a loss to Providence on Saturday, Feb. 12. DePaul led for nearly the entire game and were up by as many as 13 points in the second half, but the current No. 8 team in the country came all the way back to send the game to overtime. DePaul was down by just a point with 18 seconds left before Providence hit their two free throws, but the Friars did not allow the Blue Demons to shoot a 3-pointer, instead intentionally fouling and sending them to the free throw line. DePaul ultimately lost by three, but proved they must be taken seriously in the Big East.

Kenpom has DePaul ranked 22 spots higher than Butler, and ESPN’s Basketball Power Index gives the Blue Demons a 79.9% chance to win on their home floor. Even in the Bulldogs’ easiest remaining matchup, the team still must adopt the underdog mentality.