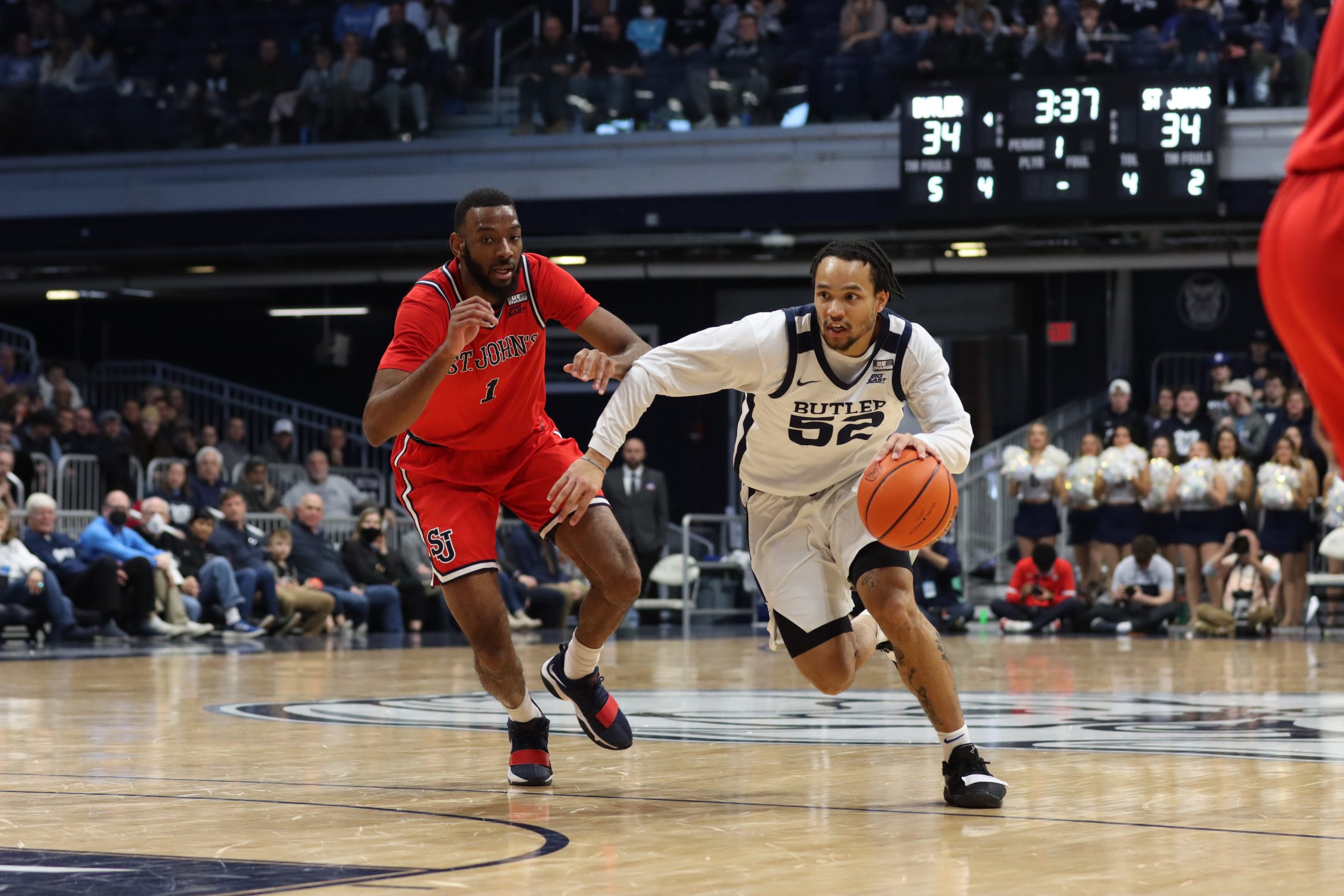 Jair Bolden drives to the hoop in Butler’s loss to St. John’s on Feb. 5. Bolden went six straight games without scoring a point but scored seven against the Red Storm in eleven minutes of action. Photo by Francie Wilson.

For the second consecutive game the Butler men’s basketball team fell just short of a win, losing to St. John’s 75-72 at Hinkle Fieldhouse. Bo Hodges led the way for Butler, scoring 22 points and grabbing seven rebounds. Bryce Nze added 14 points and three steals, and Julian Champagnie led the Red Storm with 21 points and eight rebounds. The Bulldogs drop to 11-12 on the season and 4-8 in the Big East.

Butler held a lead for over 27 minutes in the contest but could not keep St. John’s off the free throw at the end of the game. Chuck Harris tied the game at 66 with just under four minutes left, and St. John’s did not make a field goal for the rest of the contest, only attempting two. However, Butler sent St. John’s to the free throw line for 10 attempts in the final three minutes, and the Red Storm hit all but one. The Bulldogs still had a chance to tie the game at the buzzer, but Harris air-balled a contested three and St. John’s left Hinkle with a win.

Ultimately, this game came down to Butler struggling to defend the high-powered St. John’s offense and making too many mistakes on both sides of the floor. There are positives to take out of this loss, but it was a missed opportunity for Butler to move up the Big East standings.

Let’s go beyond the box score in the Bulldogs’ fifth loss at Hinkle.

A mostly positive day on offense

Overall, Butler shot 52% from the field and 36% from three which are well above the team’s averages this season. Butler got off to a hot start, hitting seven 3-pointers in the first half with five different Bulldogs sinking at least one. Butler averages seven 3-point makes a game, making the first half shooting display that much more impressive. However, the Bulldogs came back to reality in the second half, making just three of their 13 attempts from beyond the arc.

Scoring on the interior also worked, especially in the first half. Bryce Nze attempted the first four shots of the game and scored eight of the Bulldogs first 11 points. It was clear the Bulldogs saw a mismatch with Champagnie guarding Nze in the post, and Butler took advantage of it. Per usual, Aaron Thompson found a way to get a few buckets in the paint, as did Hodges. Butler outscored St. John’s in the paint 32-30, a rare sighting for a team that typically lacks a strong interior presence.

While Butler shot the ball well, the team only attempted five free throws which proved to be a vital component of the game. Credit to St. John’s for staying disciplined and only racking up a total of 10 fouls, but the Bulldogs need to improve at drawing and selling contact to get free points at the line. This is the third time since the Villanova game that Butler attempted six or fewer free throws, and the Bulldogs have lost all three. A few more drawn fouls and made free throws would have been the difference between a close loss and a close win.

While Butler only attempted five free throws, the Red Storm attempted 25, including 10 in the final three minutes. St. John’s converted three and-one’s in the first half alone on bad Bulldog contests and drew 12 fouls in the second half. Regardless of the reason for fouling so much — and no, the refs weren’t biased — it is difficult to win when sending the opponent to the line so much. Instead of forcing the Red Storm to make tough, clutch shots in the final four minutes, Butler played sloppy defense and gave St. John’s much easier looks at the line.

Butler’s interior defense was not good either. St. John’s made four dunks and nine layups, making it look easy to score on and around Butler’s bigs. Nze did have a big block towards the end of the game, but that was the only one of the game. The rebounding battle was essentially even, but the Bulldogs did lose it by two, breaking the team’s three-game streak of outrebounding their opponents. Butler is now 3-10 when losing the rebounding battle, compared to 8-1 when winning it.

Butler did play well on the interior however. For the fourth straight game, the Bulldogs held opponents to under 21% from beyond the arc, holding St. John’s to just 2-16 from deep. The Red Storm did have some open looks they missed, but four consecutive games of holding opponents to abysmal percentages from three shows that Butler is doing something right.

The Bulldogs next game is on Tuesday, Feb. 8 on the road at Creighton. Then, the Bulldogs will be back at Hinkle for a matchup with current AP No. 24 Marquette on Feb. 12. Then, Butler will be on the road for four of their next five games, before ending the regular season at home against Villanova.