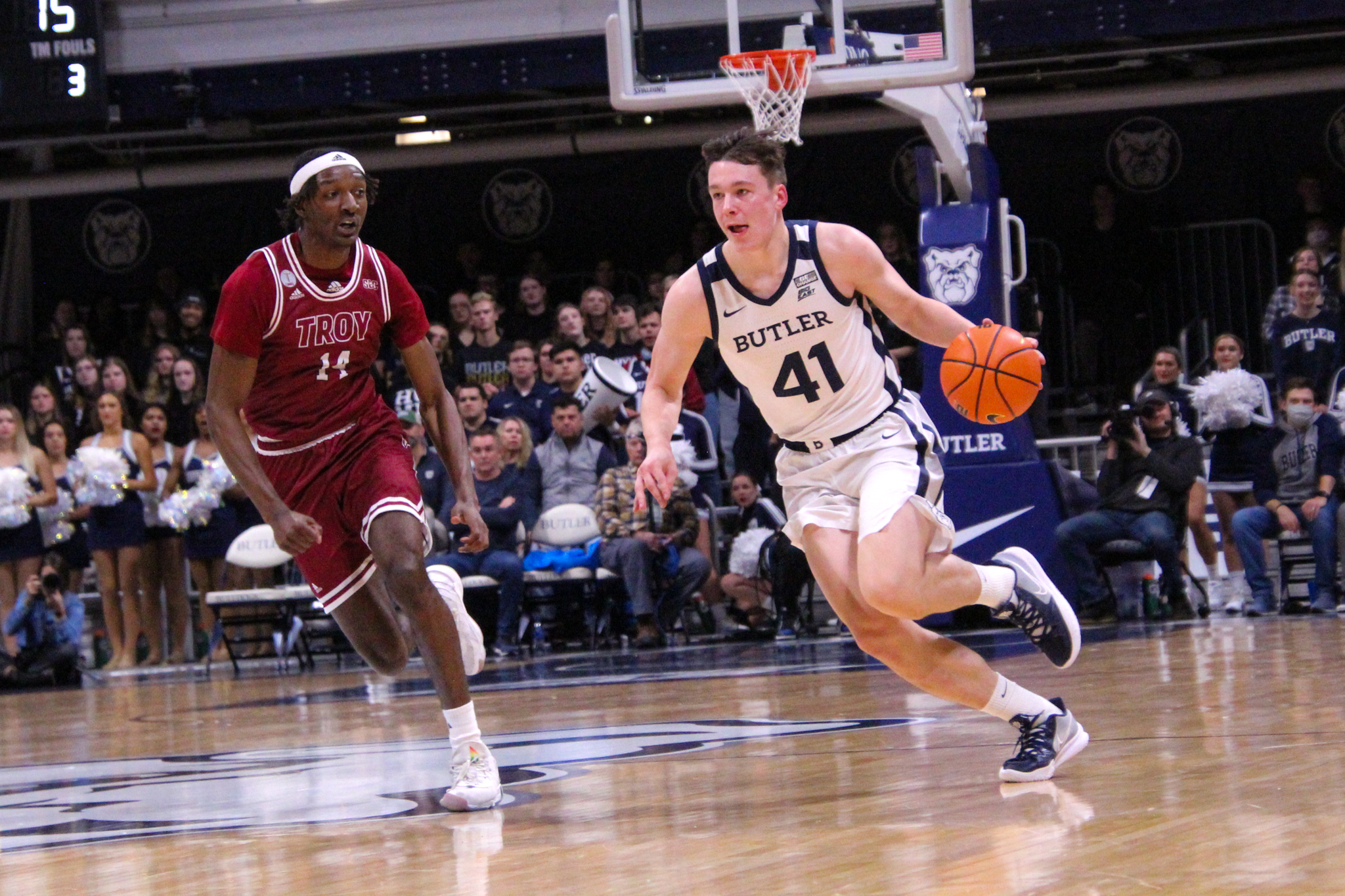 Freshman guard Simas Lukosius dribbles the ball up court in a matchup against Troy on Nov. 13. Lukosius boasted a season-high 15 points in a victory against the DePaul Blue Demons on Dec. 29. Photo by Claire Runkel.

The Butler men’s basketball team came out on top in the final seconds against the DePaul Blue Demons 63-59 in the team’s second attempt at opening Big East play. Simas Lukosius led the Bulldogs with a season-high 15 points, followed by Jayden Taylor and Chuck Harris who both put up 13 points, respectively. Aaron Thompson contributed across the board, recording seven points, assists and rebounds in each respective category.

Both teams returned to action after an extended absence due to COVID-19 issues, with the Bulldogs last game being on Dec. 18 against Purdue at the Crossroads Classic and the Blue Demons being on Dec. 14 against UIC.

The Bulldogs were scheduled to open Big East play against St.Johns on Dec. 23, but the game was canceled prior to tipoff and will be rescheduled at a later date.

Bryce Nze returned to action for the first time since injuring his left shoulder in the Nov. 17 matchup against Michigan State at Hinkle. Nze tied for a team high five rebounds in his return.

Defense put the clamps down

The Bulldogs boasted arguably their best defensive performance of the season against the Blue Demons.

The Blue Demons shot well below their season averages, gardening up only 38.8% from the floor and 30.4% beyond the arc. This was due in part to Butler’s outstanding team performance on defense led by Bryce Golden, Nze, Lukosius and Thompson.

In total, the Dawgs were able to force 21 turnovers — 11 of which came off of steals. Thompson led the thieving effort with a season high seven steals, followed up by Nze with two.

Nze’s return to lineup proved pivotal for the Dawgs, as he and Golden were able to control the paint, preventing DePaul from being able to get to the rim.

This resulted in the Blue Demons going on multiple scoring droughts. The Blue Demons failed to score in nearly the last five minutes of the first half, and went on two four minute droughts during the second half.

However, Golden’s tenacity in the paint ultimately led to his exit from the contest, as he and DePaul forward Yor Anei got tangled up during an attempt for a rebound, resulting in a scuffle between the two near Butler’s bench. Golden was charged with a personal foul, as well as a technical foul — resulting in him fouling out for the remainder of the game.

During the scuffle, DePaul center Nick Ongenda left the bench and made his way on the floor towards the scuffle. Upon official review, he was then ejected from the contest for leaving his team’s bench while he was not actively on the floor.

The Bulldogs showed what they’re capable of on defense with their veterans healthy. The Dawgs will need to maintain their strong defensive efforts going forward into conference play if they want to make their claim for a Big East title and a tournament bid come March.

The Bulldogs took advantage of their opponents scoring deficiencies and put up an impressive offensive performance throughout most of the contest.

Their gameplan centered around their young talent in the backcourt — Lukosius, Taylor and Harris.

Lukosius came into his own against the Blue Demons and showed the promise that Lavall Jordan and his coaching staff saw in him during his recruitment. In the first half alone, Lukosius scored 11 points, going 2-of-2 from beyond the arc while also adding two rebounds and an assist — all while coming off the bench.

Taylor did an excellent job scoring on the floor and was able to draw a few fouls to get to the line for the Dawgs, going 4-of-7 inside the arc and 4-of-6 from the free-throw line. Harris led the Dawgs from beyond the arc with three 3-pointers made.

If Lukosius can continue his production off of the bench, the Dawgs offense will become a real problem down the stretch for their Big East opponents and beyond.

Bulldogs MUST close out better

After playing all phases of the game in unison — the Dawgs went stagnate in the final act.

In the final five minutes of the contest, the Bulldogs allowed the Blue Demons to go on an 8-0 scoring run and bring the contest to within two points with 48 seconds left.

After an empty possession by the Dawgs, the Blue Demons grabbed possession of the ball with under 25 seconds left to play. DePaul forward Brandon Johnson drove towards the basket and was fouled by Lukosius on a non-shooting foul. Johnson then went to the line, making his first free throw, but then missing his second one.

Lukosius then grabbed the missed free throw and was fouled. Lukosius then went to the line and sank two free throws — moving the Dawgs lead to 62-59 with three seconds left.

Fortunately for Butler, DePaul turned the ball over on the inbound pass, giving the Dawgs the possession back and sealing the victory in the final moments with a Jayden Taylor free throw.

While the Dawgs were able to get away with a sloppy finish against the Blue Demons — that kind of carelessness won’t fly against tougher opponents in the conference like Providence, UConn and Xaiver. The Dawgs will need to improve their ability to close out contests or their conference opponents won’t think twice about snatching away a victory in the final moments.