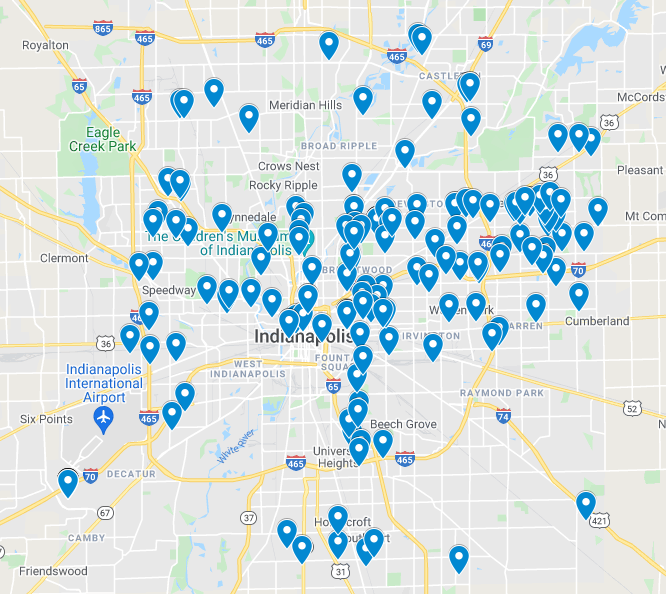 Map showing the locations of Indianapolis homicides in 2021. Photo courtesy of wrtv.com.

Indianapolis’s record-breaking 271 homicides in 2021 continues the pattern of increased violence in the city and tops the 245 in 2020. Despite this, some Butler families and students agree that campus feels safe.

Prior to 2020, homicides in Indianapolis had been under 180 deaths per year. Although rates have been steadily rising since at least 2012 with a slight dip in 2019, the numbers jumped dramatically in both 2020 and 2021 according to an IndyStar analysis of homicide data.

Although Indianapolis has shown a downward trend in reported felony crimes, the city’s 2021 homicide rate was up roughly 30% per 100,000 people from 2020.

Despite this, applications hit a three-year peak in 2021 with over 15,000 students applying to Butler from all 50 states and 90 countries.

The university welcomed 1,145 first-year students in August, making the class the third-largest in Butler history. In addition to being the most diverse class Butler has ever admitted, the class represents 37 states and 13 countries.

Butler Director of Admission Jerome Dueweke said Butler has “not seen any shift in questions about safety from prospective students or families from past years.”

This lack of change is reflected in the campus tours Mason Gaetre, junior chemistry and biology double major, leads for potential students. Gaerte said he hasn’t noticed an increase in questions regarding safety among parents or students in the nearly three years he’s been a tour guide, and that the parents and students he meets seem to be no more concerned about safety than they have been in the past.

Helga Thordsen, parent of first-year student Patrick Thordsen, described Butler as being her son’s dream school. Coming from Old Hickory, Tennessee, a small town near Nashville, Thordsen said that safety was one of her family’s primary concerns when looking for a school. Although she knew about the growing homicide rate in Indianapolis, Thordsen explained that the increase in violent crime was not a deciding factor in the decision to send her son to Butler.

“We had heard about [the rise in homicides]… but unfortunately it seems like it’s everywhere,” Thordsen said.

Using the FBI’s data, TIME said, “This was the largest single-year increase in murders since the Bureau began tracking such statistics in the 1960s.”

Kristi Petroff, mom of Butler junior Gansey Petroff, said that even with the increasing homicide rates, her child feels safe on campus and has never had any safety concerns. Petroff said “safety was not an issue” when choosing a school, and it played no role in her decision to send Gansey to Butler.

As a retired police officer, Petroff is comforted knowing that Butler has their police department right on campus. Acknowledging that students might not be fans of the constant presence of BUPD, Petroff said it’s a relief for her as a parent.

“I think it’s great,” Petroff said. “Whenever we go there’s a heavy police presence … If there were something to happen, it seems like the police would be readily available.”

The last homicide at Butler took place Sept. 24, 2004 when BUPD officer James Davis Jr. was shot in the line of duty while investigating a “suspicious person” outside of Hinkle Fieldhouse.  Taking place more than 17 years ago, Butler has not seen the rise in violent crime as the city of Indianapolis has.

Chief of Public Safety John Conley has been at Butler for the past six years following his 40-year-long career with the Indianapolis Metropolitan Police Department. Conley, who was born and raised in Indianapolis, said that unlike the surrounding city, his biggest issues at Butler are parking problems and the occasional underage drinking case.

“I’m not seeing the rise in crime here on campus like I’m seeing in our community at large,” Conley said. “Unfortunately, we’re sitting in the middle of a major city, so there’s always a chance of some kind of crime happening.”

Although crime at Butler does not reflect that of the surrounding area, Conley said that students should remain vigilant and aware of their circumstances and surroundings. Conley urges students to always report suspicious activity or incidents so BUPD can properly investigate potential safety concerns.

When asked if he thinks students and parents should be more aware of the crime in the surrounding area, Conley said that all the information is already out there, it’s only a matter of people taking the time to look at it. Mentioning the annual security report that comes out every October, Conley said there’s not much more the University can do to educate students and families.

As Indianapolis enters another potentially violent year, already seeing 11 homicides in the first 16 days of 2022, the Butler bubble remains intact, not reflecting the increase in violent crime seen in Indianapolis and across the country.