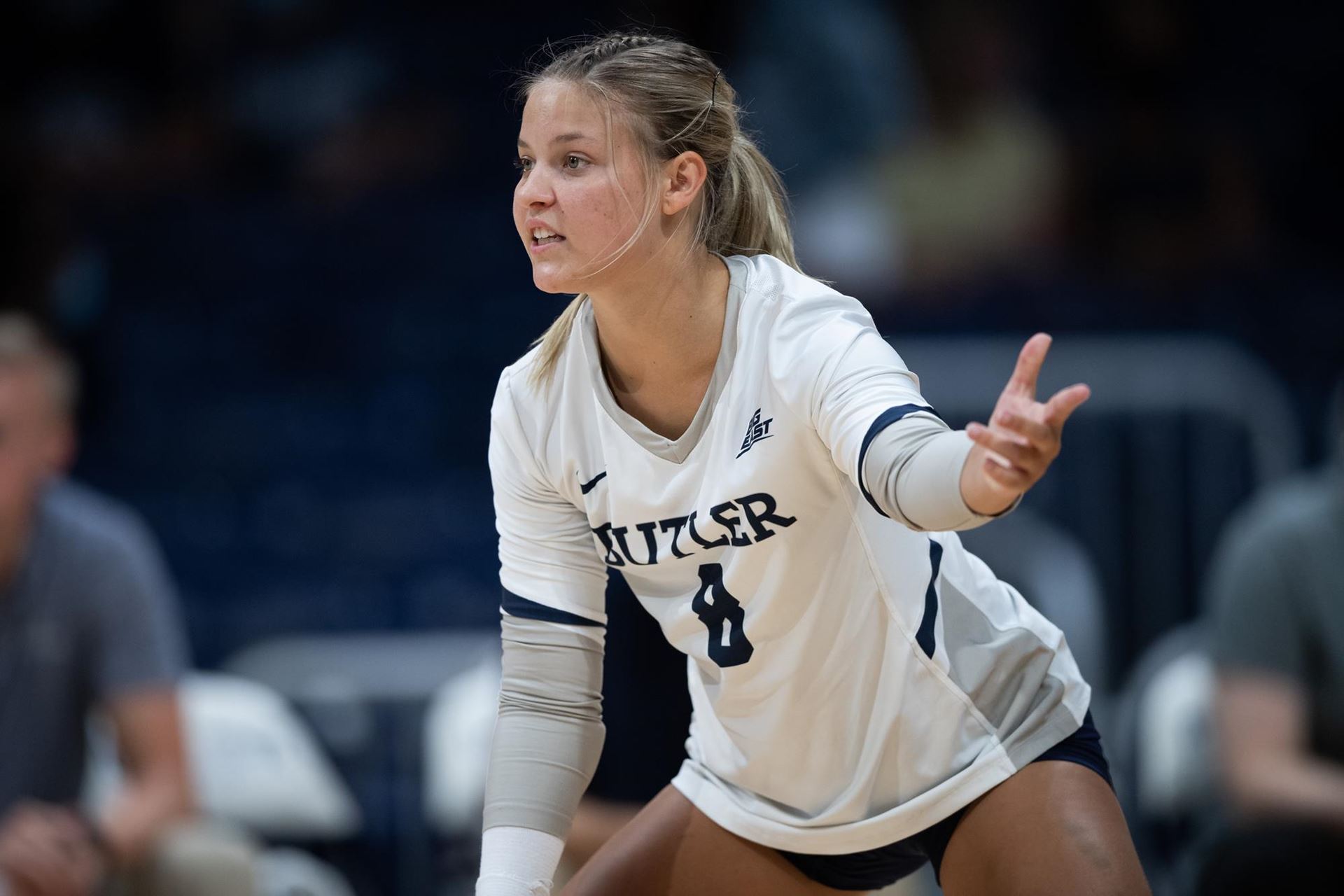 Sophomore Hannah Kelly prepares to receive a serve. The volleyball team is 13-12 on the season following their 3-0 lost to UConn on Oct. 31. Photo courtesy of butlersports.com.

It has been another eventful week for Butler Athletics, with some teams getting close to the end of their regular seasons and others preparing to start theirs.

Both the men’s and women’s cross country teams had very successful weekends. The men repeated as the back-to-back Big East Champions and did it in convincing fashion as they claimed three of the top five individual spots. Graduate student Simon Bedard won the 8K race for the Bulldogs, while Barry Keane and Clark Otte also finished in the top five for Butler.

The women’s team also had a good weekend as they finished in second place as a team in the 6K race — falling just three points behind the defending Big East Champions Georgetown. Redshirt senior Angelina Ellis led the team finishing third overall.

Women’s soccer also played in two games this past week. They first beat Creighton 3-1 last Thursday at the Sellick Bowl to conclude their regular season, which they finished with an overall record of 14-3-1 and a conference record of 7-2-1. They then played UConn in the Quarterfinals of the Big East tournament on Sunday and won 1-0 in a double-overtime thriller on Abigail Isger’s game winning goal in the 106th minute to send Butler to the semifinals of the Big East tournament.

Men’s basketball played the first of its two exhibition games on Saturday vs. Tiffin, and outlasted the Dragons, 94-84, in an incredibly high scoring affair. The Bulldogs led 51-37 at the end of the first half, but a number of defensive errors allowed Tiffin to come back into the game. The Dragons finished the night making 15 total 3-pointers. Freshman Jayden Taylor led the way for the Bulldogs with 25 points, while graduate student Bryce Nze finished with 23 points.

Women’s volleyball had two Big East matchups this past week. They first went to Cincinnati to face Xavier on Friday where they swept Xavier 3-0. Mariah Grunze led the Bulldogs in kills with 11, and Marissa McKelvey had 21 assists. The team returned to Indianapolis to play UConn on Sunday where they fell in straight sets 3-0. Following these two matches, Butler has an overall record of 13-12 and a conference record of 7-5.

Men’s soccer played two games in the past week and lost both matches. They lost 3-2 to Seton Hall last Wednesday at the Sellick Bowl in a rescheduled game that was initially supposed to be played on Oct. 2. Then lost 2-0 vs Creighton on Saturday, which was also senior night. Following these two games, Butler’s overall record falls to 6-8-2 and their conference record is 4-4-1.

Butler traveled to Dayton, Ohio to play the Flyers on Saturday and ultimately fell 38-31. Butler tied the game at seven with six minutes left in the first quarter, but Dayton responded to that with 17 unanswered points. The Bulldogs never cut the deficit to less than seven the rest of the game

Butler quarterback Brett Bushka threw for an impressive 392 passing yards, accompanied by one touchdown and two costly interceptions. Following this loss, the Bulldogs record falls to 2-7 overall and 0-6 in conference play.