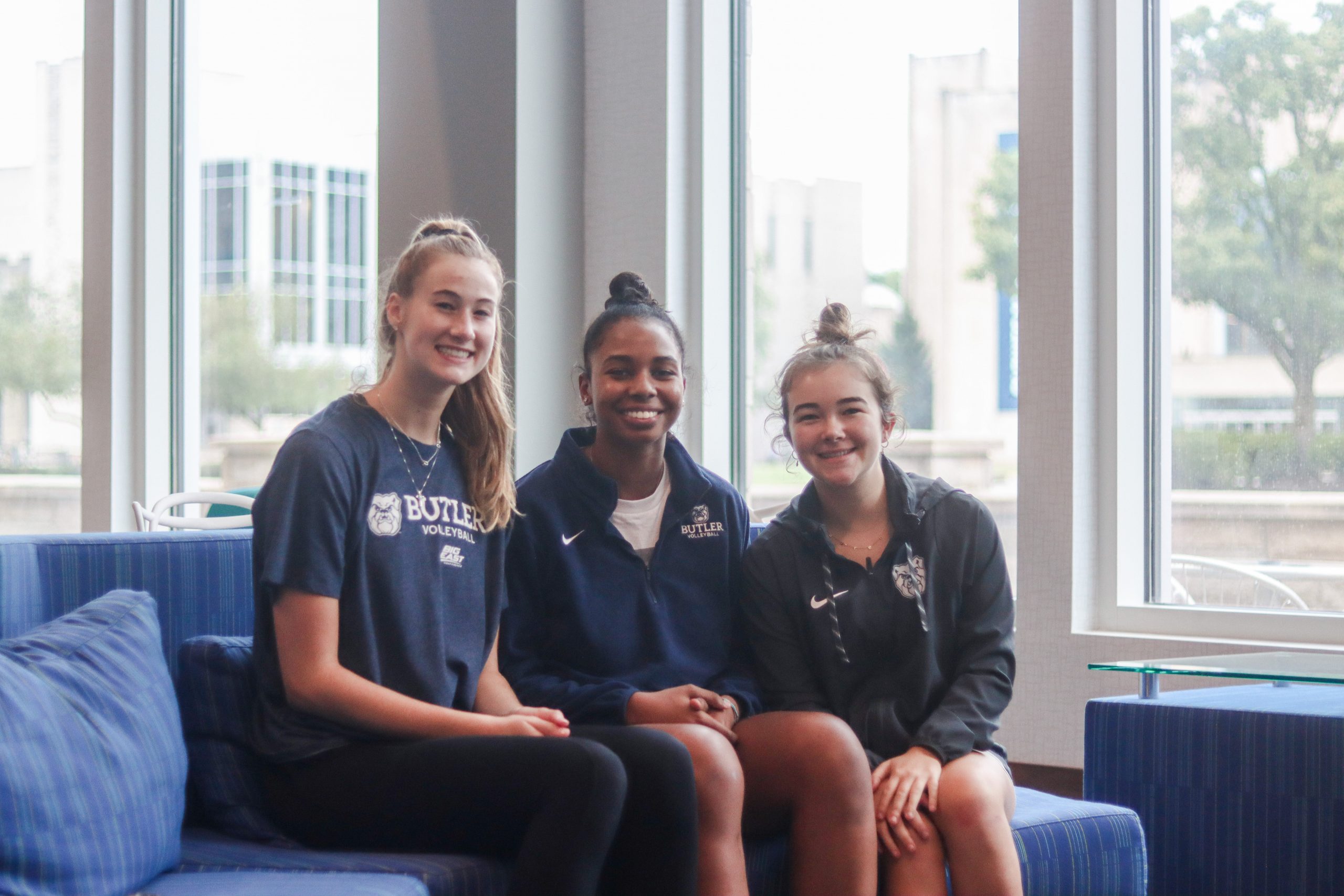 This week, sports editor Kobe Mosley sat down with three first-years who are playing for Butler’s women’s volleyball team. Two of the first-years, Autumn Flowers and Lauren Hughes, are academic sophomores but athletically are recognized as first-years due to COVID-19. Grace Boggess is a true first-year.

Lauren Hughes is a 5-foot-3 defensive libero from Naperville, Ill. Fun fact: Lauren’s favorite NFL team is the Minnesota Vikings, and Adrian Peterson is her favorite Viking ever.

Kobe Mosley: At what point did you know that you would be good enough to play DivisionⅠVolleyball?

Lauren Hughes: I didn’t think it would be enough, honestly. But then, I just started training and I wanted to be in a competitive environment. So I was like, ‘Okay, if I want to be in that environment, then I have to be good enough.’

KM: So since you have been here two years, what’s the relationship like with your other teammates?

LH: Last year, there were seven of us in our class. We were all freshmen and seven is a really big number to have in volleyball as a freshman class. So our seven were really close because we had to be since we all lived together. We couldn’t really go out or do anything so we couldn’t meet people. We had to become close with each other. And it was hard to get close with the upperclassmen because we didn’t really have a season. So once we had a season in spring, I feel like that started to bring us closer. Over the summer, we were here in July and August. So I feel like just doing camps and working out together optionally, it forced us to become closer—together—and that was huge. I think over the summer was a big thing for us.

KM: What’s one thing you’re looking forward to this year that you didn’t really get to experience your first year?

KM: There’s a stigma around volleyball that you have to be tall to play. How do you think you’ve combatted that and been able to succeed in the sport?

KM: Who’s the funniest person on the team?

LH: I would say Jaymeson [Kinley]. She’s probably one of the funniest people I’ve ever met in my life.

KM: Who’s most likely to ask you to make a TikTok with them?

LH: Me. That is so me, I always make TikToks. If I like the sound, I’ll make a TikTok with it.

Autumn Flowers is a 6-foot-1 middle blocker from Atlanta, Ga. Fun fact: Autumn’s favorite hobby outside of volleyball is going shopping with friends. Her favorite thing to buy is sneakers.

KM: What was the deciding factor that led you to choose Butler over maybe your second favorite option?

Autumn Flowers: For me, it was just the school size is very small. And I come from a really big city. So like being in a compact space, you just know everybody, and everybody knows everybody. And then on top of that, for me, it was just having a black coach. Because like some coaches, they’re male, or like Caucasian or whatever, and I was just big on having an African-American coach. So that was the big thing for me.

KM: What kind of advantages come with having a female African-American coach?

AF: They just understand you and like understand the games. In volleyball, being a black girl is very, very different than being a white girl because it’s such a white-dominated sport. So you just have that respect from the African-American coach in volleyball.

KM: What’s one word you would use to describe her?

AF: I’d say dominant. That’s my one word. She’s just dominant about everything; the definition of dominant is Sharon Clark.

KM: So it’s not dominant in a sense of being overbearing or anything like that?

AF: Oh, no, not overbearing. There’s just an understanding of the level, like it’s a certain level that you have to be at to be great. And if you’re not there, then you’re not there.

KM: Who is the most likely to fall asleep like going on a plane ride?

AF: Me and Mimi [Amina Shackelford]. We’ve got to get our sleep!

KM: What’s the biggest difference between Atlanta and Indy that you’ve noticed so far?

AF: The people. Atlanta is a very black-dominant city. They call it “Black Hollywood,” that’s just what it is. Here it’s very different, the city’s way smaller, but you have a very big, wide range of people. So it was kind of a culture shock for me. But it’s easy to adjust, or at least I feel like I adjusted pretty well.

Grace Boggess is a 6-foot-3 middle blocker from Greenwood, Ind. Fun fact: Grace enjoys going hiking when she isn’t playing volleyball. One of her favorite spots to go to is Turkey Run, a state park in Marshall, Ind.

Grace Boggess: Um, definitely the intensity. Club and high school is kind of calm and you just weren’t doing too much. But then coming into college, it’s just a lot and very intense, very competitive.

KM: Who’s one opponent that you’re looking forward to facing this year?

GB: Probably Marquette, I know that we have a pretty good rivalry against them. So I’m excited to play them.

KM: Is there bad blood between you and Marquette?

GB: No, I think they’re just a really good team. And we beat them once last year. So hopefully we can do that again.

KM: So I know you were selected to the America Volleyball Coaches Association’s Phenom list. What was your reaction to being selected for that?

GB: I was super excited. Just like knowing that all the hard work I put in just finally paid off. I committed my freshman year. So it’s been a long way. And I’m just dedicated to putting everything I have into this season and just trying to get as much playing time as I can.

KM: Who is the best dancer on the team?

GB: Oh, Marisa Guisti, for sure. We have some dance parties in the locker room, and she’s always over there dancing.

KM: What are some perks that you think you’ll have being so close to home?

GB: I like being close to my parents and they can come and bring me stuff too. They’ve been here already to do my laundry for me and they are able to come to my games; along with my friends I have a big fan base.