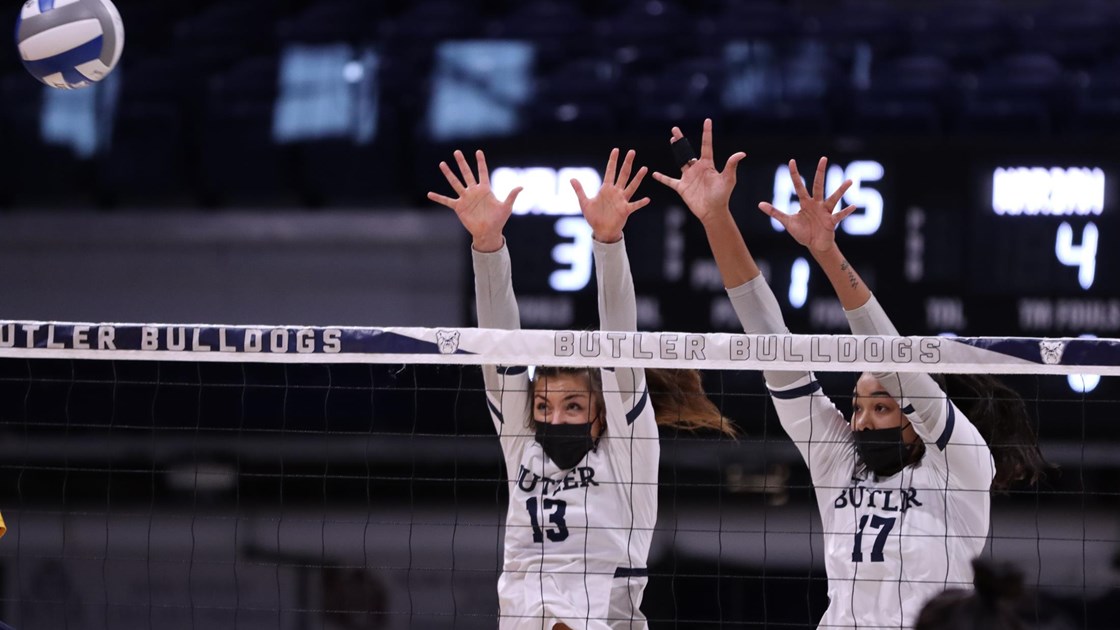 Megan Sheridan and Amina Shackelford attempt to block in Butler’s win over Marian earlier this season. Butler upset No. 24 Marquette on Friday, 3-2. Photo by Butlersports.com.

Butler volleyball shocked then-No. 24 Marquette at home Friday, March 5, upsetting them 3-2. Less than 24 hours later, the Golden Eagles came prepared to fight back as they swept the Bulldogs, 0-3. The Bulldogs are now 4-6 overall and 1-3 in Big East play.

The Bulldogs took an early lead Friday night, winning the first set 25-19 with a big six-point streak to take the lead after being tied 15-15. They then fell 15-25 and 17-25 losing the second and third sets. To force the match into a fifth set, the Bulldogs locked in, leading the Golden Eagles throughout the whole set, winning 25-18. With the fifth set only played to 15, Butler’s six-point scoring run put them out of reach for Marquette to catch up, putting the Big East on notice, winning 15-7.

On Saturday, Butler lost to Marquette 17-25, 22-25 and 12-25. Marquette dominated in all aspects, leading Butler in all statistical categories, except blocks. Marquette recorded 49 kills over Butler’s 24 and 51 digs compared to 48. Sophomore middle Funmi Oladapo had five of the eight blocks for Butler. Sophomore middle Marisa Guisti led the Bulldogs with eight kills and Robinson added seven.

Butler’s next match is at Hinkle against No. 24 Creighton on Friday, March 12 at 6 p.m. Fans are allowed up to 25% capacity as the Bulldogs look to shock the Big East again and take down Creighton.