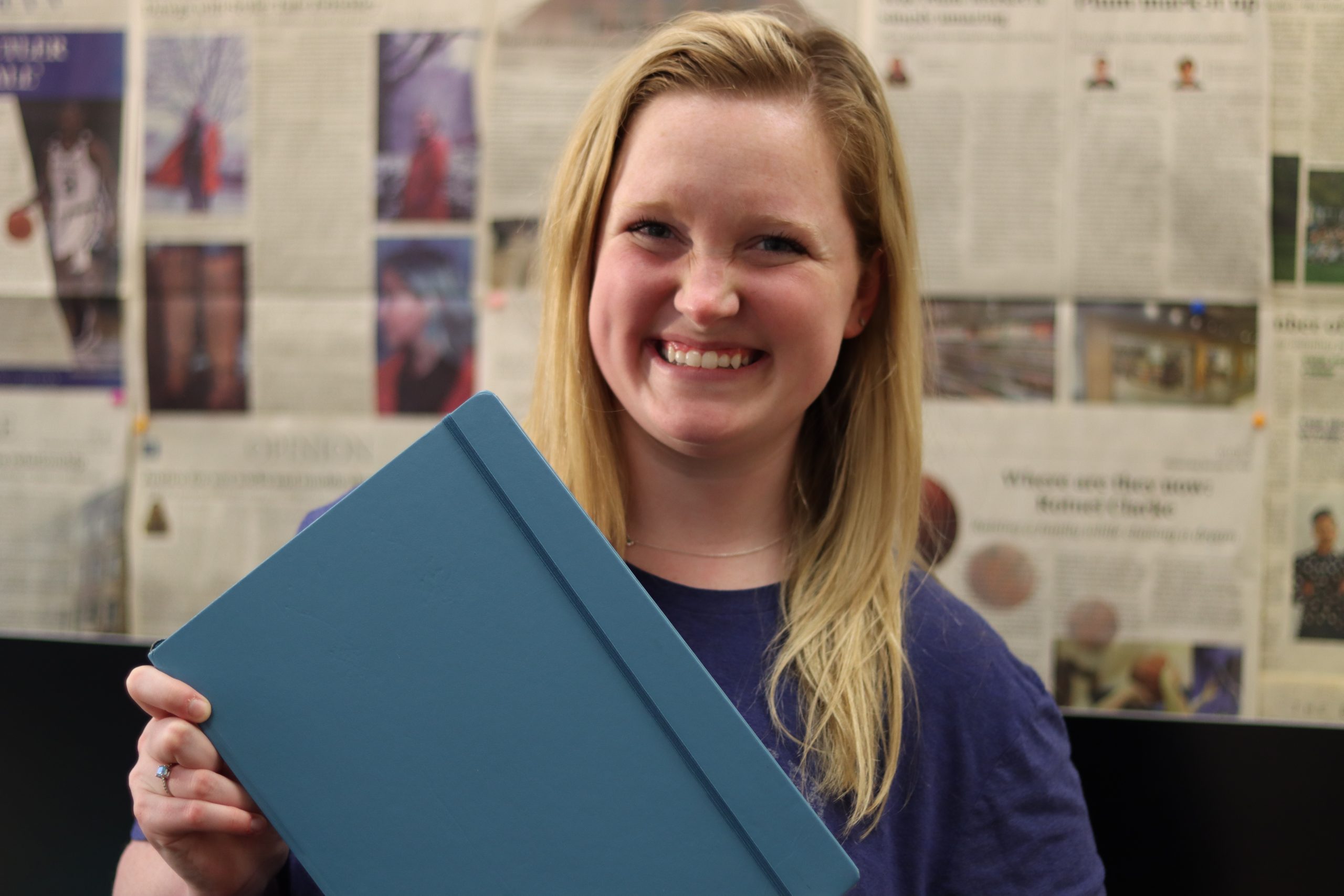 When I timidly walked into The Collegian office for my first meeting ever, I felt wildly out of place. I was a first-year student who didn’t really know anything about news reporting, much less about where I was supposed to be in Fairbanks. I asked, “I’m looking for the Editor-in-Chief?” as that was the only person I knew on staff.

If only that student could see three years down the line when she’d be elected editor-in-chief and lead the newspaper through some of Butler’s hardest moments.

During my time at The Collegian, I’ve produced content for every section, learned more than I ever imagined, laughed with some of my closest friends, shed some happy tears and some sad ones, too. But The Collegian’s readers usually only get to hear the published stories, maybe some occasional hearsay that follows about the reporting or writing itself. This article honors all the moments in between: the uncertainty, the mistakes, the celebrations and late nights that make our publication possible.

So for my senior goodbye, here are some of my best stories in between the stories.

I was assigned my first story in January 2018 about the copious amounts of snow on campus — thrilling, I know. I interviewed the director of facilities and was so nervous I was sweating. I didn’t know I was supposed to record interviews, so picture me in an itchy polyester blouse feverishly taking notes as the source was talking. I’m sure the numbers in the story are wrong.

I wrote news stories for 12 issues in a row that spring semester, and you better believe every single one was cut out of the paper and hung on my closet door in ResCo. The best was saved for last: my story about Butler’s infamous dog walking class being cancelled was printed on the front page — above the fold. Seeing my first front page story was a feeling I won’t soon forget — it was validation that my journalism mattered.

Soon after that story was published, I realized that I couldn’t stand the grind of writing an article every week — so why not try the grind of editing several articles a week? I got the call from then-Editor-in-Chief Dana Lee that she had chosen me to be the assistant news editor, and I cried happy tears because someone had recognized my hard work.

My sophomore year at The Collegian was one of learning experiences and a “fake it til you make it” mentality.

When we gathered as a news section at our fall retreat, I soon realized that I would be assigning stories to reporters, and I had… absolutely no idea how to do that. I had no idea how to do a lot of Collegian-related things, honestly. But luckily, people took chances on me and believed in my abilities before I even knew I had them. For example, Dana entrusted me with interviewing members of the Butler administration as a sophomore. As nervous and shaky as I was, those initial interviews were only practice for the ones to come.

While Dana, Zach Horall and Marisa Miller trusted me to lead the news section, we also mutually leaned on one another for support. To this day, I can text each of them and get a response in a shockingly short amount of time.

Just as I was hitting my stride, I went abroad to London. I felt so disconnected from The Collegian and the people who make it special — even sending the newsroom Insomnia cookies on their first issue of spring semester because I had such bad FOMO.

From there, it must’ve been the English tea and nostalgia that made me decide to run for Editor-in-Chief as a sophomore. From London. Not only was I doing virtual conferences way before their time, but I woke up at 3 a.m. to give a speech to The Collegian staff.

It’s clear I was too young and naive to run the paper — thank god it was Jessica Lee’s responsibility that year. When Jess interviewed me to be her Managing Editor, she said something like she wanted someone to “jump off the journalism cliff with her.” And I barely knew the woman.

Nonetheless, I signed on to join the leadership team with Jess and Josh Doering, our Digital Managing Editor — and from then on we called ourselves LSD as an acronym for our last names. Don’t have to remind myself of the cringe.

Through late nights in the office and stressful situations, I relied on those two to show me examples of what leadership looks like, and the good, bad and ugly that comes with it. I formed friendships that year with editors like Josh Mullenix and Chris Brown, who made the hard days so much easier. That community in Fairbanks 210 lasts longer than when the lights go out on publication nights — even when the nights turn into 5 a.m. mornings.

But little did I know that our greatest challenge was still ahead. When Butler announced it was giving us two extra weeks of spring break, I was in New York City for a journalism conference with several fellow editors. I was sitting in the hotel lobby on the phone with Jess and Josh trying to scramble together a plan so the paper would survive, but all I remember from that conversation was being so incredibly scared.

All I wanted to do was go home and shy away from the outside world, I couldn’t think about covering the news. But it was Jess’ persistence that drove us forward; it was her “not if, but how” attitude that helped prepare me for the weeks to come, and the year to come after that.

For the next five weeks, our staff produced a digital-only paper while spread across the country. After giving a speech to staff from the comfort of my home basement — rather than my cramped London flat — I was elected Editor-in-Chief; and was, quite honestly, terrified. I’d only taken one journalism class at Butler, so how was I going to run a newspaper in a time where journalism matters so much?

Amidst the imposter syndrome, I remembered how others had taken chances on me, believed in me and invested time and effort into helping me progress. And I couldn’t let all of that go to waste; I wanted to pay it forward.

Over the summer of 2020, I went into preparation mode to set the paper up for success. What excited me the most was the opportunity to train an almost-entirely fresh editorial board and help them learn all the things that I’d been taught from previous editors. In that first meeting, I used my first draft of that snow story as an example of how to edit a first time reporter, and let’s just say reading that story back in front of a group of people felt more cringeworthy than inspiring.

Then, we went to work. We covered the university’s handling of COVID-19, the atypical campus life this year and mental health within the student body. When I look back, I’m incredibly proud of the active role journalism has played on campus.

But to me, one function of good journalism is bringing diverse viewpoints to light within the community, and giving the community space to respond.

The Butler Collegian published 23 print issues and an abundance of online content while coping with an incredible amount of change. We’ve turned our publishing process upside down more times than I’d like to count in in the past year, going from all in-person to all virtual to a weird mixture of somewhere in between.

Looking back through this hectic year, it’s clear to see how our staff members have grown into confident, courageous journalists. The editorial board went from practically a group of strangers to a group who trusts one another so immensely that we can be flexible and know that the paper will succeed. I couldn’t be more thankful for my time spent with each of them.

And I had a great support system with me through it all; throughout this year, three people on The Collegian team have picked up the phone whenever I called.

First, our faculty advisor Tatsiana Karaliova supported student journalists relentlessly, whether that be through providing us coffee or giving feedback on the longest of articles. Managing Editor Maddy Kline is the best team player I know — she hates going to bed late, and yet she’s right by my side on Wednesday mornings when the paper’s design gets finalized. And finally, Managing Editor Bridget Early, a steadfast activist who I have absolutely loved working beside for four years. I couldn’t be more grateful for their unwavering presence, and their friendship.

In four years, I went from a first year that was scared to enter the Collegian office to an Editor-in-Chief who led a staff through a pandemic. I interviewed top members of Butler’s administration, worked weekends and weekdays to investigate stories and led our staff with compassion. I can honestly say I’m proud of everything we accomplished this year, and I’m damn proud of myself for the last four years.

When I was elected Editor-in-Chief, I purchased a notebook to get all my thoughts onto paper. This teal leather-bound notebook now holds everything from interview notes to legal jargon to my unfiltered stream of consciousness. But back on April 19, 2020, all it held was a list of 13 goals.

When I was writing those goals all those months ago, I left something out. What I was too afraid to write was to make sure to leave a legacy at The Collegian.

Now, I see my lasting impact in next year’s leaders: they are courageous, empowered, exceptional student journalists. I’m so glad to have played a small role in their Collegian histories.

Most of all, I see it in the badass leading next year’s staff. When I watched Ellie Allen go through the Editor-in-Chief selection process, I couldn’t help but reminisce on when I was her News Editor in 2018, when first-year Ellie was reporting on things like office space in Jordan Hall. Since then, she has grown into a strong, creative, thoughtful leader — and I know she’ll be able to lead the paper to success.

So as I close this teal notebook, I’m faced with a new one — one that’s blank, daunting; one that’s sure to take me on an entirely new journey. But after this notebook, full of joyful memories and a tear-stained page or two, is closed — even if it sits at the back of my closet or the junk drawer — I’ll carry the lessons it taught me wherever I go.