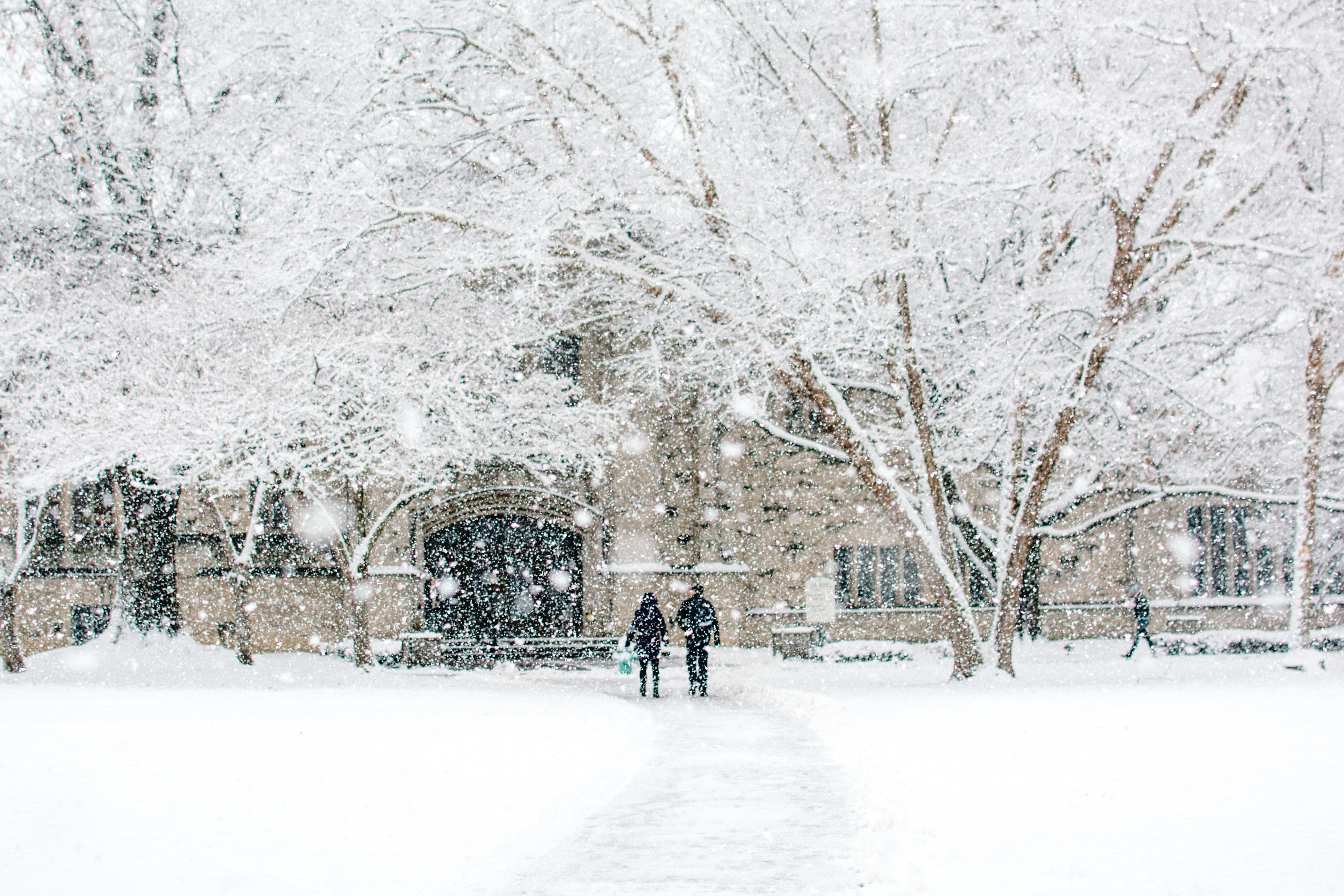 The mall covered in snow in front of Atherton Union. Photo by Adam Cvik.

Indianapolis has experienced freezing temperatures, winter weather advisories, and hazardous conditions. And it is only January.

The winter weather began in December, and the Butler University grounds crew has been working to maintain campus safety.

Rich Michal is the associate vice president of facilities at Butler University. This role requires him to lead a crew of 150 employees.

“One of the most challenging aspects of this winter has been clearing doorways, stairs, and ramps,” Michal said.

The grounds crew has recruited several members of the building services staff to help salt these small but troublesome areas. They officially cleared six hundred doorways, stairs, and ramps.

As of Jan. 19, the grounds crew has cleared almost 2,500,000 square feet on campus. This square footage consists of 26.5 acres of parking lots, 5 miles of interior streets, and 9.5 miles of sidewalks.

Ivan Ross, a sophomore political science and history major, said, “Some less common roads on campus were especially slick this winter, in some spots it seems like they were barely touched at all. Luckily, my car has four wheel drive, or I would’ve been caught in a couple precarious situations.”

Another difficulty for the grounds crew was the rapidly changing weather. Michal said, “If you put down products like rock salt and ice melt before it stops raining, they’ll just wash away.”

Grounds crew and building services employees usually work from 7:00 a.m. to 3:00 p.m., but the presence of snow and ice calls for a different schedule. They have been coming to Butler’s campus as early as 3:00 a.m. to plow and salt different areas.

The first priority is to clear parking lots and main streets on campus. The Butler grounds crew is responsible for streets in between Hampton Drive and 52nd street.

Michal also stated that the parking garage on Sunset Avenue is a huge asset for his crew. With a multitude of cars parked in the garage, his crew does not have to shovel around as many cars in outside lots.

The next priority is to clear paths from residence halls to academic buildings and Atherton Union. The grounds crew is committed to ensuring that Butler students have a walkable path to and from their classes.

McKenna Wilson, Butler University’s vice president of recruitment for panhellenic board, said that extensive planning for winter weather made recruitment successful despite the conditions.

“The snow and ice came on Friday, so we had to meet the night before to plan out different scenarios and strategies,” Wilson said. “That made it a lot easier in the morning.”

The Panhellenic executive board prepared for the worst weather. Wilson and the board kept in contact with Butler University Police Department and the grounds crew to ensure for walkable conditions.

Snow and ice also heavily affected students who commute. Bailey Ryan, an environmental studies and biology major, is a first-year commuter who usually walks, bikes, or drives a mile to campus.

“Walking to school is difficult because of super icy patches, today I fell and totally busted my tailbone,” Ryan said. “Students should avoid unshoveled sidewalks because there is ice underneath them.”

Students are not the only commuters to Butler’s campus. Many professors, including English professor Barbi Smyser-Fauble, drive multiple hours in order to teach their courses.

Smyser-Fauble drives two hours and 40 minutes each day to teach three sections of First Year Seminar and a professional writing course. She said the roads have not been too bad this year, but she always takes timing into consideration.

“The drive takes a longer time in winter because people are usually driving slower,” Smyser-Fauble said. “In fact, it will take much longer if it is snowing on the drive or an interstate is closed.”

Bulldog professors and students are not yet in the clear. The Weather Channel predicts fluctuating temperatures and rain in Indianapolis for the remainder of January. Snow showers are also predicted for early February.

In case of more snow and ice, students are advised to pay close attention to the Butler App and Dawg Alerts.