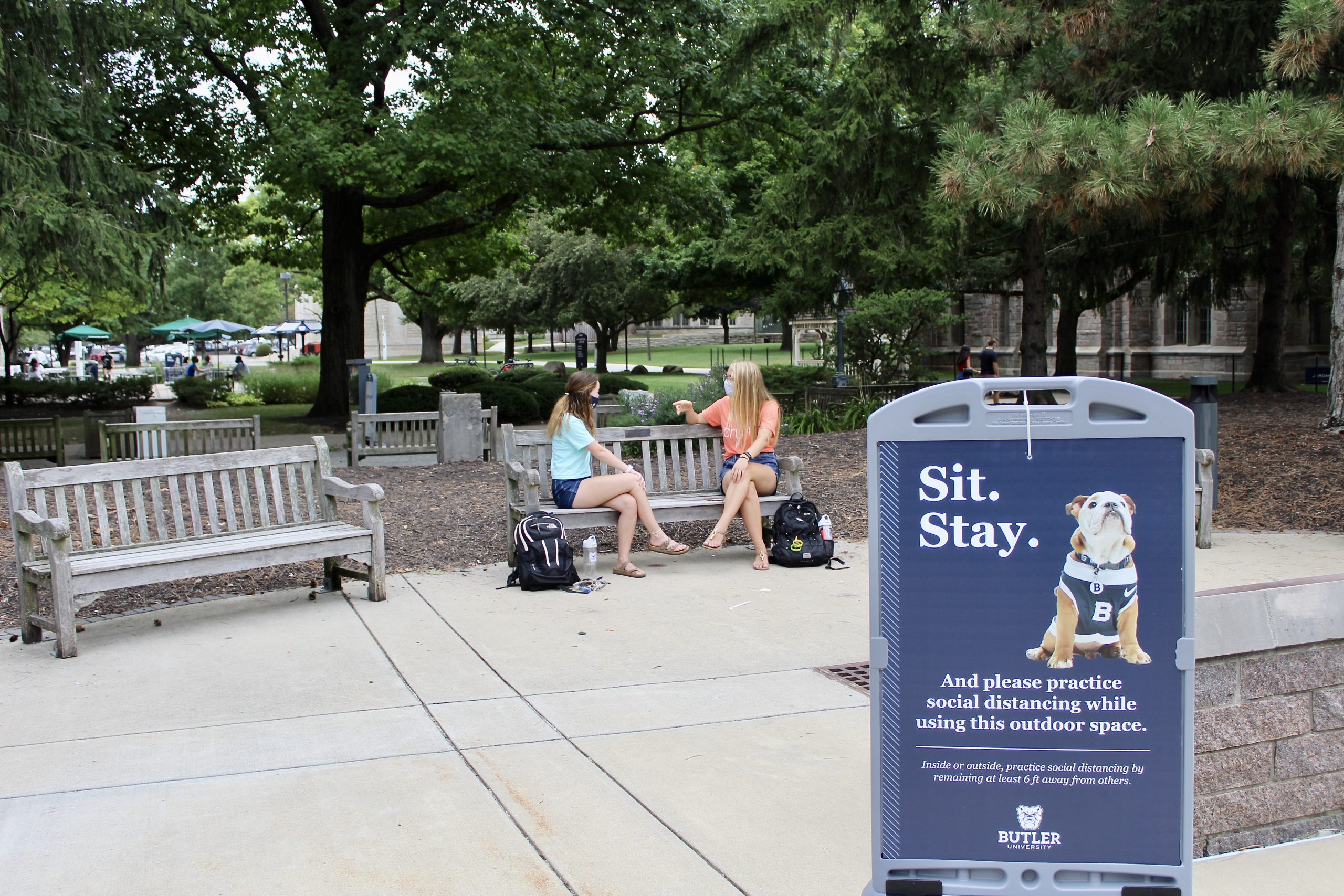 This past year has been one of tremendous changes for Butler students. From adjusting to hybrid classes, to turning the Fairview Community Room into a COVID-19 testing site, to operating a vaccine clinic on campus Butler has operated very differently this year. Looking back, Butler students have mixed feelings about the past year.

In August, students arrived back on campus after an uncertain spring and summer. However, the hopes for the fall semester quickly fell flat when students were informed the day before classes were supposed to start that the first two weeks of the fall semester would be conducted online.

As the fall semester went on, students were confronted by problems with their meal plans. Some students faced issues with raw chicken, while others found it more difficult than ever to find food that fit their dietary restrictions. These problems were even more complicated for some quarantined students, who found themselves being served moldy bread.

Students made it nearly to the end of the fall semester, but were hamstrung in November by a large COVID-19 outbreak on campus that left several Greek houses quarantined. In response to high case numbers, the university suspended all in-person activities for the remainder of the semester — as a result, many students returned home for the holidays earlier than expected.

Based on what I've seen and heard this is a bunch of bull lol you're throwing all the blame onto the students even tho you should be shouldering a good chunk of the blame yourselves.

The financial implications of all of this are SO messed up.

Upon returning to campus in January, students received yet another semester of unconventionality, but traces of things that felt familiar poked through. Basketball season was underway, and Butler’s campus was covered in snow.

Then came the quarantine of Irvington, and the subsequent miscommunications and food debacles that came with it. In a year of unprecedented COVID-19 related developments, this was yet another “first” for Butler — never before had an entire on-campus residence hall been quarantined.

Soon came BUBeWell weekend, in place of a spring break for students. Around the same time, preparations began to host March Madness. While spring break was mourned nearly universally, students had mixed feelings about the presence of March Madness on campus. For some, it was a great opportunity for campus. Others, however, felt like Butler was forcibly exposing them to COVID-19.

Not gonna lie, very strange to see that logo at half court.

Now, nearing the end of April, students are looking back on their experiences from the past several months.

The Butler Collegian asked students to respond on Instagram to a series of prompts and to rate their overall experience this semester out of 10.

When asked to look back on this year, several students reflect on this year in a largely negative light. In response to being asked how they feel mentally after this year, on average, the 20 students who responded to The Collegian’s social media poll rated their experience a three out of 10. When asked the same question in terms of how students felt socially, the 21 student responses averaged a four out of 10. The highest rating any student provided was a seven.

These opinions were echoed by students when asked to describe how they felt about the past year overall. In the same survey, The Collegian asked users to respond to the following prompts and their responses indicated that this year has been challenging.

Looking back on this school year, how do you feel?

Some students looked back on the semester with sadness. User @britt_potts felt particularly upset about this year because it was her last year on Butler’s campus, and she responded with, “Sad that this is what my last year of college looked like.” Similarly, @glenn0403 described feeling a sense of loss when reflecting on the past year: “I feel like I missed out on something. Mostly, I feel like this year didn’t count.”

Other students found themselves wishing the year would come to an end; @megan_megaladon answered, “I’m glad it’s almost over.” User @ellefleenor responded that overall, this past year was “Terrible. Both mentally & physically.”

User @the_schwanster thought of the people in her life who helped her get through the pandemic when responding to the prompt. “Thankful for those who care about my success,” she said.

Some students reflected on Butler’s role this past year and how it made them feel. User @paul_ford_091 answered, “Overlooked and ignored by Butler administration.” Another student, @madelin.lapp, replied: “Frustrated. Butler cared about us less and less as time went on.”

Students had more varied responses when reflecting on what they will remember in the future when looking back on this time. Some students felt they would remember the hardships or want to forget the time entirely, but others felt they would have stories and lessons to share.

In total, 16 students responded to this prompt.

In 20 years, how do you think you’ll remember this time in your life?

When imagining how this year would be remembered, some students responded that they would remember it as an upsetting and challenging time. User @julianna.neuger responded with, “Full of ups and downs and probably a lot of crying and feeling upset at the world.” Another user, @megan_megaladon, also responded that this time would be remembered negatively: “The time when my mental health was the worst, or got really really bad.”

Other students hoped they wouldn’t remember at all. User @0fficiallouise answered, “I hope I don’t.”

Some found the humor in the past year, like @collinpcahill, who responded with, “As a punchline.” User @glenn0403 anticipates remembering this year as a strange time — “I will remember that this time in my life was bizarre. I’ll give myself time to actually process.”

Despite some of the negative responses to this year, in terms of lessons learned, many students were able to find meaning from the past semester.

16 students responded to this prompt.

What have you learned from this experience?

Many students reflected on positive lessons they have learned this year. User @gmolsen_ learned they are resilient: “I’ve learned that I am much more resilient than I thought.” User @britt_potts responded with two lessons — “I’ve learned a lot about personal responsibility and that you can’t take anything for granted.”

Other students learned that change is part of life and how to adapt. User @julianna.neuger answered, “Not everything will go according to plan, new things will happen instead and to embrace it.” Similarly, @glenn0403 responded, “I learned that the world keeps going, so you need to go with it.”

One student felt that the past year highlighted generational differences between professors and students. User @megan_megaladon answered, “Professors really are out of touch, as are most older people.”

13 students responded to this prompt.

What’s the memory of it all that stands out the most?

When asked what memories stood out to students, a wide range of times were described from the emotions at the beginning of the pandemic to recent events like the NCAA tournament and the opportunity to get COVID-19 vaccines.

One student thought back to the beginning of the pandemic. User @glenn0403 described one of a memory from the start of lockdown last year: “Driving to the airport alone at 4:00 am to get home from my study abroad program.” Another thought about an important date that felt different. User @julianna.neuger responded with, “Crying on my birthday because I couldn’t see my friends for family and I was alone.”

For other students, the memory that stood out the most was on Butler’s campus. User @britt_potts remembered changing from virtual to in person classes: “Going back to an in person class for the first time.” Others remembered event like the NCAA tournament such as @madelin.lapp who remembered “March Madness and how Butler only focused on it.” User @the_schwanster thought of receiving the COVID-19 vaccine, “Getting my vaccine. I am so so so grateful!!!!”

10 students responded to this prompt.

These responses are largely the same as results from earlier this semester when students were asked how they felt academically, socially and in terms of COVID-19 safety. At the time of that survey, students felt split academically with 52% feeling prepared and 48% concerned. Most students were feeling isolated with 64%, while 36% felt connected, but 61% of students did feel safe and 39% felt they were at risk for contracting COVID-19.

Regardless of how students feel about this last year, Butler has undergone many changes that will have a lasting impact on students and on campus as a whole.