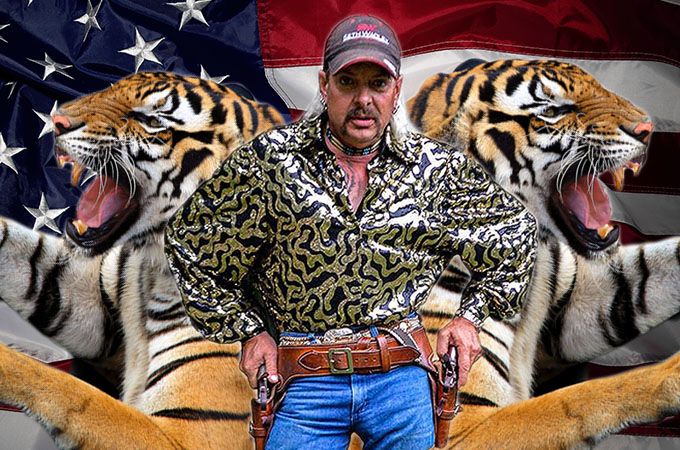 What do a bleached mullet, powdered nitroglycerin and a woman named Carole have in common?

However, Exotic’s star-of-the-show persona extends far beyond the G.W. Zoo. If there’s one thing Exotic is invested in, it’s his own personal brand. From truly exotic merchandise like personalized condoms and tiger printed, metallic boxer briefs, Exotic’s attempts to brand his personality are creative, if not more than a little half-baked.

If in quarantine boredom you’re also looking to shoot your own branding in the foot, here are five ways to do it, Exotic-style.

Your first step is to find an arch enemy on whom to exact revenge for every disappointment in your life. Carole Baskin — the new star of memes everywhere — is an integral part of Joe Exotic’s brand. If we’re being honest, his public proclamations of hatred and intent to murder Carole is what put Joe Exotic on the map. Nothing draws in the American public in like violence against successful women.

Baskin’s goal to end cub petting spits in the face of Exotic’s primary money maker. The two are also engaged in multiple copyright lawsuits resulting from Exotic’s petty attempts to draw clicks away from the Big Cat Rescue brand. Another shallow attempt to defame Baskin includes protesting in front of her park in a bunny costume drenched in blood.

This conflict feeds into the docuseries’ surprisingly dark primary questions:

Exotic is among the loudest proponents of the salacious rumor that Carole brutally murdered her husband. This ad-hominem fallacy is a lame attempt to dismantle Carole’s efforts to end private wildlife ownership and prop up his own morality and sense of justice.

However, as demonstrated by the show, having a homicidal hatred for an arch enemy will in fact land you in jail.

Step 2: Learn the intricacies of iMovie

Occasionally, Exotic covers his bleached mullet with a cowboy hat and lip syncs to country songs. To achieve this same status, find an iPhone 4, whip out your guitar, and make a poorly-produced music video — or 40.

Exotic’s most popular songs — actually written by musicians Vince Johnson and Danny Clinton — include “I Saw a Tiger” and “Here Kitty Kitty.”

Adding to the list of paradoxes that amplify Exotic’s enigmatic, mildly threatening persona, his video “I Saw A Tiger” is a boastful ballad about his love for big cats. In reality, Exotic has been accused of killing his cats for cage space and neglects them to fight a never-ending battle — thanks, Carole — but sure, a cute little love song fixes everything, right?

The music video for “Here Kitty Kitty” is Exotic’s magnum opus. In comparison to his seemingly-endless archive of music videos, it’s clear he did not want to mess around with the video’s production.

Typically, Exotic’s music videos feature poorly edited stock footage of funnel clouds closing in on his zoo. But “Here Kitty Kitty” is a refreshing change. Rather than abusing greenscreens or relying on iMovie, the video seems more polished.

The video features a woman — who looks like she could be Carole Baskin’s long lost twin — wearing an obnoxiously large flower crown and feeding “human remains” to tigers from a silver platter. Remember, the most important thing you can do to destroy your personal brand is murder your sworn enemy and feed them to the tigers.

With endless opportunities for success, you’d think that a career in music would be the perfect complement to your already thriving brand. But if you’re closely following in Exotic’s footsteps, a vital part of your brand identity is to make sure your videos have terrible fonts and overdramatized plot lines.

If the 2016 election taught Americans anything, it’s that if you want attention, you have to run for president. Like any good narcissistic American, Mr. Exotic was among those to make a bid for the White House. His presidential campaign was an obvious publicity stunt, though he was not the only candidate to treat it as such.

In 2018, Exotic took Oklahoma’s gubernatorial race seriously, winning over 664 voters with Joe Exotic condoms, buttons and stickers. On the side of his campaign van, reminiscent of a middle schooler’s Google Slides presentation, he listed out his platform. Ironically, he’s pro-prison reform and anti-cyberbullying. Ouch.

As you begin your campaign, be sure to follow in Exotic’s footsteps and post to your YouTube channel in a way that will later incriminate you in a federal murder-for-hire plot against your aforementioned arch-nemesis.

One of Exotic’s top issues, one he failed to mention on his platform, was preventing the passing of the Big Cat Public Safety Act. The bill aims to crack down on wildlife trafficking and would restrict contact between wild animals and the public, essentially putting Exotic out of business.

Carole and her husband Howard Baskin have spent a fortune lobbying for this bill, possibly fueling Joe’s tiger-like appetite for revenge.

Speaking of appetite, during the holidays Exotic hosts crowds of people for massive dinners. While perhaps not an explicitly political stunt, Exotic tries to create a persona of goodwill towards the community — a heartwarming eccentricity in his otherwise unexplainable character. This is a side of Exotic that many people don’t expect to see, considering his passionate rants about Carole Baskin and the “Message to Donald Trump” saga on YouTube.

Maybe that’s what those 664 voters were thinking about: free statewide holiday meals…

Step 4: Host a reality show and create a YouTube channel

Your fourth step to ruining your personal brand is to pervade as many social platforms as possible with the least amount of strategic planning. Low quality technology and radical ideology is preferred.

Exotic’s forays into television center around JoeExoticTV, formerly live-streamed every night at 6 p.m. CST. One of Exotic’s favorite uses of the channel was to broadcast his hatred for Carole Baskin. Excerpts of JoeExoticTV shown on the docuseries feature Baskin’s head floating in a jar of mysterious liquid as well as other violent depictions of the big cat lover, such as tying a mannequin to a tree and blowing it up — for more information on incorporating your arch nemesis, see step one.

The various facets of Exotic’s self-branding are as wild and disparate as Exotic himself. Instead of one consistent image, Exotic puts it all out there  — from his soft and tender love for the baby animals he unethically breeds to his perverse homicidal plots.

Kids, not everything belongs on the Internet.

Step 5: Star in a docuseries

Let’s be real, if you’re the star of a docuseries, you’ve probably messed something up. Or you’ve been brought to court in some way, shape or fashion. Being followed by cameras 24/7 is never ideal for one’s image.

Firstly, you will definitely be taken out of context. In a docuseries there are no guarantees that what you say will sound the same to viewers. You are subject to the filmmaker’s bias, and your brand likely won’t withstand the limelight.

If anything, Exotic’s case proves that a docuseries entirely negates any attempts to create a personal brand. They show the good and the bad, the tiger-cuddling and the crazy. Clearly, Exotic’s overreaching attempts to bask in every possible facet of attention prevented him from coming out unscathed.

If you’re truly trying to spice up your life in quarantine by reconsidering your personal branding, few examples could serve your need for spontaneity better than Joe Exotic. The dude lives his life like a Mad-Lib blurb: “I chose to try ______ because I was ______ by _______! Screw Carole Baskin!”