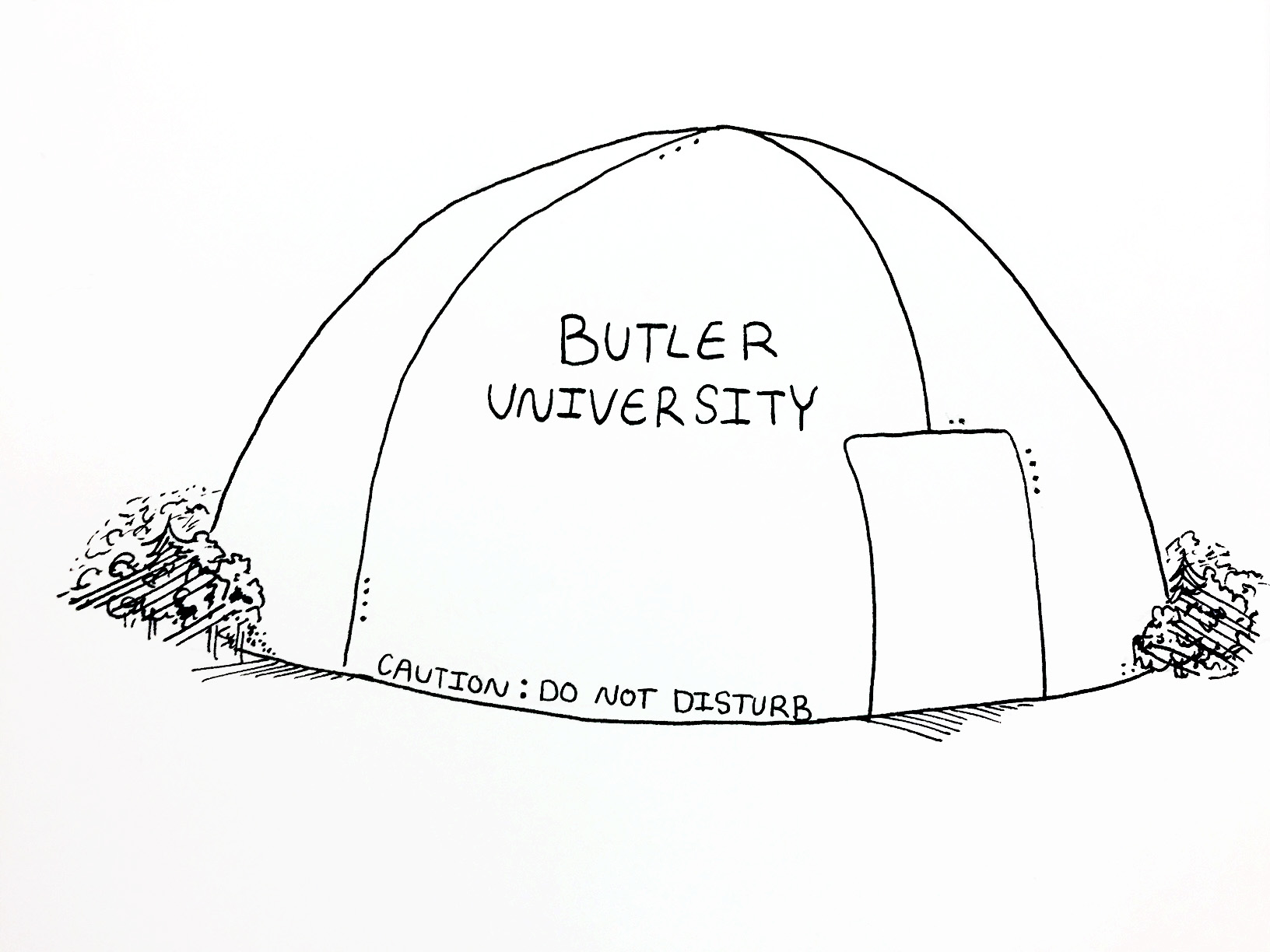 The idea of the Butler Bubble, and the sheer fact that it exists, creates a conversation around whether its positive impacts outweigh the negative, and whether the university or community need to do more to counteract its negative effects.

The Bubble has a few positive merits. For one, it creates a tight-knit community consisting of all Butler personnel and students, in which the Community of Care is alive and well. It also creates a sense of safety on campus that is comforting to us students living on campus, as well as college students’ parents.

However, there are inherent negative characteristics of a social system in which people are sheltered, protected and sometimes even ignorant to larger issues.

Indianapolis as a city and as a community is not even near perfect. There are many social and economic issues that exist in Indianapolis that can be identified by travelling just minutes outside of Butler University’s campus. Issues of poverty, food scarcity, discrimination or general government disorganization will often go unnoticed or ignored by the Butler student that has all of their needs met by the Butler campus and its community.

That being said, it would make sense to conclude that Butler owes a lot to the Indianapolis community and the benefits it brings to the Butler Community, and it would make sense that the university would stress the need for students to reach out to the greater Indianapolis community. However, the university simply does not deliver well on the importance of contributing to the city.

To gain a perspective on how students feel about the Bubble, first-year students and senior students were asked their thoughts on the inherent positive and negative characteristics of the Bubble.

Bridget Early, a first-year vocal performance and political science major, has only been at Butler for a few weeks, but said she is well aware of the Bubble and can recognize its effect.

“I went off campus for the first time a few days ago and I didn’t feel the need to, I just wanted to,” Early said. “Everything is here. Food and exercise are here. There’s just not really a need to leave campus if you do not want to.

In identifying how the Bubble meets everyone’s needs, Early also spoke to the community it creates.

“There is definitely a huge, positive community,” Early said. “I have family that went to school in the inner city at NYU and after class students would just disperse and not really see each other. Even though Butler is small, you see everyone so it feels like a large community in which people look out for each other.”

“I think safety is a huge aspect of the Bubble, and that the Bubble fosters the Community of Care,” Demel said. “Because the Butler community is so close, there aren’t really any foreign threats. I have a friend who goes to DePaul in downtown Chicago where anyone can walk through their campus, but here it’s easy to recognize when someone walking through campus is not a part of the community.”

Alternatively, the senior student perspective on the Bubble is equally interesting, and their perspective, with their years of Butler experience, differs slightly from the first years.

Marissa Byers, a senior environmental studies and Spanish major, had strong feelings in her well formed perspective of the Bubble.

She defined the Bubble as, “The university and the students closing themselves off to the city and the outside Indianapolis community.”

She also thought the Bubble was more of an issue as a first year, where students are unfamiliar with the terrain of Butler, let alone the greater Indianapolis community. This, in addition to becoming more involved and later having a car on campus, contributed to her notion that it is more of a problem among first years.

Madeline Fry, a senior elementary education major, gave her thoughts on the Bubble, and she spoke most passionately about the negative aspects she sees.

While she identifies the Bubble has merits of safety, she also said it creates a false sense of safety and security to the issues that occur on campus. Madeline spoke about sexual assault and alcohol abuse, and how these issues will often go ignored.

“Not everything within the Bubble is rainbows and butterflies, and I feel like the overwhelming sense of safety is preventing students from seeing that entirely,” Fry said.

Fry went on to offer her thoughts on how the University should resolve the issue.

“As for a resolution, I think Butler needs to be more honest and proactive with what is going on around campus,” Fry said. “As a student, I want to know if there was a reported sexual assault or if there is a high number of students being sent to the ER because of alcohol-related issues. Stop brushing it under the rug. That is the most frustrating thing as a student.”

The perspective that senior students have on the specific issues ignored by the Butler community is interesting, and a much more informed perspective than the first-year student’s. Though as the first years continue their Butler career they will undoubtedly be able to recognize more specifically where the Bubble affects the Indianapolis community and Butler students and staff.

Student opinion showed both student groups feel that the resources to become involved or to assist the greater Indianapolis community are available through Butler University, they are just not well-advertised and the average busy college student will often not seek them out.

Programs like BITS that receive a lot of attention from Butler and the media are wonderful, but one big philanthropic event every year is not enough to meet the needs of the community. These types of events should occur much more often if Butler is to pay back the community for all it provides us.

The Butler Bubble is without doubt an existing entity that surrounds this campus, and it has many characteristics, positive and negative. The biggest issue with the Bubble is Butler University and its students not taking responsibility for their role in the Indianapolis community. While our university is home to a rich community of care that provides comfort to the college student, the college student and the university must work to spread this throughout Indianapolis.