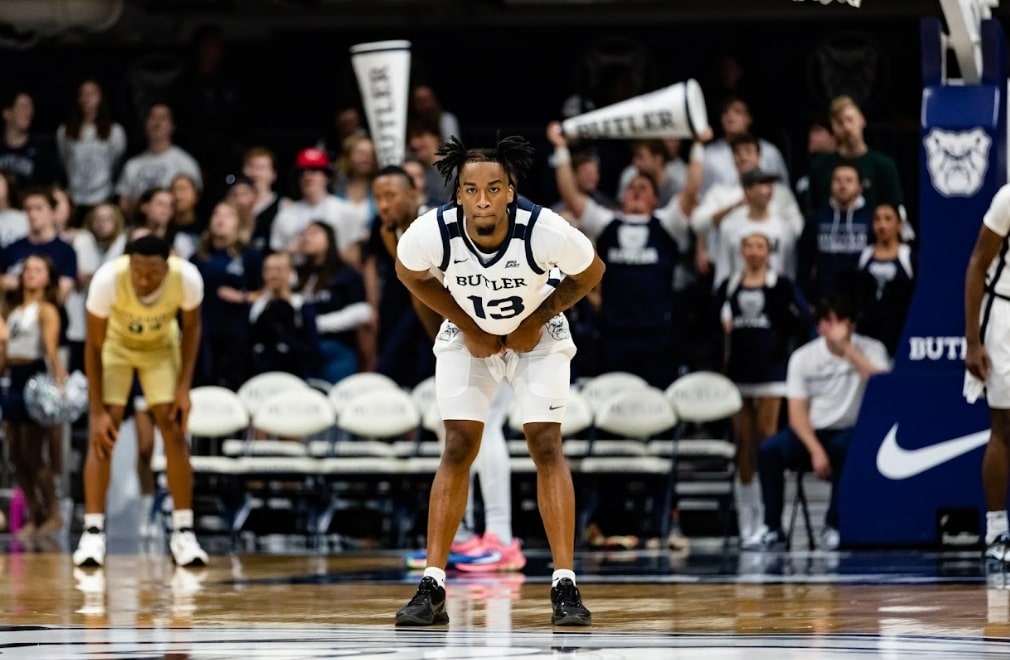 In their final two games of the Battle 4 Atlantis Tournament, the Butler men’s basketball team split the two matchups, winning against BYU 75-70 on Nov. 24 and losing to NC State 76-61 the following day. The Bulldogs leave the Bahamas with a 4-3 record and will face more non-conference opponents before Big East play begins on Dec. 17.

Since the action coincided with the Thanksgiving holiday, it was best to wait until the tournament was over before recapping the Dawgs’ final two games of the tournament. So, let’s go beyond the box score(s).

Following a disappointing outing against the eventual Battle 4 Atlantis champion Tennessee Volunteers, the Bulldogs bounced back with a gritty 75-70 win over the BYU Cougars. Sophomore guard Jayden Taylor led the Bulldogs with a season-high 20 points. Graduate Eric Hunter Jr. was right behind Taylor with 19 points, hitting all three of his three-point attempts on the night. Both sophomore guard/forward Simas Lukosius and graduate center Manny Bates scored 14 points. Lukosius also led the team in rebounds with six. Despite barely being outscored in the second half, Butler’s offense was still efficient — they shot 53% from the field and 47% from three.

The Cougars were led by sophomore Fousseyni Traore, who logged a game-high 21 points and 12 rebounds. Senior Gideon George scored 14 points and senior Rudi Williams rounded out the double-digit scoring with 12 points. The majority of BYU’s points had to come in the paint — 46 of their 70 points were from inside — because the Cougars shot just 3-20 from beyond the arc.

Taylor was probably the only bright spot for the Bulldogs in the game versus Tennessee, and he continued to shine against BYU. At all levels, Taylor was finding ways to score. He did it efficiently too, shooting over 60% from the floor and 50% from three. To open up the second half, BYU went on a 12-0 run. To combat that, Taylor led Butler on a 17-6 run and scored 11 of those points. Hunter Jr. commended his teammate for being assertive on the offensive end.

“I just thought he was aggressive,” Hunter Jr. said. “He was able to attack in space a lot … he just took what the defense gave him and it ended up working out.”

Later in the game, it was Hunter Jr.’s turn to step up. His 19 points were also a season-high and came at a crucial time. 12 of Hunter’s 19 came in the last seven minutes of the game, including all three of his three-pointers. Both Taylor and Hunter Jr.’s production on offense will continue to be a huge factor for the Dawgs’ success.

At around the 12:37 mark in the first half, sophomore forward D.J. Hughes left the game with an injury and would not return after playing just five minutes. It was later ruled that Hughes has a concussion, which is what kept him out of the game against NC State. After already having a slim rotation, head coach Thad Matta was forced to play Bates with two fouls and first-year Connor Turnbull — who played a career-high eight minutes off the bench.

The verdict is still to be determined if Hughes can make it back by Nov. 30 for the Bulldogs’ matchup with Kansas State. If he cannot go, it will be absolutely essential that Bates stays out of foul trouble — he was forced to sit just two minutes into the game against BYU. Otherwise, Butler will give up a lot of size and experience by giving Turnbull and redshirt first-year Pierce Thomas extended minutes off the bench.

In the fifth-place game, the Bulldogs fell to the Wolfpack 76-61 to end the Battle 4 Atlantis Tournament at a 1-2 record. Junior Chuck Harris led all scorers with 20 points and sophomore Jayden Taylor continued his strong tournament play ending the night with 18 points. Graduate Eric Hunter Jr. added 12 points and seven rebounds to round out the double-digit scorers. Graduate Manny Bates was in foul trouble throughout the evening but was still able to score eight points and bring down nine rebounds.

The Wolfpack shot 44.6% from the field, buoyed by a 44.4% clip from the three-point line in the second half of the game. Graduate Jarkel Joiner led the Wolfpack with 15 points. Graduate D.J. Burns added 14 points in 17 minutes off the bench. Graduate Dusan Mahorcic chipped in 13 points while sophomore Terquavion Smith and graduate Jack Clark each had 10 points for what was a balanced scoring effort.

While the Bulldogs did not have as many turnovers as in their game against Tennessee, the first half was eerily similar. Nine first-half turnovers allowed the Wolfpack to open up a commanding lead at halftime of 35-22. The Bulldogs were never able to get into a rhythm offensively as a result of turning over the basketball. Hunter Jr. had four of the nine first-half turnovers and seemed out of sorts handling the ball. This was an unexpected performance from the veteran guard who was able to settle in during the second half to salvage his night.

In the second half, the Bulldogs committed just five turnovers and scored 39 points. The team looked much more explosive on offense but the damage from the first half had been done and the Dawgs were unable to claw back into the game.

The Bulldogs were short-handed once again and were not helped by the tournament schedule. Three games in a short span tend to be difficult on any team and this proved to be no exception to the rule. Coming into the game, the team had eight available players. The starting five of Hunter Jr, Harris, Taylor, Lukosius and Bates all played at least 33 minutes.

When your starting five are playing heavy minutes, mistakes and fatigue can set in. Matta recognized that the team was tired, but knows the team has to find a way to remain tough out on the floor.

“We’ve got to get tougher mentally, tougher physically and we gotta get healthy,” Matta said. “I don’t know when that’s going to happen, but three games in three days with eight guys is tough.”

There is no doubt that the team has had to push through this stretch without certain players available. Unfortunately, this might continue as the players that have missed multiple games still are without a timetable for return. Once these players come back, it can be expected that a deeper rotation will be in the cards, but until then, the starters are going to have to be prepared to play as many minutes as possible.

Butler will return to Hinkle Fieldhouse and host Kansas State on Nov. 30 in the Big East-Big 12 Battle. The two teams have met one time previously in the 2010 NCAA Tournament in what was a 63-56 win that sent the Bulldogs to the Final Four.

This year, Kansas State will enter the matchup 6-0. The Wildcats are coming off a hard-fought 61-59 win over LSU to win the Cayman Islands Classic title. The Wildcats are led by seniors Keyontae Johnson and Markquis Nowell. Johnson and Nowell are averaging 17.7 and 15.3 points per game, respectively.