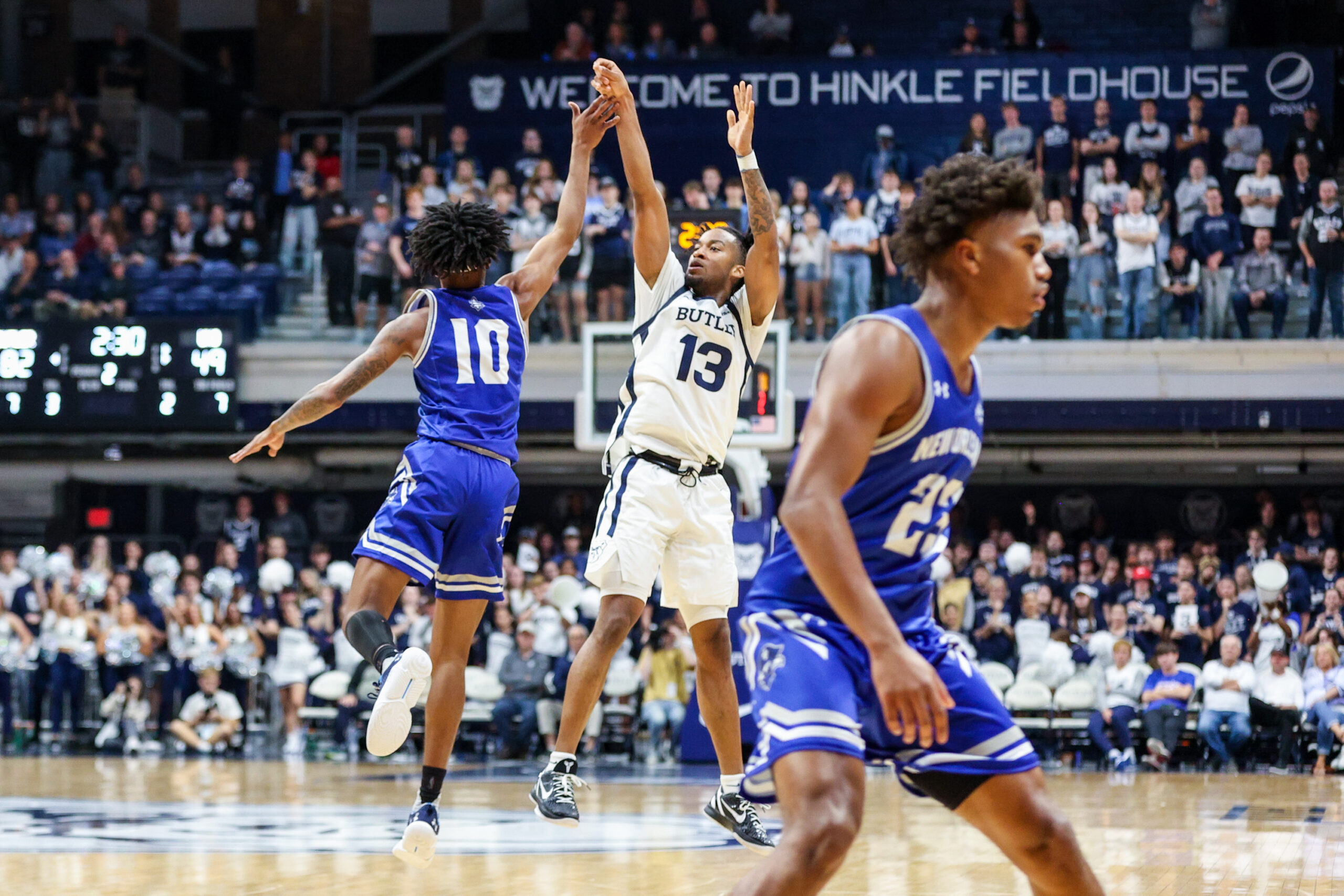 Sophomore Jayden Taylor led all scorers with 18 points in the 71-45 loss to Tennessee on Nov. 23. Photo by Claire Runkel.

After starting off well for much of the first half, Butler was unable to keep up with Tennessee and fell 71-45 in the opening round of the Battle 4 Atlantis Tournament. Sophomore Jayden Taylor carried much of the offensive load for the Bulldogs, leading all scorers with 18 points and continuing his hot shooting over the last three games. Graduate Eric Hunter Jr. — who played 36 minutes — added eight points. Off the bench, redshirt first-year Pierce Thomas contributed five points and 3 steals.

The Volunteers shot 53% from the field in the second half after shooting just 41% in the first half. Tennessee also played without their leading scorer, senior Josiah-Jordan James. Senior Santiago Vescovi led the Vols with 13 points. First-year Julian Phillips and sophomore Zakai Zeigler were also in double figures, scoring 11 and 10 points, respectively.

Let’s go beyond the box score to unpack Butler’s toughest loss of the early season.

For the second time this season, graduate Manny Bates was forced to sit out for significant time in the first half due to foul trouble. Bates played just five minutes before earning his second foul. Junior guard Chuck Harris played 10 minutes before having to sit the remainder of the half with two fouls are well. Piled on to the fact that sophomore guard Simas Lukosius was struggling mightly to keep possession of the ball, head coach Thad Matta was forced to play Hunter Jr. and his reserves much more than he wanted to in the first half. This allowed Tennessee to come back and take the lead before half, not looking back after that.

Lukosius — who ended the game with more turnovers than points — wasn’t the only one who struggled with giving Tennessee extra possessions. Everyone besides first-year Connor Turnbull — who played four minutes in garbage time — had at least one turnover and four players had over two turnovers. 23 turnovers resulting in 18 points off turnovers for Tennessee is not ideal when trying to compete against a ranked opponent.

Too often were the Bulldogs unable to find a basket while the Volunteers went on a run. In the last 3:44 minutes of the first half, Butler failed to score a point while Tennessee went on a 10-0 run to lead by five going into halftime.

A lot of the inefficiency on offense for Butler can no question be credited to the length and mobility of Tennessee’s defense. Matta also attributed the lack of offense to the absence of a team identity.

On to game number two

Game two of the three games that Butler plays in the Bahamas will be on Thanksgiving Day against the BYU Cougars. BYU lost their opening round matchup as well, falling to USC 82-76. The Cougars enter with a similar 3-2 record and have four players averaging 10+ points per game.