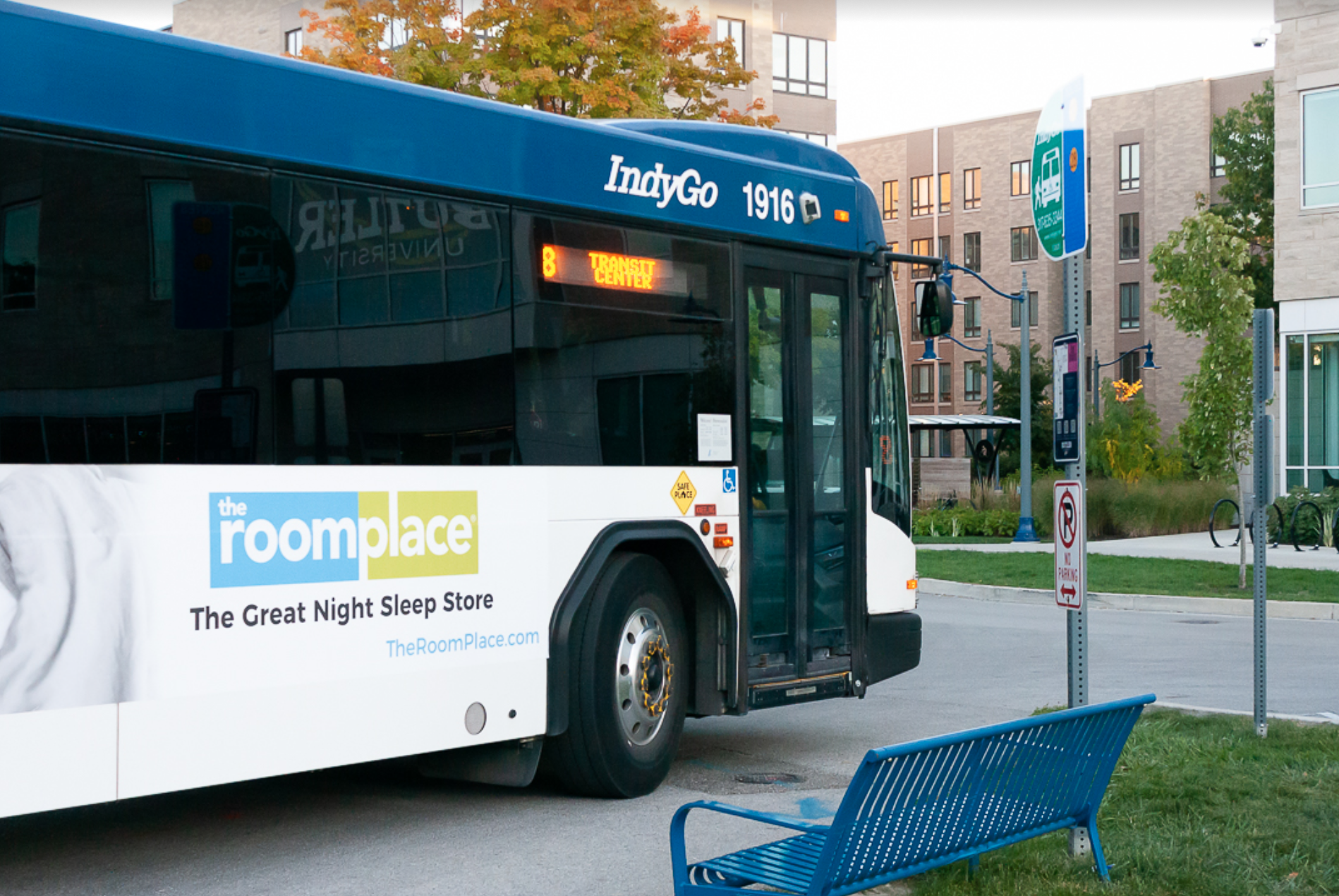 The IndyGo bus system is one example of many ways to navigate Indianapolis. Photo by Katerina Anderson.

Indianapolis is a big city, and one with a lack of major transportation systems, such as a metro. This leaves students who choose not to bring cars to campus or do not own cars struggling to find ways to get around. The city is not very walkable, and students do not necessarily want to be the friend always asking for a ride. So, how do you get around without a car?

The IndyGo bus system is one viable option for transportation; the system has bus stops in the loop between Schrott Center for the Arts and Fairview House and in front of the Health & Recreation Complex. Its website allows students to plug in where they are and want to go, and then they can find bus routes that work for them. They also have a bus tracking feature so that riders are never left wondering when their bus is on its way. A ticket costs $1.75, but a College “S-Pass” is offered for university students. The pass costs $30 and covers trips for 30 days. S-Passes are available for purchase through the office of student involvement and leadership.

Audrey Skidmore, sophomore dance arts administration major, uses the bus to get downtown quite frequently, though she does have some problems with the system at times.

“It’s not that convenient,” Skidmore said. “If you need to go somewhere that’s like, right along [the] bus route, it’s easy. It’s perfect because it gets the job done. If you need to just go down into Broad Ripple, it’s easy. Going to Target is pretty easy, but it’s just times [where] I’ve waited 30 minutes for a bus because of delays. Or I’ve had buses come early when I’m not there and literally been running while they drive away.”

Skidmore wishes Butler would help students pay for bus fares, but she has found some discounts and hacks for IndyGo.

“Last year I just rode the bus for free; I would use coins, and sometimes the machine would be down, or the driver would [say] ‘just get on the bus,’” Skidmore said. “This year I’ve been using My Key more, which is an app, and it’s really cheap. Like most of the time, [bus fare] is $1.75, but if you’re doing two rides there and back [with My Key], it’s $2.15.”

While IndyGo seems daunting, using the IndyGo and My Key apps helps make things much easier for riders. Skidmore uses the IndyGo app to track her routes and buses, and My Key to pay for her trip and discount the fare. IndyGo is working on improvements, so soon enough the bus system will reach new places and be more reliable for students.

Bird and Lime scooters are scattered all over campus, and they are also a convenient way to get around. While they can’t go on highways according to Indiana law, electric scooters are an easy way to get across campus and to places nearby, like Broad Ripple or the grocery store. Apps such as Bird and Lime allow riders to find and hire scooters nearby where scooters cost about $0.50 a minute. On the apps riders can also pay to reserve scooters nearby for up to 30 minutes before use in order to ensure they have a ride.

Many students choose to bring bikes to campus to help them get around. Getting to Broad Ripple by bike is quite easy thanks to bike lanes and the canal path. Students can rent bikes close to campus through the Pacers Bikeshare service. There are stations close to campus, including near Newfields Art Museum and on 56th Street. The service offers daily, monthly or annual passes for their bikes. The flat rate is $1 plus $0.15 for each minute of the ride. Students can easily walk over and rent a bike to get to Broad Ripple for much cheaper than electric scooters. The canal path runs through downtown, making it possible for students to bike there from campus.

The Student Government Association has an Uber program for students. SGA fully covers unlimited trips to and from the Ascension St. Vincent Medical Campus, Indiana Youth Group and the Julian Center. There is also full coverage of trips to and from the Indianapolis International Airport and the Julia M. Carson Bus Transit Center within three days of the beginning and end of each scheduled holiday break. One perk for students also enrolled in IUPUI through the engineering dual degree program is $5.00 off of rides to and from IUPUI from 7:30 a.m. to 9:30 p.m. Starting this semester SGA is going to offer $10.00 off of two trips per month to Target and Saraga International Grocery.

Senior biochemistry major and President of SGA Cade Chezem spoke about the program.

“[The Uber program] has been around [approximately] three or four years,” Chezem said. “I’ve had a lot of university SGA presidents contact me and be like, ‘Hey, how did you guys set this up?’ So different schools, especially in the Midwest, had been asking about trying to [set up the program] as well. It’s an expensive program, but we know students use it. Especially the airport shuttle and things are really beneficial.”

All students received an email about the program at the beginning of the semester, but the process of signing up can seem complicated. If students already have an Uber account, use the link in the email from SGA, then click the button on the page that says “Join the Account.” Then when going to make a trip, make sure to switch to the SGA profile so it will be covered.

Chezem plans on making the program more well-known around campus and educating students on how to sign up for the service.

“We need to make sure it’s pushed out [so] all students are aware, especially where and how to sign up for it,” Chezem said. “[People] ask me, ‘How do I get enrolled in the program?’ because it’s also hard [to set up]. I think a lot of students — they get the email to sign up, and they’re like, ‘Well, I don’t need that right now,’ but then fall break rolls around, and they’re like, ‘Oh, how do I do that?’ Then we get a lot of Instagram DMs and emails and things like that.”

Junior English major Lauren Varhol, who did not have a car her first year, struggled a bit to get around the city during the height of COVID-19. Varhol relied on friends with cars and Uber to get around Indianapolis. Using Uber was a risk many students were not willing to take during the pandemic. Scooters were few and far between, buses were not an option and bikes can only go so far.

Varhol struggled to find solutions for getting around Indianapolis without a car, but looks forward to utilizing alternative modes of transportation.

“It was a little hard,” Varhol said. “I feel like going to Broad Ripple is a little easier if you have a bike, or there are [more] scooters now.”

Students without cars may feel stuck on campus, but that is not necessarily the case. Bikes and scooters are available to rent around campus, SGA helps offset the cost of Ubers and the bus runs right through Butler. While having a car may seem like the only option, it is entirely possible to get around Indy without one.