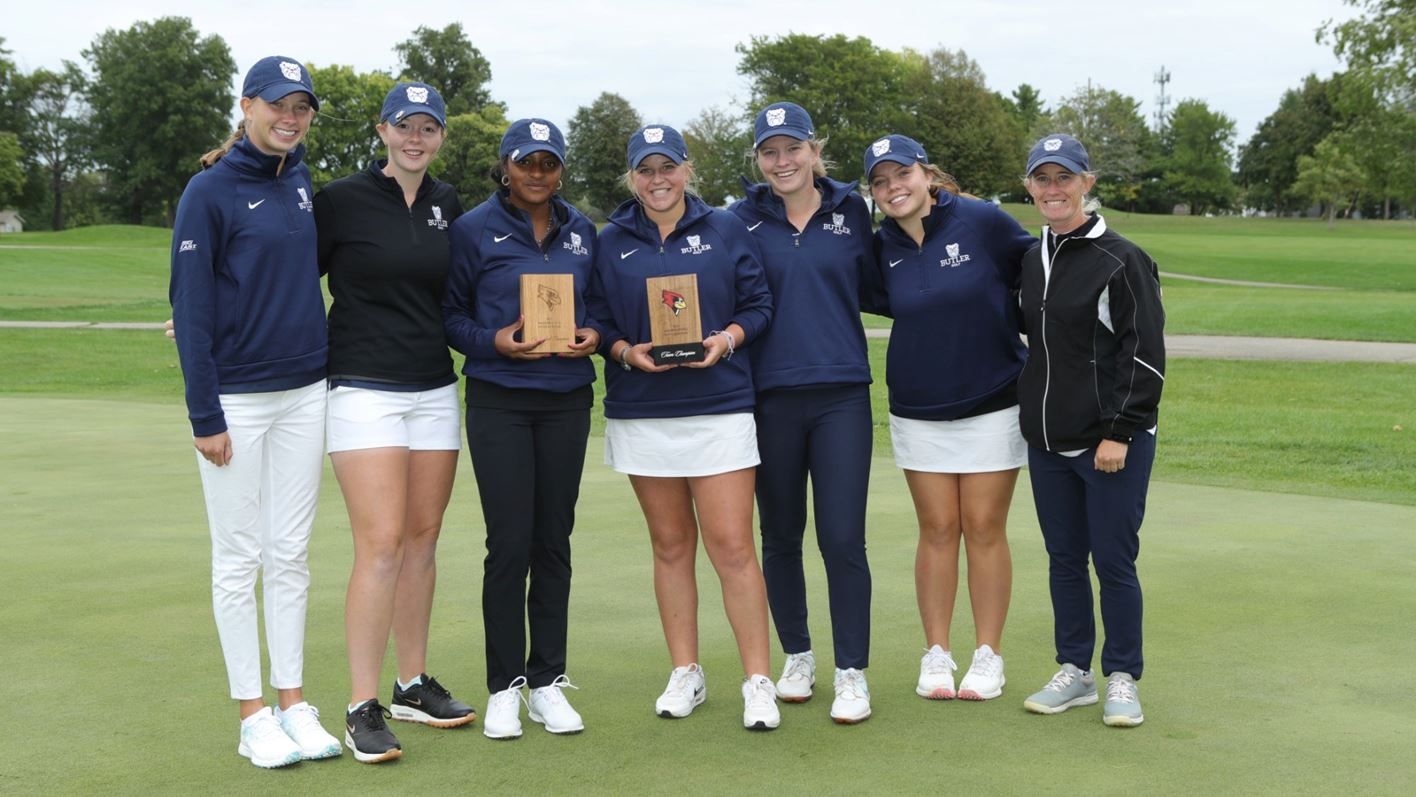 The Butler women’s golf team after they won the Redbird Invitational in Normal, Ill on Sept. 12. Photo courtesy of Butler Athletics.

After a tough 1-0 loss to 22nd ranked Wisconsin, the Butler women’s soccer team came home to play Dayton. After going down 2-0, freshman midfielder Talia Sommer scored a goal in the 68th minute. Unfortunately, the team fell short 2-1 as that was the only goal they put in the net against the Flyers.

Redshirt sophomore Jesse Hamlin and graduate student Barry Keane led the Butler men’s cross country team to second place at the Spiked Shoe Invitational. Both ran times in the 25 minute mark, which secured them good points for the race. Just falling short to Syracuse, the Bulldogs took their second top-three finish of the season.

The Butler men’s soccer team took their first loss of the season being shutout by Ohio State 2-0. The Bulldogs were able to get ten shots on goal but none past the Ohio State net. Freshman midfielder Joost de Schutter led the shot counter with three.

Falling to the host Broncos, the Butler women’s volleyball team lost three sets to one in their opener of the Boise State Classic. After losing the first two sets, the Bulldogs won the third to keep their hopes alive but ended up falling in the last set 25-13. Senior outside hitter Megan Sheridan had 17 kills in the effort.

In their second game of the Boise State Classic, the Bulldogs swept Eastern Washington in three sets to even out their record in the tournament. Just as in the first game, Megan Sheridan had 17 kills and sophomore outside hitter Mariah Grunze had 15 kills as well to lead the team to victory.

Keeping the winning streak alive, the Butler women’s volleyball team finished out their tournament by sweeping Southern Utah. This time, it was Mariah Grunze that led the team in kills with 15. Overall, a 2-1 record in the classic brings the team’s record to 6-3.

The Butler football team took the beatdown to Taylor University with a 45-10 blowout win. Senior quarterback Bret Bushka led the way for the Bulldogs, completing 14 passes for 117 yards and one touchdown while also running for 80 yards and a touchdown as well. The Bulldogs move to 2-0 ahead of their week three game against South Dakota State.

It was the newcomers to the women’s golf team that gave Butler a three shot advantage for first heading into day two. Sophomore Reese Wilson — a transfer from Howard — was tied for a two stroke lead for first while freshmen Kelli Scheck sat alone in fourth place. With the lead the team looked to finish strong on Monday.

The Butler women’s soccer team lost to Northwestern on Sunday 1-0. After the Wildcats scored in the seventh minute, the Bulldogs were playing comeback the whole game. Their best chance was a Katie Soderstrom penalty kick in the 48th minute that was saved by the Northwestern keeper. Good defense by Butler, kept the game close but they ultimately fell short.

After holding a lead heading into day two of the Redbird Invitational, the women’s golf team was able to close out their victory on Monday afternoon. Helping the team win the tournament was sophomore Reese Wilson, who took home first place with a three-shot victory. This was the Bulldogs’ first match of the year and they look to continue this in their next tournament.

After one day of play at the Joe Feaganes Marshall Invitational, the Butler men’s golf team held fifth place in the event. Leading the Bulldogs was sophomore Damon Dickey shooting seven under par on the day. The team also has sophomore Henry Quinn sitting at an even par heading into day two.

The Butler men’s golf team took fifth place at the Joe Feaganes Marshall Invitational. The Dawgs finished with a score of five over par as a whole. Freshman Will Horne finished highest for the Bulldogs, ending tied for fourth place with a score of four under par.