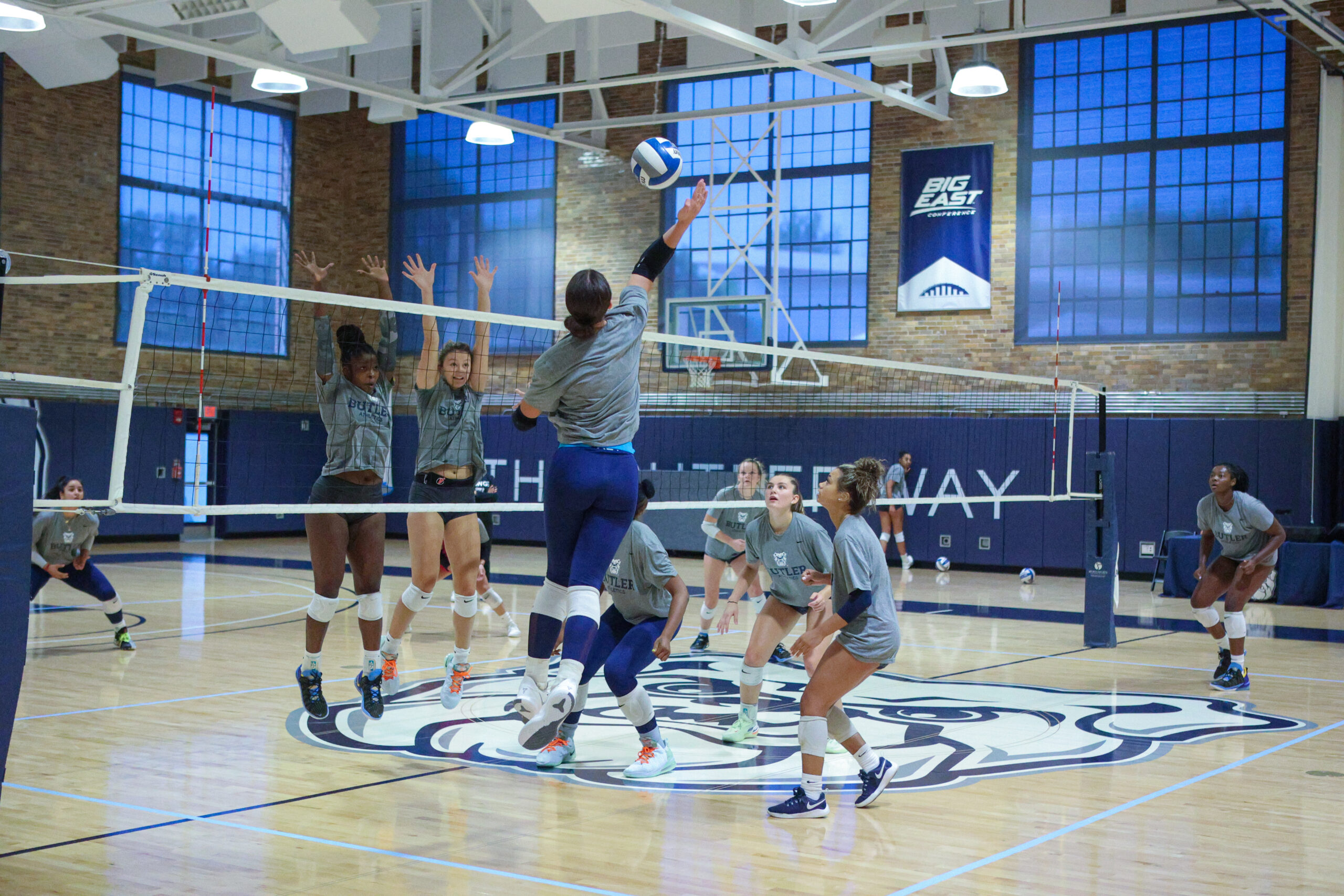 The Butler volleyball team practices prior to the fall 2022 season. Photo by Claire Runkel.

On Friday, Sept. 9 and Saturday, Sept. 10, Butler volleyball competed with intensity at the Boise State Classic in Boise, Idaho.

The team started the weekend off against the host, the Boise State Broncos. Although they lost in four sets, the team battled hard, forcing ties and lead changes throughout the match. The highlight against Boise State came in the third set — the only set Butler won — when the Bulldogs limited the Broncos to a .000 hitting percentage with six blocks to shut down Boise State’s offense. In that set, senior Megan Sheridan led the way with four kills and senior Marisa Guisti and sophomore Mariah Grunze followed with three kills each. Freshman setter Cora Taylor recorded a double-double in the match with 42 assists and 10 digs. The final results of the opening match were 22-25, 19-25, 25-22 and 13-25.

Later that evening, the Bulldogs washed away Eastern Washington in three straight sets. Similarly to the match against Boise State, Butler and EWU battled all the way until the end. In the first set, Butler held an advantage at 23-17 until EWU rallied to force a 24-24 tie. In the end, Butler prevailed and took the set 28-26. In the second set, the Bulldogs got off to a slow start, forcing them to come back from a 7-1 deficit. With six total kills in the set from Sheridan, the Bulldogs took their own lead at 18-11 and won 25-20. The defense limited the Eagles to a .028 hitting percentage. After 19 ties and six lead changes in the third set, Sheridan, Grunze and junior Amina Shackelford combined for 18 of the 25 Bulldog points on kills. Butler finished the day 1-1 with final scores of 28-26, 25-20 and 25-22 against Eastern Washington.

On the final day of the Classic, the Bulldogs picked up right where they left off — sweeping a struggling Southern Utah team in three straight sets. Butler only trailed the Thunderbirds twice, resulting in them being in total control throughout the match. The Bulldogs had various leads of 6-1, 21-15, 16-10 and 5-1 during the three-set sweep. Grunze and Shackelford both hit double digits in kills at 15 and 11, respectively. To go with her 15 kills, Grunze recorded a double-double with 10 digs.  The team finished on a high note with scores of 25-21, 25-20 and 25-16 against Southern Utah.

At the end of the weekend, senior Jaymeson Kinley and Grunze were selected to the All-Tournament Team for their efforts; Kinley had 51 digs and Grunze posted 42 kills with 25 digs.

The Bulldogs will return home for the Bulldog Brawl sitting at 6-3 in the season. They’ll start the Brawl facing Ohio University on Thursday, Sept. 15, at 6 p.m. in Hinkle before starting conference play on Sept. 23.