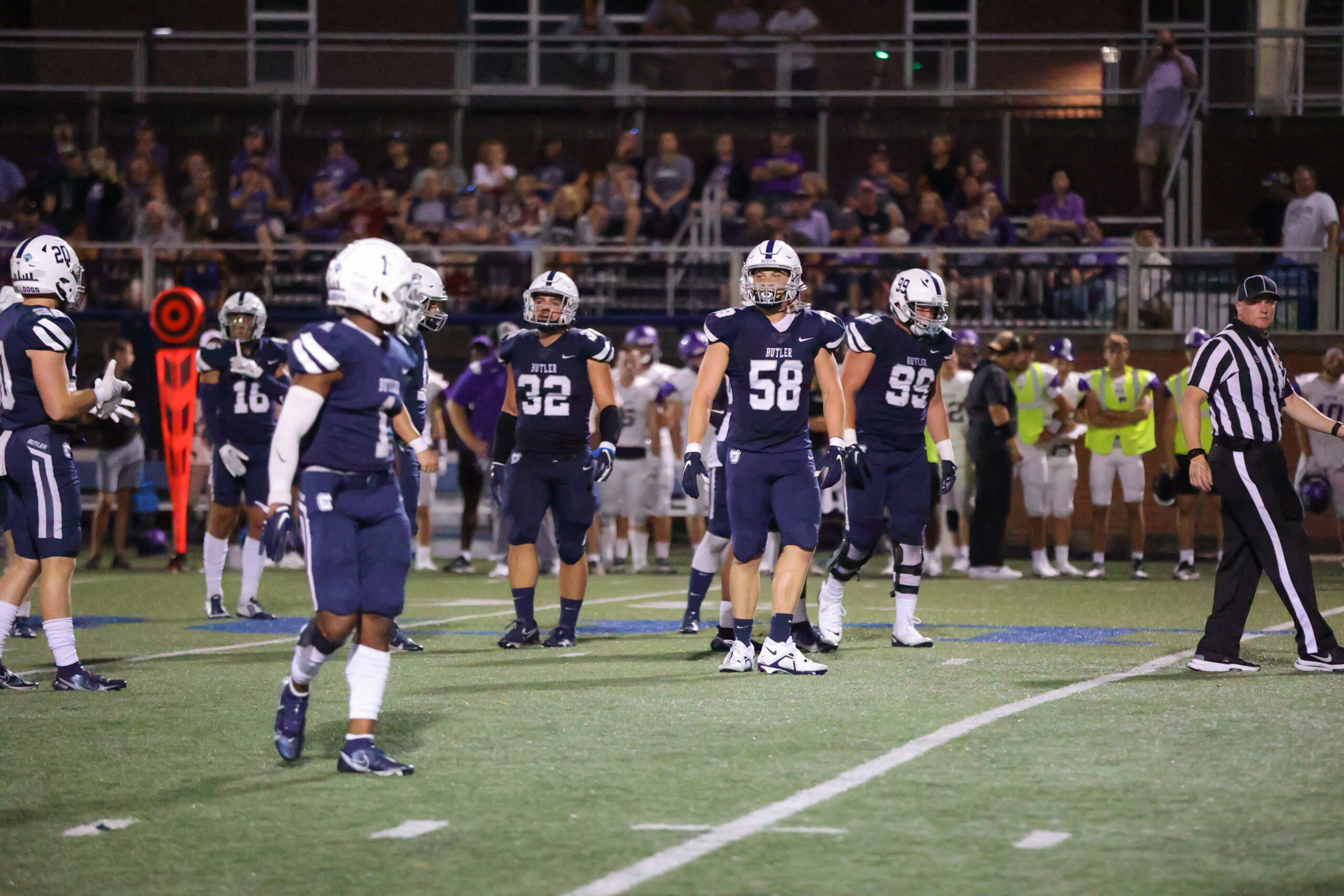 The Butler football team takes the field against Taylor University on Sept. 10. Photo by Claire Runkel.

Men’s soccer vs. No. 15 Indiana University

The newly 20th-ranked Bulldogs will have their biggest non-conference test against No. 15 Indiana University. The Bulldogs enter coming off of a tough loss at Ohio State where they fell 2-0 to the Buckeyes. The game is at 7 p.m. in the Bud and Jackie Sellick Bowl and will be streamed on FloSports and Butler+.

The women’s volleyball team returns from the Boise State Classic coming off a 3-0 win against Southern Utah and will continue their season at home with a match against Ohio University. The match will be played at Hinkle Fieldhouse, with a start time of 6 p.m. It will be streamed on the Butler Athletics Youtube channel.

The women’s soccer team will host Ball State at the Bud and Jackie Sellick Bowl with a 7 p.m. kickoff. The Bulldogs are 3-4 on the season and look to bounce back after a 1-0 loss at Northwestern. This match will be broadcasted by FloSports and Butler+.

After their perfect score of 15 at the Rose-Hulman Twilight and an off-week, the women’s cross country team will head to Illinois State to compete in the Redbird Invitational.

The women’s volleyball team will begin the Bulldog Brawl tournament by hosting Missouri. The match is set for 6 p.m. in Hinkle Fieldhouse. This match will be streamed live on the Butler Athletics Youtube channel.

Ahead of the Butler Double Dual, women’s swimming prepares with an intrasquad scrimmage. This will take place at 8 a.m. in the HRC pools.

The women’s volleyball team welcomes Central Michigan for the first of back-to-back games of the day. The match is set for a 6 p.m. start. This match will be streamed live on the Butler Athletics Youtube channel.

After their big matchup against the Hoosiers, the men’s soccer team will host DePaul. The last matchup between the two teams ended in a 0-0 draw. Kickoff is set for 7 p.m. in the Bud and Jackie Sellick Bowl. This matchup will be on the Big East digital network.

The women’s golf team will travel to University Park, PA. to take part in the Nittany Lion Invitational. The invitational will start on Sept. 17 and run through Sept. 18. The Bulldogs will look to continue their success after winning the team title at the Redbird Fall Invitational.

Softball continues their fall season by hosting in-state opponent Marian for a doubleheader. First pitch is scheduled for 12 p.m. and will take place at the Butler softball field.

Football at No. 3 South Dakota State

After a blowout win against Taylor, Butler will go on the road to face the Jackrabbits. South Dakota State played Iowa tough last week and Butler will have a difficult assignment ahead of them. The game is set to take place at 7 p.m. in Dana J. Dykhouse Stadium in Brookings, South Dakota.