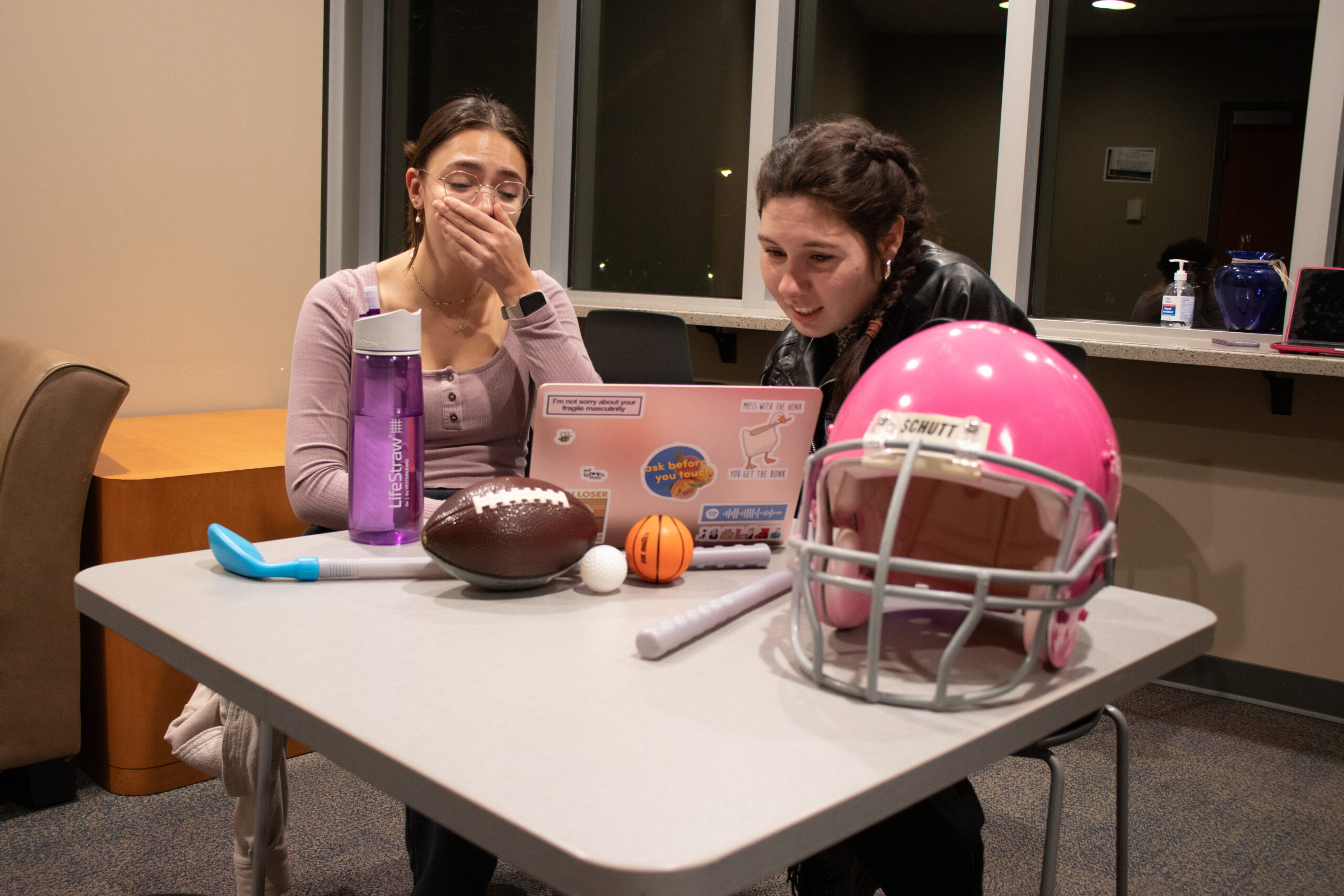 When you think about the kind of people who are willing to stay up until 2 a.m. on a Tuesday night in efforts to publish the student newspaper on time, it’s unlikely that muscled-up, Bang-guzzling creatine fiends come to mind. Perhaps you’re correct in assuming that the majority of the Collegian’s editorial staff is not hitting the gym five days a week, but deep beneath our sore fingers and tired eyes lies an innate athletic prowess.

It might seem obvious that the members of the sports section are more predisposed to physical feats, but the rest of our staff — news, culture, opinion, etc. — are not as naturally gifted on the surface. We have exiled ourselves from participating in sports by opting to spend our time clicking and clacking, but we’ve been watching, learning, preparing — even if only subconsciously. With each hour spent in the Collegian office, the editorial staff absorbs the knowledge of the sports editors simply by being in close proximity to them.

At this point, the sports editors’ expertise has been fully siphoned out of their basketball-loving brains. Neither Devin Abell nor Kobe Mosley can even recall the difference between offense and defense, and they have signed over power of attorney for their section to the co-opinion editors in a desperate attempt to meet the paper’s deadlines.

That’s right: Caitlin Segraves and Katie Freeman have taken the reins. We definitely know what we’re talking about, but if we have to talk sports, we’re taking the entire editorial board with us in our first foray into reporting on the world of athletics — if we didn’t, their subconscious preparation would be for naught.

Our editorial board is bursting with athletic potential, yet their prowess has been ignored for far too long in favor of overtime musings, previews and recaps. We’ve taken the liberty of selecting the most obscure sports and assigning each editor to the ones we feel they would excel at, effectively kickstarting their athletic careers. They can thank us later, preferably at their Olympics award speeches.

If you thought we included this to make some sort of joke about the practicality of college courses, you would be wrong. This is actually a very practical and incredibly important class you can major in. Underwater basket weaving is exactly what it sounds like, you’re in the water with scuba-like conditions and gear, weaving a basket. Apparently it’s good to soak the reeds while you weave them.

While our lovely culture co-editor Mae-Mae Han is, in all reality, very dedicated to earning her PharmD, we can’t help but imagine the buckets of money she could earn by getting into underwater basket weaving. Forget all of those silly little equations, Mae-Mae would absolutely dominate at memorizing all of those weaving patterns. Her attention to detail and awe-inspiring ability to focus make her an amazing editor — and an even better underwater basket weaver.

Picture this: your favorite childhood game but harder. It’s just like the regular game of tag except the playground is an obstacle course and it’s just you trying to “tag” the other opponent.

Not surprisingly, we had to give one of the more “traditional” obscure sports to one of the sports editors. We fully anticipate that you could drop Devin Abell into one of these games and he would hold his ground. Unsure if he would win it all, but we wouldn’t be surprised.

We never imagined we’d watch a sport that could easily take place at ALDI, but this competition features the fastest grocery clerks we’ve ever seen. The National Grocers Association hosts an annual championship pitting supermarket employees against each other in a grocery-bagging contest, and while the 2021 winner had his items squared away in almost a minute, we think we know someone who could do it even faster.

Every single week, culture co-editor Emma Quasny leaves the Collegian office before any other section, right alongside Mae-Mae Han. We watch from our opinion desk in wonder and awe, revering their editing speed. For that reason, she would make for an excellent speed-bagging champion. It’s also worth noting that not unlike a pageant queen, a champion of this kind of national visibility must be able to serve as the face of an organization — and as next year’s editor-in-chief, she’s got that in the bag. Ha.

Putting ice skates on a sailboat — sadly, this sport fails to involve real yachts — can apparently send you speeding down an ice pad at up to 60 miles per hour. These frozen watercrafts race against one another, skating towards the finish line.

We think Maeve Van Etten, our multimedia editor, could absolutely outzoom the competition. When it comes to putting together packages, it can often become a race to meet deadlines, especially if the weather happens to interfere with plans to film an outdoor standup.

Think of an air mattress, and then make it big enough for two teams to play on. Add a trampoline in the middle, string up a net and you’ve got yourself a Bossaball court. Players with the privilege of standing at the net catapult themselves to great heights via the trampoline beneath them, which ultimately leads to the ball being smacked really f*cking hard. It’s like volleyball, but different.

Two of the Collegian’s managing editors, Francie Wilson and Henry Bredemeier, have bickered about pretty much anything and everything all year long. Apparently, there’s no beef; it’s all jokes. We asked for clarification, and they’re fighting again — about what, we don’t even know. We’d rather these two settle it on the Bossaball court.

For those uncultured in the world of recreational equestrianism, a hobby horse is one of those toy horse heads on sticks. In this sport, participants jump hurdles of pretty impressive heights while riding one of those bad boys. Let us tell you — these people sure know how to gallop.

It’s honestly more impressive than feats of a run-of-the-mill hurdler, as they aren’t required to hold a toy horse. Somehow, this reminds us of our news editor Alison Miccolis, as she holds the massive task of fleshing out the largest section of the Collegian each week. Just like those riders, she is not horsin’ around.

Not only is this sport extremely physically demanding, requiring months of training, but it also forces you to reconsider your outlook on the existence of human kind. Man versus horse marathon sounds simple at first, and it is to some extent, since it is just a marathon between people and horses. But once you begin digging into it, you uncover the possibility that a person’s greatest skill may be endurance running.

Which is kind of funny considering both of our endurance’s are sh*t. However, for superpeople like Emma Beavins, a six-mile run is just a fun way to wake up. If anyone on the Collegian could ever conceivably beat a horse in running, it would be her. The fact that the entire sport makes you reexamine your understanding of human beings, in the very same way she challenges the way you would normally think about issues, which makes it that much more fitting.

Ironing is generally simple. However, as the name implies, this sport takes the task of removing wrinkles to an extreme. Participants in the World Extreme Ironing Championship can be seen ironing while balancing on a paddleboard, dangling off of a rock wall and hanging upside down. At the core of this mission lies an important goal: tending to the details while under pressure.

Our design editor, Amelia Maxwell, spends her Tuesday evening ensuring the print pages of the Collegian are crafted without error. Each page must be carefully overlooked, lest we misprint a date or forget to italicize a caption. She faces a tight deadline: this feat takes place in a matter of hours, yet she never cracks. Sounds pretty similar to an ironing champ, if you ask us. It also helps that Amelia happens to enjoy rock climbing — which means she could most likely handle adding an iron into the mix.

We won’t lie — the ability to toss around pizza dough so effortlessly and gracefully is truly a form of art. The true purpose or intended outcome of this competition is negligible. The only thing that matters is the beauty of spinning pizza dough as the pizza-dough-spinner advances what was previously thought as humanly possible.

Obviously, Sophie Ciokajlo, assistant editor for news and ballet major, is the best person on staff who has enough skill and grace to be able to compete with these dough-handling wizards. The rest of us have slowly shrimp-ified, hunching our shoulders closer to our laptops and losing muscle mass every day we remain sedentary, clickety-clacking away. But Sophie? She’s been growing stronger in our weakness, with her posture easily humbling all of the rest of us.

Imagine a bunch of lumberjacks all trying to cut faster than one another, and that’s Timbersports. Contestants use tools including axes and handsaws verging on four feet long in their race to chop wood.

In our opinion, chopping wood seems pretty grueling. What else is grueling and potentially harmful? Writing news stories. The news section requires harder work and longer hours than every other section. For that reason, assistant news editor Gabi Morando could definitely handle Timbersports. It can’t be any harder than what she already does.

In this sport, firefighters do firefighter things, just without the fire. In one challenge, they can be seen dragging a 175-pound mannequin down a race course, removing them from hypothetical danger as quickly as possible. In another, they are tasked with hauling a 40-pound hose up five flights of stairs.

Much like the firefighter aggressively dragging the dummy to safety, Ellie Allen drags the rest of us dummies — and the entire newspaper — to safety. She’s the last set of eyes on every piece, anxiously ensuring we don’t get sued.

Listen, it sounds ridiculous but Popgopalooza is actually very impressive. What was originally intended to be a source of chuckles, developed into a fully respectable sport similar to pole-vaulting. It’s just on a pogo stick.

All we’ve gotta say is keep your eye on co-sports editor, Kobe Mosley. It can’t be explained, but he would absolutely crush the competition. Between his impressive knowledge of sports, athletic ability and natural calmness — he would shoot past the competition.

Swim out of the way mermaids and make room for the mermen. Evaluation for the mermen competition is based on an aquatic photoshoot, swimming competition and two fashion shows — one in traditional swimsuits and one in costume.

Our assistant multimedia editor Ethan Polak holds an appreciation for the aquatic realm. He has a particularly positive disposition towards dolphins, which are probably distantly related to mermen. We figured that if he enjoys sea creatures so much, then he’d probably also enjoy being one. He’d blow the competition right out of the water.

Do what you will with this information, knowledge is power.