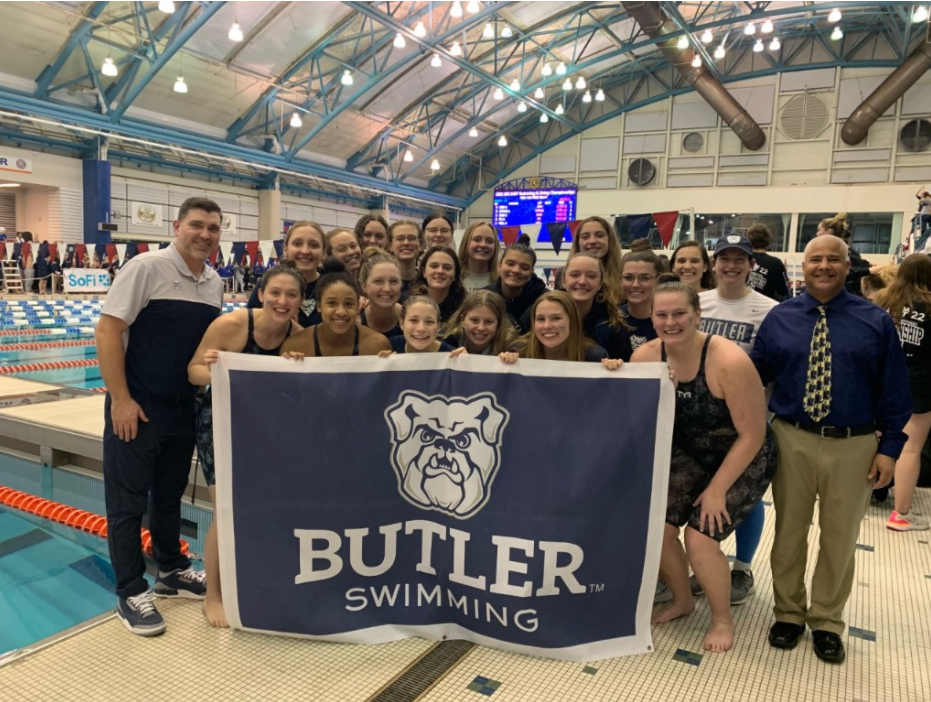 The Butler women’s swimming team poses for a picture after finishing sixth overall in the Big East championships. Photo courtesy of Butler Athletics.

The women’s swimming team placed sixth overall in the 2022 Big East championships over the weekend. Freshman Alani Hightower-Bend broke the school record in the 100 meter back and posted the second best time in school history for the 100 meter fly.

The men’s basketball team fell short Wednesday night against Seton Hall, 66-60. Butler almost completed the comeback — which was carried on the back of forward Bo Hodges who finished with a career high 25 points. This loss put the Dawgs 13-16 on the year and 6-12 in conference play.

The women’s golf team finished in 13th place this weekend out of 18 teams that participated. Graduate student Ally Ross led the team with the best score, shooting 10 over par. Kennesaw State won the tournament with a team score 865.

The men’s track team placed fourth over the weekend. Sophomore Issac Kane set a new program record in the 200 meter dash with a time of 21.35. The 4×800 relay team also set a new school record with a time of 7:36.34. The men’s team finished four points out of second place behind DePaul, with UConn winning the meet.

The women’s tennis team hosted Eastern Michigan and defeated the Eagles 4-1. The No.1 duo of Natalie Boesing and Delaney Schurhamer won 6-3. Then, No.4 Norah Balthazor and Veronika Bruetting won 6-3 to clinch the opening point. No. 1 singles Sara Linn won her match 6-4, 6-2 to clinch the match for Butler.

The Eastern Kentucky game was canceled due to weather. The second game against Northern Illinois went in favor for the Huskies by a final of 10-3. Right fielder Kaylee Gross led the Bulldogs going 3-4 with an RBI and a run scored.

After getting swept by Murray State last week, Butler looked to bounce back in the Jackson State tournament. After falling behind 5-0 in the fourth inning, the Bulldogs would go on to score six unanswered runs capturing the lead after right fielder Scott Jones singled in the top of the seventh. Butler held on to win the game 6-5.

The women’s basketball team fell 72-36 against the Villanova Wildcats Friday night. The Wildcats had yet another great performance by the second-leading scorer in the country, junior forward Maddy Siegrist. She scored 31 points on 13-18 shooting and 5-8 from 3-point land. Butler was led by Celena Taborn who scored 12 points on 6-8 shooting.

Butler collapsed on the road against Marquette on Saturday, losing 64-56. The Bulldogs were leading the game 33-30 at half, but watched that slim lead evaporate due to their 16 turnovers that led to 22 Marquette points.

The Golden Eagles went on a 14-4 run to take the lead and never surrendered it back. Marquette was led by guard Darryl Morsell who scored 16 points. Butler’s leading scorer was Bryce Golden who scored 14 points on 6-10 shooting. This loss extends Butler’s losing streak to four and sinks the Dawgs to 13-17 overall and 6-13 in conference.

The Bulldogs played Chattanooga to start off their doubleheader. Butler scored their lone run from a home run by sophomore Monique Hoosen. After that it was all Chattanooga, who scored 11 unanswered runs with 10 of them being scored in the third inning.

In their second game against Southern Illinois, the Bulldogs rode a five-run third inning to win 7-2. Three of those runs came from junior Mackenzie Griman, who hit a three-run home run. Monique Hoosen also hit her second home run of the day. Senior Karli Ricketts pitched a complete game and only allowed two runs.

Butler played Prairie View A&M to open up their doubleheader and handily 10-1. The Bulldogs collected 13 hits and scored 10 runs. Butler’s pitching allowed one run from a solo home run. For the rest of the game, Butler allowed eight hits, two walks and struck out six hitters.

For their second game, Butler played a second game against Jackson State and won 2-1 to close out their weekend. Starting pitcher Aaron Barokas threw six scoreless innings, allowing two hits and striking out seven hitters. He went on to win the Big East honor roll for the second week of the season.

Shortstop Travis Holt would join Baraokas on the honor roll list. The graduate transfer had a .538 average and an on-base percentage of .625, while scoring four times, he walked twice . Additionally, Holt stole three more bases to raise his season total to five.

The Bulldogs headed to Purdue University on Sunday. They were cleanly swept by the Boilermakers 5-0. Delaney Schurhamer won her first set 6-3 and was leading 5-4 before the second match would go unfinished.

The Dawgs played Central Michigan and lost the match 11-16. Junior Campbell Connors scored a hat-trick with two ground balls. Senior Holly Hall would contribute with her own two goals. Junior Greer Bireley dished out three assists for the Dawgs.

Butler fell to Georgetown 69-48 on senior day. The Hoyas jumped out to an early 17-7 lead after the first quarter. Butler kept it close in the second quarter tying the score at 17 a piece, and Georgetown held onto a 10-point lead at half.

Due to an explosive third quarter from Georgetown, the Hoyas pulled away and they won the game. Butler had three players in double digits — sophomore Emilia Sexton had 11 points, forward Celena Taborn scored 10 points and freshman Trinity White also had 10 points.

The women’s lacrosse team was blown out in a road trip down Louisville, Kentucky, 22-8.

The Cardinals jumped out to an early 4-0 lead and extended it to 8-1 by the end of the first quarter. Following Katey Attaway scoring two quick goals to start the second quarter, the Cardinals retaliated by scoring three goals of their own in under two minutes. The Dawgs added three more goals from Lindsey Schreiber, Greer Bireley and Leah Rubino before heading into halftime, trailing 14-6.

The third was a defensive battle with only two goals being scored in the last ten minutes of the quarter. The fourth quarter began with the Cardinals scoring two early goals, but then the rest of the quarter mirrored the third. Kayla Kielbasa added a goal for the Bulldogs in the final quarter.

Attaway finished the contest with a hat trick and one assist for the Dawgs — notching her second multi-goal game of the season.

The baseball team fell short of a comeback, 13-8, in a road trip down to North Kentucky University. The Norse hit three home runs in the second inning to take a 5-0 lead, and then scored three more runs in the third to gain an 8-0 advantage.

The Dawgs would close the gap with an RBI single by Billy Wurch in the fourth inning and five runs in fifth. Aaron Stienart would tie the game in the seventh inning at 8-8 with a two-run home run — his second of the day.

The Norse would respond with four runs on four hits in the same inning, and one more in the eighth inning to ultimately seal the contest.